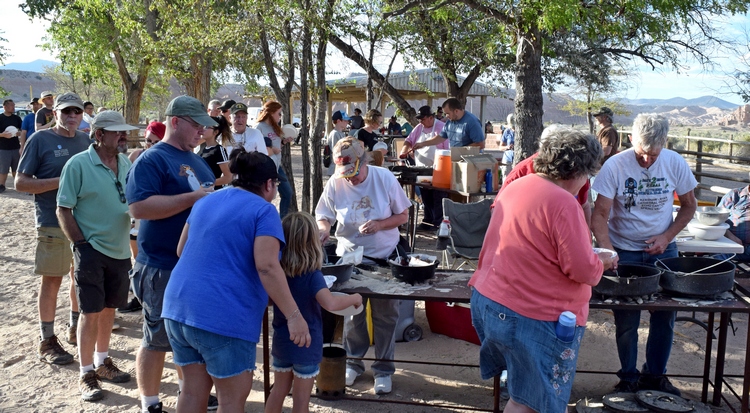 Some of the over 200 people who attended the Dutch Oven Cook-Off at Cathedral Gorge State Park on Sept. 15 came from far away, without even knowing the event was going to take place. Such was the case with a man and his family from Texas and a woman on vacation from Italy.

Park interpreter Dawn Andone reported about 20 cooks prepared 40 dishes broken into four categories for judging: bread, dessert, side dish and main dish. A panel of six judges made the decision for first, second and third place, then all in attendance voted on the People’s Choice winner.

Of those who were at the cook-off from faraway lands, Monia Diguinmi from Italy said she had been attending a business conference during the week in Las Vegas and, after the conference ended, decided to take about an extra week for a bit of vacationing. She had been to the Grand Canyon, then decided to go camping at a few state parks in rural Nevada. She said she rented a car, a tent and camping equipment, and off she went.

She had arrived at Cathedral Gorge that same day and decided just to see what was going on. “It was very nice, with good food and friendly people.”

The cooks were not all local people, either. Several were from the Vegas area, including Douglas Schmidt and Paul Dicianno, who said they have come up the past four years. “It’s enjoyable. We get to feed and interact with people. It’s a lovely day each time we come.”  Neither man is a full-time cook. Schmidt is a mechanic and Dicianno works for a carpet cleaning business.

Jack Olsen and his wife were on vacation from their home in a suburb of Houston, Texas, visiting a sister who lives in Douglas County, Nevada. He said the family and some other friends were camping at Cathedral Gorge.

“We had come to Nevada last year also,” he said, “and my sister was telling us how great all the Nevada State Parks are. So we made plans to come back this year and do a camping trip. We had heard of the flood Cathedral Gorge had experienced in July, thought we might not be able to come here, but just recently learned it is open again, so we decided to come. I didn’t have any camping gear, so I went out and bought a motorhome, drove 2,000 miles from Texas to Nevada with four other people, and we are caravaning across Nevada.”

He said, “We just happened to be here at the same time the Cook-off was taking place. We all even signed up as judges at the Visitors Center, because I’ve had experience as a judge for barbeque cook-offs  in my area of Texas, but we were not selected as judges here. A new experience for me, my first Dutch Oven Cook Off, and a great community event.” 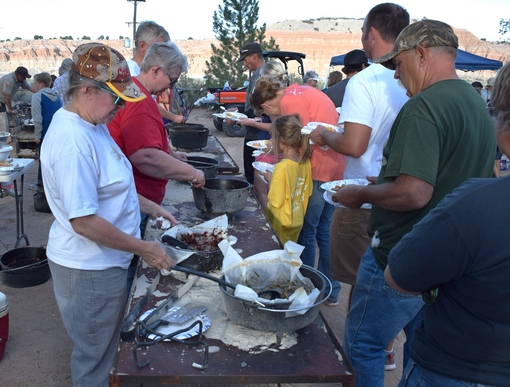