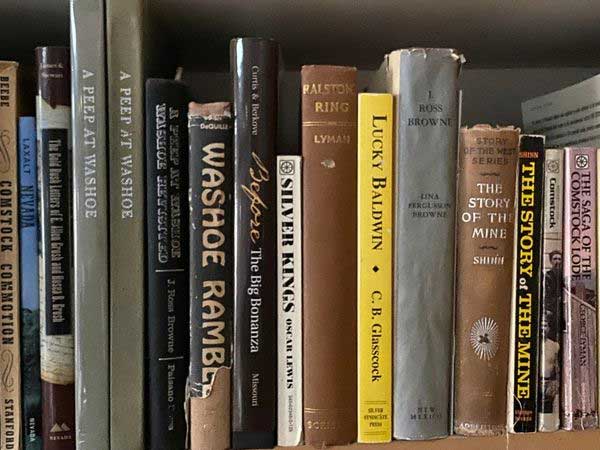 Ten years ago I wrote a piece about essential books for your Nevada Bookshelf. When I came across it recently and decided to update it, it occurred to me that because lots of likely candidates have been published in the meantime and we humans don’t all share the same taste, I could ask fellow Nevada lovers for their picks.

I sent a request for one, two or three favorite Nevada books to 76 people I was confident would have worthy favorites. They responded with more than 60 titles, enough to fill a whole bookcase, several of which were suggested multiple times. I should have asked for a two or three sentence description of each title and I will if I do this again in another ten years.

But even without descriptors you’ll recognize many of them, and if you poke around online you’ll be able to find more about almost any title that looks intriguing. Not all of them — I wanted a copy of The Last Free Man (about Quejo, I believe) but couldn’t find it for sale anywhere. While building this list I bought 4 books online. I invite you to do the same and report the outcome in the Comments below.

If you have a favorite or two to share, add it as a Coment below and I’ll add them to the list I have also taken the liberty of adding the forthcoming David Toll’s Nevada. I’d be proud to have it on your Nevada bookshelf. Details here. 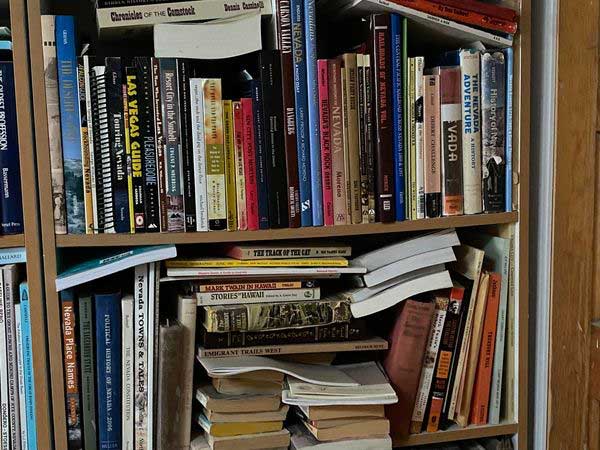 20 Miles From a Match by Sarah E. Olds

At the Sands by David G. Schwartz

The Backyard Traveler: 54 Outings in Northern Nevada by Rich Moreno

Basin and Range by John McPhee

The Bloomin’ Desert by Juniper Rose

The Bonanza King, John Mackay & the Battle over the Greatest Riches in the American West by Gregory Church -2-

Bones Set Against the Drift by Bill Cowee

The Carpetbaggers by Harold Robbins

Conflict on the Carson by Grace Dangberg

Don’t Skip Out on Me by Willy Vlautin -2-

Fear and Loathing In Las Vegas by Hunter S. Thompson

Fighting Back by James McMillan

The Genesis of Reno by Jack Harpster

Ghosts Of The Glory Trail by Nell Murbarger

The Green Felt Jungle by Ed Reid and Ovid Demaris

A Guide to the Rural Regions by Cynthia Delaney

The Gold Rush Letters by Ethan Allen Grosh and Hosea B. Grosh

The History of Nevada (2 volumes) by Samuel Post Davis.

I Want to Quit Winners by Harold Smith

In The Shadow of Fox Peak by Catherine S. Fowler

The Main Event by Richard Davies

Martha and the Doctor by Marvin Lewis

My Adventures With your Money by George Graham Rice

My Memories of the Comstock by Harry Gorham

Nevada A Journey by Jonas Dovydenas

Nevadans, The Spirit of the Silver State by Stanley Paher

No Limit: The Bob Stupak Story by John L. Smith

Railroads of Nevada and eastern California by David Myrick

Reno, Las Vegas, and the Strip: A Tale of Three Cities by Eugene Moehring

The Roar and the Silence by Ron James

Roughing It by Mark Twain -5-

The Saga of the Comstock Lode by George D. Lyman

The Saga of Lake Tahoe by Edward B. Scott

The Silver Short Line: A History of the Virginia & Truckee Railroad by Ted Wurm & Harre Demoro

Smoky by Will James

The Story of the Paiute People by Sarah Winnemucca

Survival Arts of the Primitive Paiutes by Margaret M. Wheat

Territorial Lawmen of Nevada, Vol. I by Bob Ellison

The Track of the Cat by Walter Van Tilburg Clark