Colorful tales of the American West don’t fade away easily, even when they seem to have been discounted. Take, for example, the story of legendary red-haired cannibal giants whose alleged existence in the Lovelock area centuries ago has been debated for more than 100 years. 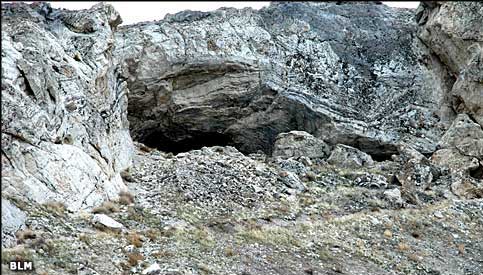 Scientists have said there’s no proof the “giants,” first described in old Indian tales, were cannibals. Chemical staining by earth after burial was advanced as a likely reason why mummified remains have red hair instead of black like most Indians in the area.

A University of Nevada study in the mid-1970s indicated the “giants” were about six feet tall, and not up to 10 feet tall as had been claimed. What was left after that was evidence of a tribe separate from principal tribes whose Paiute descendants live here — perhaps a wandering, more aggressive but outnumbered band finally hunted down and killed or chased off.

Anthropologists say the story, while somewhat tamer, is still fascinating. But they concede the old myth has more appeal and, no matter what they say, will probably persist.

The mid-1970s study was conducted after a bundle of bones, marked “giant bones,” were found in a long-overlooked cabinet at the Nevada Historical Society building in Reno.

The late Sheilagh Brooks, who chaired the anthropology department at UN-Las Vegas, analyzed the bones which apparently came from the Lovelock Cave, a treasure trove for scientists trying to reconstruct Nevada’s early history.

Dr. Brooks said her investigation showed that some of the bones were from cows, not giants. The human bones appeared to be remains of Indians “maybe six feet tall — big, but not that big,” she said.

The myth was written down in 1883 by Sarah Winnemucca Hopkins, daughter of a Paiute Indian chief. She told of a strange, red-haired tribe of cannibals her ancestors drove into a cave and suffocated by lighting a fire at its entrance.

She said the “people eaters” were so fierce they would leap into the air, snatch arrows whizzing over their heads, and shoot them back at their enemies. The Paiutes named the giants Si-Te-Cah, which translates to tule-eaters. The giants wove tules, a fibrous water plant, into rafts to navigate across what remained of Lake Lahontan, so the story goes.

The Paiutes, a Native-American tribe indigenous to parts of Nevada, Utah and Arizona, described the Si-Te-Cah as a vicious, unapproachable people that killed and ate their captives, and told early settlers that after years of warfare all the tribes in the area joined together to rid themselves of the giants.

The fleeing giants took refuge in Lovelock Cave and refused to leave despite demands that they come out and fight. So their pursuers filled the entrance to the cave with brush that was set on fire in a bid to force the giants to come out. The few that did emerge were promptly killed. The giants that remained inside the cavern were asphyxiated.

John T. Reid, a Lovelock mining engineer, said Indians took him to the cave in 1886 and told him the tale of the red-haired cannibal giants. But when he entered the cave he found nothing but tons of bat guano.

Reid was unsuccessful in getting an archaeological dig started immediately. But miners, realizing the value of guano as fertilizer, started hauling it out in 1911. They promptly turned up bones, baskets, weapons, tools, duck decoys, various other artifacts and what they described as a 6-foot-6 mummy. James H. Hart, one of the miners, wrote that the mummy, found in the north-central part of the cave about four feet down, had hair that was “distinctly red.”

The discovery spurred an archaeological dig in 1912, followed by a second dig in 1924. Thousands of artifacts and about 60 average-height mummies were recovered. Not all the mummies were preserved. One of the best specimens reportedly was boiled and destroyed by a local fraternal lodge that wanted a skeleton for initiation purposes. More studies followed, including radio-carbon dating that showed the cave was occupied from about 2,000 BC to about 900 AD.

Adrienne Mayor wrote about the Si-Te-Cah in her book, “Legends of the First Americans.” She suggested that the ‘giant’ interpretation of the skeletons from Lovelock Cave and other caves in Nevada was started by entrepreneurs setting up tourist displays. She also noted that hair pigment is not stable after death and that various factors such as temperature and soil conditions can turn very dark hair rusty red or orange.

All that may be so. But try convincing readers who love a good tall tale.