Most Famous Engine in Movie History, Star in 100+ Films 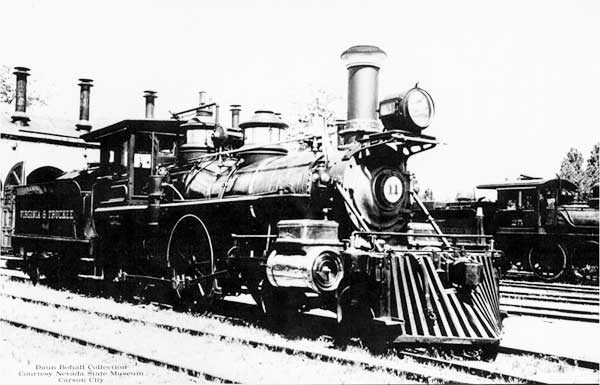 The most historic existing icon of Nevada’s past, the 150-year-old Virginia & Truckee Railroad steam locomotive Reno, has made its final run full circle, returning home to Virginia City, where it originally operated from 1872 – 1938.

The famous engine, featured in more than 100 Hollywood films and productions and reputed to be the most photographed locomotive in American history, has taken residence on the same tracks where it transported passengers from Reno and Carson City to Gold Hill and Virginia City on the Comstock Lode.

Tom Gray, owner of the Virginia & Truckee Railroad, responding to echoes from the Old West and family tradition, secured the famed No. 11 engine for Nevada posterity as the last V&T engine in private hands. He purchased it August 13, 2021 from Old Tucson Studios with plans for a full restoration, then a highly anticipated return to film use along with three historic coaches originally used in the movie classic, Gone With The Wind.

“It’s home again as a premier Nevada historic object — it’s outlived everybody and deserves to be recognized,” Gray noted. “It’s as authentic Nevada as anything we have today.”

The engine’s original journey began when it ordered by the V&T as No. 11 and rolled off the assembly line at the Baldwin Locomotive Works in Philadelphia in 1872, bound for Carson City. Ulysses S. Grant had just been re-elected the 18th United States president. The V&T ordered the ornate American style 4-4-0 engine (wheel arrangement classification) to pull its highly varnished passenger trains between Reno and Virginia City. Upon arrival, she was christened by the V&T as Reno.

Proud of their new addition, the crews attentively kept her bright metal work – the brass handrails and domes, polished and the engine spotlessly clean, earning her the nickname, “Brass Betsy.”

In 1875 she began leading the daily San Francisco-bound Lightning Express train and she plied the line between Reno and Virginia City until 1924 as the centerpiece of the V&T. During that time, Reno was thought to have transported four U.S. Presidents: Grant, Rutherford B. Hayes, Theodore Roosevelt , and ex-president Herbert Hoover, along with silver barons, the wealthy, Comstock fortune seekers and the public.

In 1938, with war on the horizon and rail traffic at an all-time low, V&T leased the engine to Hollywood so she could be preserved on film in the epic movie, Union Pacific by Cecil B. DeMille.

In 1945 Reno was sold to MGM Studios, then in 1970 to Old Tucson Studios as the centerpiece of its Old West operations. A fire there in 1995 ended its useful life as a movie star. The rusting hulk was cosmetically restored for use as a prop, imagined to never run again under its own power – until now.

Tom Gray followed his father’s journey along the tracks and shared the same dream to bring the V&T back to life. In 1972, following a successful business career, Robert C. Gray assumed abandoned V&T property in Virginia City. It seems Reno captured his imagination as a young man – it certainly captured his heart as he was a passenger on its final trip to Virginia City in 1938.

He ran his first popular steam tourist train on July 2, 1976 and improved the V&TRR the next 50 years, active as president until he was 95, two years before his passing in 2019. As more history would have it, Tom acquired Reno the day his father would have turned 100.

Led by the Grays’ efforts, along with the Nevada Commission for the Reconstruction of the V&T Railway, the original 16-mile right-of-way between Carson City and Virginia City was rebuilt, then reopened in 2009 for summer weekend rides.

Thanks to the movie industry, Reno retains many of its original parts and all the brass. Reno, 149 years after the V&T originally ordered the No. 11, is once again home on the line she was built for.

About The Virginia & Truckee Railroad: It’s the most famous of all American short lines. In its heyday, as many as 45 trains arrived and departed Virginia City. Completed in 1869, the V&TRR hauled millions of dollars in gold and silver from the famous Comstock Lode. Today, it operates 100-year-old steam engines and heritage diesel locomotives departing from the original 1870 deport in Virginia City and features a schedule of holiday and themed rides. Conductor-narrated trains take passengers through bonanza mines, tunnels and ruins.