If I had a time machine, my first journey (after taking care of some personal business) would be to Goldfield. I’d set the chronometer to arrive on the morning of July 4, 1923. I’d have breakfast at the Palm Cafe and take in the Independence Day parade, still spectacular even though Goldfield had been slipping noticeably for a dozen years.

Afterward I’d stroll around the great city and have a beer at the Northern Saloon, even though Tex Rickard was long gone by then. On that day he was in Shelby Montana, promoting a 15-round Heavyweight Championship prize fight between the champ, the former saloon fighter Jack Dempsey, and challenger Tommy Gibbons. A round-by-round account of the fight was telegraphed to the Goldfield News office and posted on the wall for an interested crowd that cheered as Dempsey took the decision.

I’d book a room at the Goldfield Hotel, maybe have dinner in its great dining room. And in the course of my perambulations I’d find out what I could about the clandestine bootlegging operation across the street. I’d strike up an acquaintance with its operators if I could, and I’d do the same at the fire house a block away. The next day I’d be back urging the distillery workers to be extra vigilant during their nightly production. At the firehouse I’d warn of fire across from the hotel during the night. Then I’d stand watch, ready to raise the alarm.

So maybe I’d be able to prevent the early morning explosion that caused the great fire, or at least to help snuff the fire before it raged across the city, fed by blustery winds, destroying 53 blocks at the heart of the city.

It was the biggest single loss of historic structures in Nevada history, and if it hadn’t happened Goldfield would still be one of the greatest attractions in the American West.

Of course if I could devote myself to using that time machine to preventing fires, I could save pre-1875 Virginia City, prevent the arson fire that destroyed so much of Hamilton in 1873 and the second one that took the White Pine County court house in 1885. I could prevent the 1908 fire that took so much of Rawhide, save Virginia City’s International Hotel in 1914, the Carson City Opera House in 1931 and the Nixon Opera House in Winnemucca in 1992.

But even with a time machine I couldn’t have pevented the earthquake that destroyed the old structures on Front Street in Wells or the rising real estate values that prompted the demolition of so many other historic structures around the state. Could I have persuaded the Directors of the Virginia & Truckee Railroad not to take down Gold Hill’s Crown Point Trestle in 1938? Highly doubtful. Could I have made the case against suspending operations altogether in 1950 by explaining that in just 30 years the public interest in the historic railroad would make it profitable again? Probably not. Thirty years is an eternity to a railroad sliding into bankruptcy.

The loss of so many of our state’s treasures makes the relics which survive even more valuable. They have been rescued, often at considerable cost, by individuals and organizations. The Fourth Ward School in Virginia City has never been in better condition, the Mint building on north Carson Street, now the State Museum, is filled with visitors every day, and the 1891 brick post office next to the Nugget casino now houses the Nevada Commission on Tourism but 45 years ago it was proposed for demolition to make room for a shopping mall.

In most of Nevada’s mining towns there are still old structures swooning into the sagebrush, but fewer and fewer. The abandoned relics of olden times, the ones that haven’t been swept away by fire or modernization, are nearly gone.

Fifty years ago our state was a living lesson in the history of the American West. Since then most of what were once shabby and increasingly delapadated buildings have been straightened up and spruced up. Only a few of them are still drooping slowly to the ground. In Virginia City, thanks to the stringent architectural requirements of the Comstock Historic District, the old city is showing something, although much diminished, of its appearance when it was still “the richest place on earth.” Where there were once whole neighborhoods of shabby houses, there is now only one little house remaining to suggest that Virginia City is a ghost — and it is scheduled for demolition as a safety hazard. 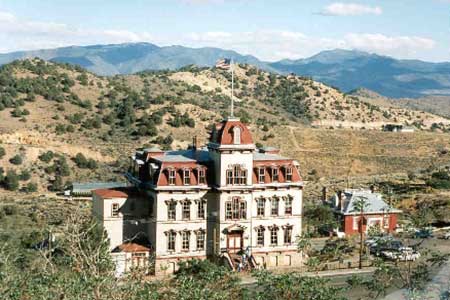 But here too major structures have been saved. Saint Mary’s in the Mountains was rescued from the combined assault of decades without maintenance and defacement by a minimalist order of priests who stripped the old structure of its rich appointments and took them to the dump. The Fourth Ward School was closed after graduating its last class in 1936 and is now a beautifully restored and enhanced museum. The V&T railroad was brought back to life in the 1970s and has now been extended to the east side of Carson City, Piper’s Opera House, long abandoned and empty, is once again filling with audiences, and Henry Piper’s house on B Street, built after the great fire of 1875 and deserted for more than a a century later, is now a restored and modernized bed & breakfast.

And if you appreciate these remnants of our pioneer past and wish there were more, let’s get to work on that time machine.