Once as elegant a hotel as graced anyplace in the Western states between San Francisco and Denver, the Mountain View Hotel in Pioche has fallen into such a state of neglect, disrepair and abandonment it has been deemed, “Unlivable unfixable, a public nuisance.”

But other local residents do not feel that way, and efforts to save the historic building are beginning to come forward by a number of local residents, with additional help being sought from other sources including Nevada Preservation, an organization out of Las Vegas. 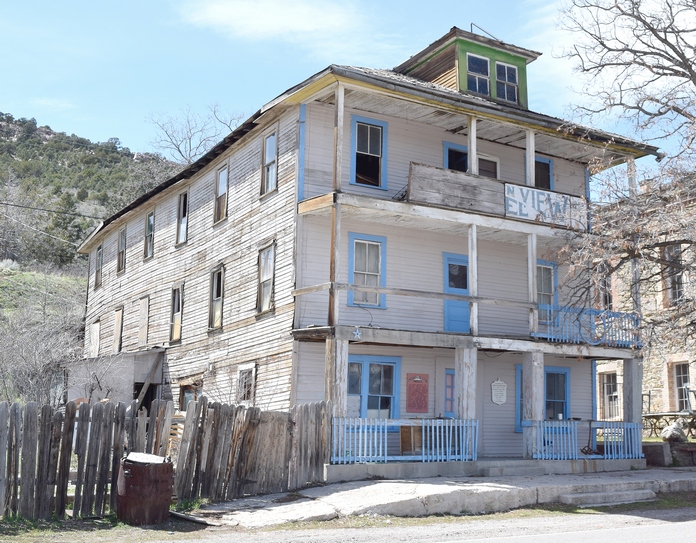 Closed for decades, ownership of the building was taken over by the county last April, and commissioners decided to wait for a year to see if any interested groups or individuals might come forward, before deciding to have the building demolished.

County Commissioners have thought it should be torn down. Chairman Varlin Higbee said last April that it “ought to be torn down. It’s a liability. It’s going to fall on somebody.”

County Planning and Building Director Cory Lytle even noted that in 2006 the commission board did vote to tear it down, but that was never done.

Admittedly a real mess inside, the roof has a big hole in it and the inside walls are falling down, plus the back of the building is being pushed aside by the weight of the dirt hill behind it on which McCannon Street goes along above the hotel.

Truthfully, it’s a shame to see the historic building, part of the colorful past of Pioche, in such a state is deterioration and disrepair.

At a recent county commission board meeting one local man referenced a newspaper article in regards to the history of the hotel from the April 18, 1914 issue of the Pioche Record, praising the beauty, first class elegance and  fine service displayed at the hotel, as well as possessing, “one of the finest views on the American continent … [seen] from the porch of the Mountain View Hotel.”

But now a group of local people have been enlisting the help of preservation groups like Nevada Preservation of Las Vegas, who have explained about grant funding that might be obtained to at least get the roof repaired and the façade of the building cleaned up so it won’t be such an eyesore to tourists who come to visit the famed Million Dollar Courthouse Museum, which is right next door.

The Mountain View Hotel had three stories and sported 18 rooms. Three hot meals were provided daily. It also housed many juries who had come from many miles around the county to attend trials at the courthouse.

A plaque on the wall of the front porch reads: “This hotel was built in 1895 by the Ely Valley Mines to house their guests, and lays claim to such overnight guests as (U.S. president) Herbert Hoover, Nel Murbarger (a famous author of the Old West), many U.S. Senators and Nevada governors, and many other notables. The food, the wines, the accommodations and unmatched service was renowned throughout the old west.”

President Hoover, a former mining engineer before his days in politics, had mine holdings in Pioche.

So, when you next visit Pioche, come and see the Mountain View Hotel right next to the Million Dollar Courthouse. Maybe it won’t be fixed up yet, but it does look like plans are in the works to save the historic building and keep it standing.

Check out Save the Mountain View Hotel in Pioche, NV on Facebook.