When are you coming to Lincoln County again? Soon, we hope. And as you come to the Hiko Junction, where U.S. 93 and SR 375 intersect, there is a new, more attractive tourist billboard to see.

It is more interesting than the old one that has been on the same wooden frame structure for many years. This new sign is double-sided, whereas the old sign was only single sided, and it has a slightly different message on each side.

It replaces two other signs at the same location that were not nearly as good, and faded so badly in only two or three years as to be unreadable. They had come to look more like a single-sided blank white board in need of something.

Ben Rowley of Nevada Central Media, was commissioned by the Lincoln Communities Action Team to design the artwork for the new sign. He said, “LCAT has been working on ideas to improve the old sign for several years. After obtaining a $6,250 grant from the Nevada Commission on Tourism and a $5,000 donation from the Lincoln County Room Tax Board, we were able to move forward with developing a new sign.”

He said the plan was to have a double-sided sign, instead of just a single side that only those heading north could see. Now, motorists who are southbound and coming into the Pahranagat Valley, might take an interest in what the valley has to offer, as well as those heading to the north, east or west. “Ultimately,” Rowley said, “we want to install solar lighting on the sign so it can be seen at night as well.” 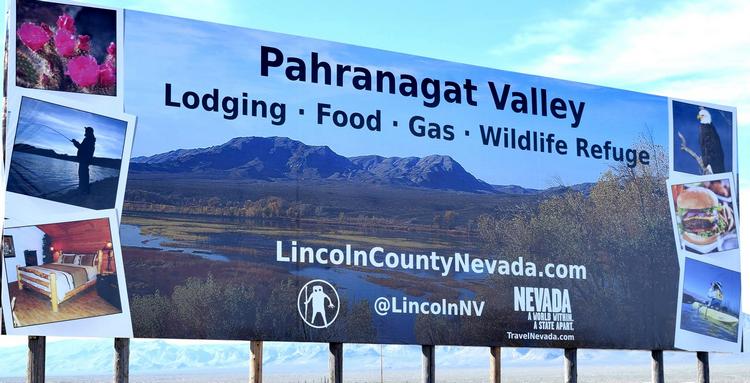 The sign was manufactured by Verry Best Signs of Las Vegas. Additional paneling was added to the backside to make the wood frame structure more secure.

Lincoln Communities Action Team president Marcia Hurd said, “We’re very excited about the sign because it stands out so well. I think it’s awesome. It stands out so beautifully, and now when motorists are coming from Caliente, we actually see a sign, the new backside, a wonderful addition. We used to look at that old faded blank board and cringe. Now, with the new sign, we want to cheer, and we are very excited to be able to be involved in that.”

There is more to do in Lincoln County than you might think, and that’s all the more reason to come. Five state parks to visit, the Pahranagat National Wildlife Refuge, several popular fishing areas, hiking trails, and soon to be a trailhead in Caliente for about 35 miles of Intermountain Bicycle Association trails.

Of course, there is the historic old west town of Pioche, with its own historic Million Dollar Courthouse, Thompson Opera House, and legendary Boot Hill, and not too far away the ghost town ruins of Delamar.