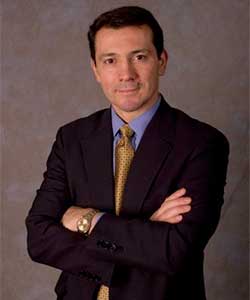 In September 2017 the Carson City TEDx committee chose Corrado De Gasperis as a speaker for an event at the Brewery Arts Center. When residents of Silver City expressed dismay and explained that their honored guest was preparing to dig a pit mine into their historic Nevada community, the TEDx committee refused to believe they’d been bamboozled.

The Silver City folks decided against making a public protest lest it reflect badly on the Brewery Arts Center. Mr. De Gasperis papered the house with $100 tickets to his friends, and the Tedx talk went on as scheduled.

The point here isn’t his talk — you can watch the video and write your own review in the comment box below (please) — but that Mr. De Gasperis insinuated himself into the TEDx program with a combination of halftruths, bafflegab, makebelieve and omissions, and the well-meaning but credulous TEDx folks didn’t check him out. Here’s how they introduced him:

We are very honored to have Mr. De Gasperis present at TEDx CarsonCity 2017. 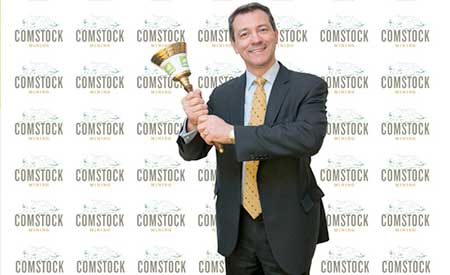 Corrado De Gasperis brings over 30 years of transformational business management experience, aggressively leading the turnaround of three industrial businesses, one global, one continental and most recently, one regional.

Prior to his own personal transformation, Mr. De Gasperis was a certified public accountant with KPMG LLP. He served many major companies like General Electric and Union Carbide Corporation. KPMG announced his admittance into the partnership, as a Partner, effective July 1, 1998, when he left to help turnaround a global, industrial giant and save it from bankruptcy.

He is currently the Executive Chairman and CEO of Comstock Mining Inc., a diversified network of activities that include mining, construction, real estate, hospitality, and technology based activities, working together and coordinated as one system, with a common goal.

His approach utilizes a transformational methodology founded on the algorithmic combination of two profound, systemic theories of management, Dr. Edward Deming’s “Theory of Profound Knowledge” and Dr. Eliyahou Goldratt’s “Theory of Constraints.” These methods are knowledge-based and use logic-based thinking tools for identifying, surfacing and resolving organizational conflict and enabling a critical chain of activities towards a meaningful goal. All methods are philosophically and practically systemic.

Mr. De Gasperis most enjoys transforming businesses from an unfocused, hierarchy-based organizational model mired in budgetary controls and cost accounting-based measurements INTO a systemically designed organization, inspired by statistical predictability and throughput-based growth. Mr. De Gasperis believes that these types of “systems” are not only sustainable, but self regulating and evolutionary. He also believes capitalism must evolve or capitalism will not sustain.

CMI arrived in 2010, proclaiming itself as “Revitalizing the Comstock”. and began tearing up the landscape in a transformationally methodological way. Over the years since then, the company has become far and away the Biggest Loser in the History of the Richest Place on Earth.

The algorithmic combination of two profound, systemic theories of management has resulted in the company spending nearly a quarter of a billion dollars of investors’ money — $235,997,979 at last count — with never a dime of profit.

As CEO of Barzel Industries, Mr. De Gasperis had an earlier adventure with self regulating and evolutionary systems inspired by statistical predictability. A Google search tells the tale —

On February 13 2009 —
Corrado De Gasperis, Barzel’s CEO, stated, “Today, 30 years after the birth of the company, Novamerican Steel is shedding the final vestiges of its out-dated past and publicly marking the start of our very different journey. Our focus is on the needs of our customers and we are demonstrating that reliability and quality of goods must not come at the expense of speed of delivery. Our goal is to maximize the throughput (that is, the speed at which we generate cash through sales) from our one, fully integrated network of processing, manufacturing and distribution facilities.”

Then, 7 months later, after applying a systemically designed organization to its out-dated past, inspired by statistical predictability and throughput-based growth —
Barzel Industries, the Massachusetts-based metal manufacturer, filed for bankruptcy on September 14, 2009, in the United States Bankruptcy Court for the District of Delaware. One of the initial documents Barzel filed with the Bankruptcy Court is a Declaration in Support of First Day Pleadings (the “Declaration”). According to the Declaration, as of the petition date Barzel has 600 employees working at 15 different manufacturing and distribution facilities in the U.S. and Canada.

Quite the turnaround. It was one of the abandoned 600 employees who christened him so unforgettably “Corrupto De Gasbag”.

For another perspective, the comments on the Yahoo Finance ‘Conversations’ page over the past couple of years, most of them from investors, don’t say anything about the Theory of Profound Knowledge or the Theory of Constraints. They are more direct.

10/9/19 – Constant failure after failure. The only certainty is the share price trajectory. Delisting could be around the corner, again.

9/24/19 – i’ve been here since the Goldspring days and used to be a large shareholder. the one thing that has been constant through the years has been management’s dishonesty. ask yourself if you think corrado has leveled with shareholders. everything is always rosey and wonderful while your investment is going down the drain. my posts are designed to tell shareholders the truth. bashers dont do that. if you refuse to listen to both the positives and negatives of a stock, you should not be investing.

8/12/19 – Casey Serin sure knew how to pick a winner. Jeez louise. What a long term toilet flusher of value this one has been.

But the fact that his cockamamie management theories are disastrous in practice is only the most obvious part of De Gasperis’ story, the part that measures the value of CMI as minus $236,000,000.

Whether their methods are philosophically and practically systemic or not, successful mining companies confine their operations to localities where there is ore. Ore is a mineral from which a metal can be extracted for profit, and CMI has spent most of the last ten years demonstrating that there is no ore in Gold Canyon these days. It has rich dirt to spare, but as CMI has also demonstrated, there is no money in mining rich dirt even if you have a lot of it.

Another interesting part of the story is how De Gasperis has kept CMI alive through nine years of steady and seemingly overwhelming losses by performing one miracle after another to pull it back from the brink. Even as the company accrued stupendous losses for the stockholders, Corrado’s  generous paychecks arrived on schedule — has a parasite taken over its host? 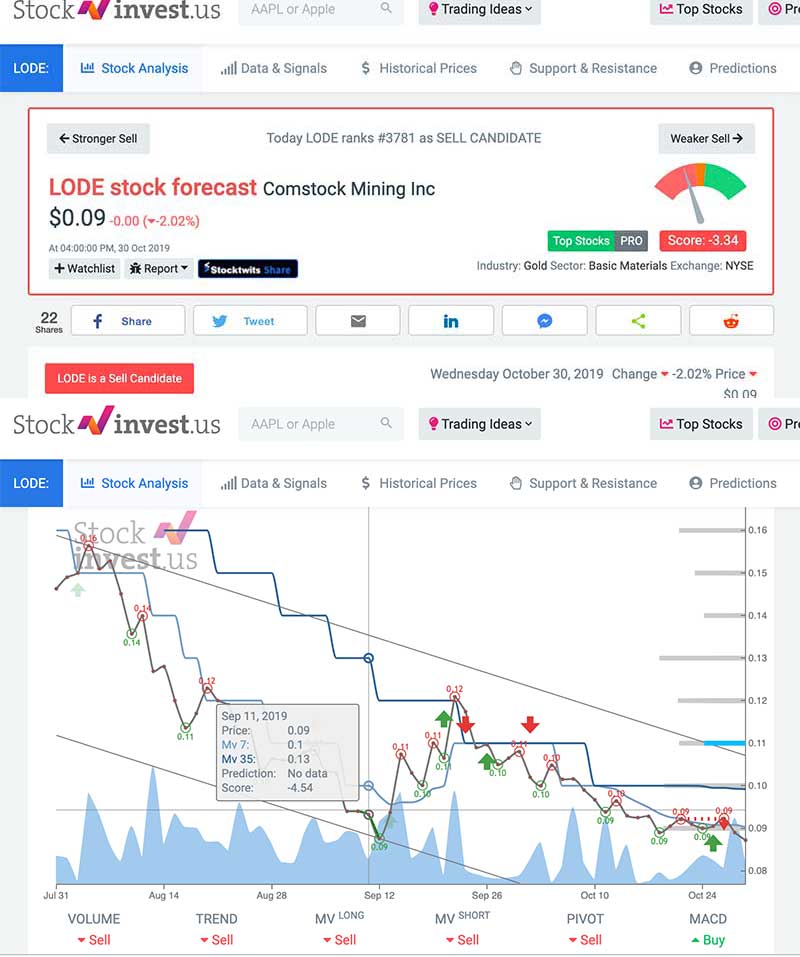 In February 2019 another big miracle began shaping up as the company announced it has formally signed agreements to sell its non-mining assets in Silver Springs, including the previously unsaleable 98-acre certified industrial site and “related senior water rights and the purchase agreements and options on the 160 acres of land and water and sewer rights”.

Most of the company’s announcements over the rest of the year had to do with coaxing its smaller partner, Tonogold [TNGL] toward carrying out the agreement to take over majority ownership of the Lucerne Project from CMI. In August CMI announced the sale of its Storey County mining properties, except the reduction works in American Flat, to its erstwhile partner, Tonogold Resources, Inc. (“Tonogold”) (OTC: TNGL).

Having bragged on arrival that it was “Revitalizing the Comstock” CMI now seems poised to slip out of Storey County altogether, leaving behind a legacy of mistakes and misbehaviors that ought to embarrass the Nevada Mining Association but doesn’t.

And then — sit down now, here’s a surprise — Sierra Springs Opportunity Fund, Inc. (basically DeGasperis rounding up investors) was established to take advantage of the “Opportunity Zone” where people with too much money can get a tax break.

So, a company formed and managed by De Gasperis will use investors’ money to buy the non-mining properties CMI hasn’t been able to sell until now. (Anything in this for the CMI stockholders? Just kidding.)

Apparently no-one on the disbursing side of the Opportunity Zone objects to the self-dealing. It’s one thing for the well-intentioned TEDxers, inexperienced in the ways of the world, to be hornswoggled by a practiced dissembler. But the Lyon County Commissioners know Mr. De Gasperis and his management record very well (some of them, past and present, are implicated in the accusations of wrongdoing now being scrutinized at the Nevada Supreme Court).

Mr. De Gasperis’ resume is replete with failure — how could he have been put in charge of an important county asset?

But don’t worry. As soon as he algorithmically combines two profound, systemic theories of management, he will transform this property from an unfocused, hierarchy-based organization mired in budgetary controls and cost accounting-based measurements, and put the Silver Springs Airport on its exciting new trajectory.