When it was announced that Nevada’s Bicentennial Wagon Train would make its first stop at Silver City on its way to Valley Forge, local BiCentennial Committee Chairman Grahame Ross, proprietor of the Golden Gate Bar and a Generalissimo in the Silver City Guard, vowed to make the occasion memorable.

He called out the Guard.

The Silver City Guard had been wiped out by Indians at the Battle of Pyramid Lake in 1860. and revived 90 years later to participate in local photo ops and Carson City’s annual Nevada Day parade. The splendidly-uniformed troopers were routinely honored with a First Place Award in the Armed Rabble category.

Preparations were hasty since confirmation was received only the day before that the wagon train would set out on Tuesday, along with two Winnebagos, a Mayflower moving van, and a pickup truck hauling santi-huts. 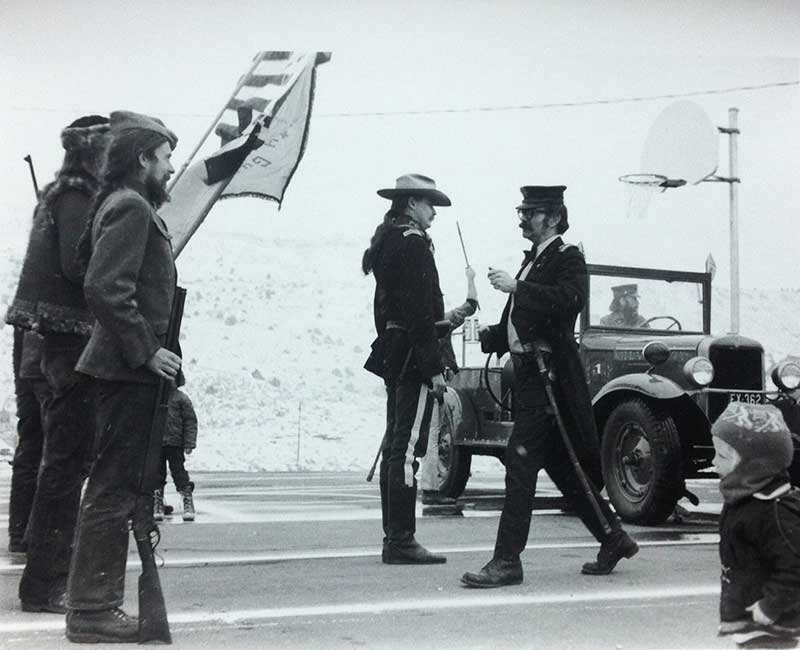 On the morning of the action, the Guard operated with its usual efficiency and by 11 o’clock a few sleepy troopers had straggled into the command post. Scout Charlie Wade was detailed to track the wagon train in its slow desert advance upon Silver City. Lance Corporal Jason White manned the message center and Captain “Clicker” Clark-Slocum prepared at the bar for the rigors of desert warfare.

Cannoneer Greg Melton brought the heavy artillery from Sutro on the back of his motorcycle and rammed home a double charge of black powder.

Wing Commander Beaupre reported that by a stroke of bad luck the Silver City Air Force had been sold for scrap the week before and would not be available for action. Clad in buckskin and furs, the flinty-eyed flyboy said his command would serve as infantry instead. 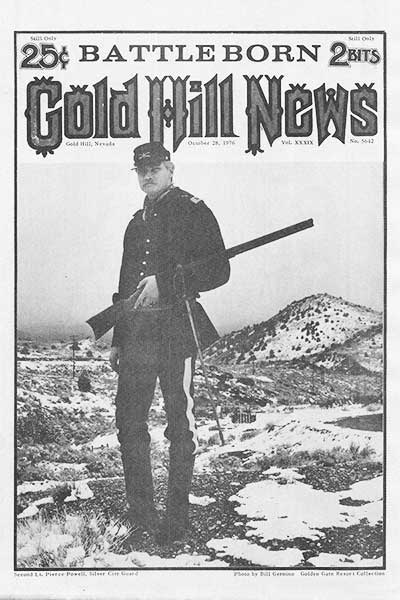 By noon, troopers were pouring into the command post and the entire community was taking on a festive air. A soldier in the khaki puttees and garrison cap of the Rainbow Division was swapping war stories with a Fire Zoave in bright blue pantaloons and a maroon fez. Lieutenant Powell, clad in the battle fatigues of Custer’s Seventh Cavalry, was debating tactics with a man in the dress uniform of the Bulgarian Border Patrol, who scraped idly at the flecks of rust on his shotgun. The veteran soldiers inspected themselves and their natty uniforms before the mirrors. Field Marshal Park was so sharply attired, in fact, that he cut his thumb and needed a Band-Aid, thus becoming the first and only casualty of the day. He was later awarded the Order of the Purple Thumb.

The Wagon Train, its passengers and protectors parched by the dust raised by the horses and by the exhaust fumes from the highway, stopped at Sam’s Place in Mound House for beer. There, Scout Wade daringly infiltrated their ranks.

“Captain,” Wade whispered over the telephone at the back of the bar as Clark-Slocum called for quiet in the command post “They’re traveling about five miles per hour and Doc Holiday’s .45 is the only loaded gun.”

Clark-Slocum cried gleefully “You’ll get your stripes for this!”

“Captain,” Wade whispered tearfully over the telephone, “I am drunk and surrounded by the enemy!”

“Bad news men,” said the Captain said, as he hung up the phone “Our scout is bombed.”

He jumped lightly down from the barstool. “Come on, Lieutenant!” he barked. “Let’s have a look at the terrain!” He and Lieutenant Powell sped off into the desert in the Guard’s pink 1961 Lincoln Continental convertible Command Car.

When they returned, it was with grave news: Plan A was no good without air cover. “Plan B, Gentlemen!” Slocum cried. “And remember — let the Sani-Huts through and then we hit em!”

Fifteen minutes later Scout Wade stuck his head in the door.  He looked around the dim interior as the troopers of the guard readied for action. Some were practicing strangleholds, others saber thrusts; half a dozen were doing the Ghost Dance, and three men were singing “Lily Marleine” at the bar.

“All right,” said Wade as he ducked back outside again, “this is going to be easy.”

Recruits continued to report for duty as the last telephone report was received: “Wagon Train heading north from Pellegrino’s Junction, passing between Lace Lounge and the Craft Guild.”

With cheers the troopers snatched up their weapons, rushed out the door and climbed up into the back of Lt.-JG Dailey’s flatbed truck as their wives and children gazed up at them in admiration and wonder.

“The kids are playing with it, sir!” a trooper replied and the Guard was on the march.

“Captain! Captain!” Private (Brevet Major-General) Thomas called to Clark-Slocum from the back of the truck “Tell me the plan! I’ve got to have a plan or I’ll go crazy once we start.”

But the captain’s reply, if reply there was, was lost in the roar of the engine as the truck moved off toward the front without him. Clark-Slocum was last seen at the center of an excitedly milling crowd of women, children and dogs.

The trucks and sedans unloaded their troops at the top of the hill south of the Y and hurried home as the Guard melted into the landscape. Lt. Powell’s battalion settled behind the rocks at the top of the ridge, the others, under Major-General Allander with the cannon, concealed itself in the shade of a big juniper on the other side of the highway.

As the wagons continued their slow approach around Delamare’s Curve, the sweating troopers cast anxious glances back over their shoulders, hoping for a glimpse of their valiant captain.

At last they caught sight of him marching up from the Y, striding proudly at the head of a gaggle of the town’s women and children. The troopers watched in amazement as their commander, followed by their wives and kids, trudged up on the north side of the hill while the wagon train plodded up from the south, each out of sight of the other.

And just when it seemed as if Clark-Slocum would be late for his appointment with destiny, the Guard, without a spoken command, moved to the attack.

A thunderclap shattered the air as the cannoneers let fly from beneath the juniper tree.

The gaping teamsters and outriders drew their animals up short. 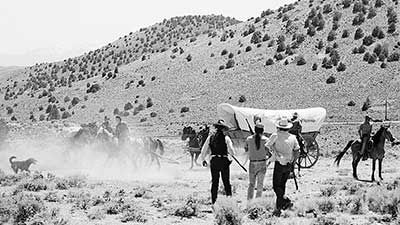 The troopers on the ridge boiled up out of hiding and charged down the rocky slope. Armed to the teeth and stoned to the eyeballs, they came leaping and screeching through the sagebrush.

“Whiskey!” they cried, “Whiskey and Loot!” 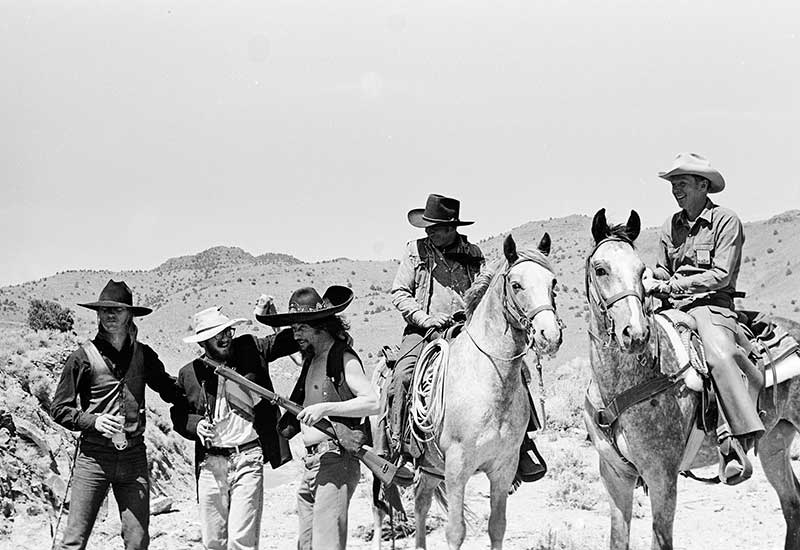 And Captain Clark-Slocum, with his gaggle of non-combatants at his heels, gestured the wagons grandly off the road to accept their surrender. Obediently they went as the Guard ringed the wagons in silence.

“Sir!” said Captain Clark-Slocum to Wagonmaster Bill McClure, “Consider yourselves under the protection of the Silver City Guard. My troops will escort you and your train into our community.”

The Guard raised a triumphant cheer and exchanged friendly greeting with the puzzled Bicentennials as they untangled their horses and clattered the rest of the way into town. Darius Jahaver climbed aboard one of the wagons with his banjo and set the march into Silver City to music.

Capt. Slocum then thanked his troops for their long and faithful service and dismissed the Guard. 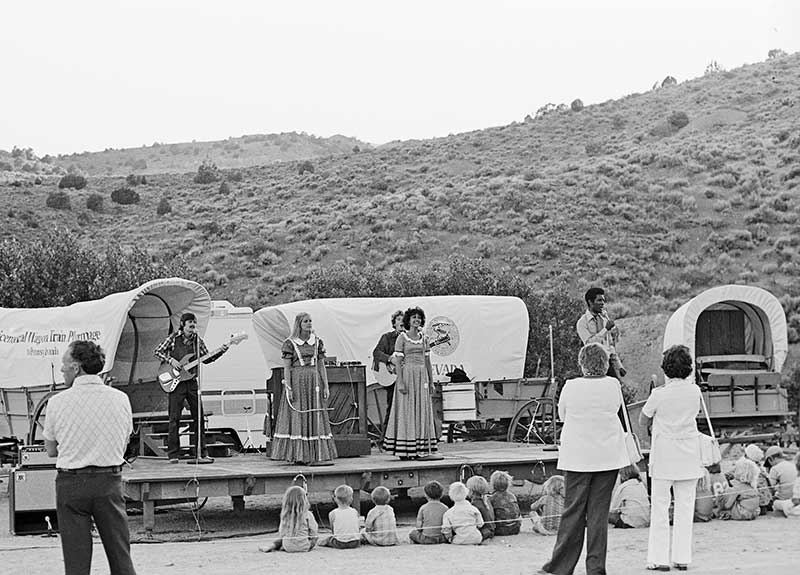 Silver City is the smallest Bicentennial Community in the USA.