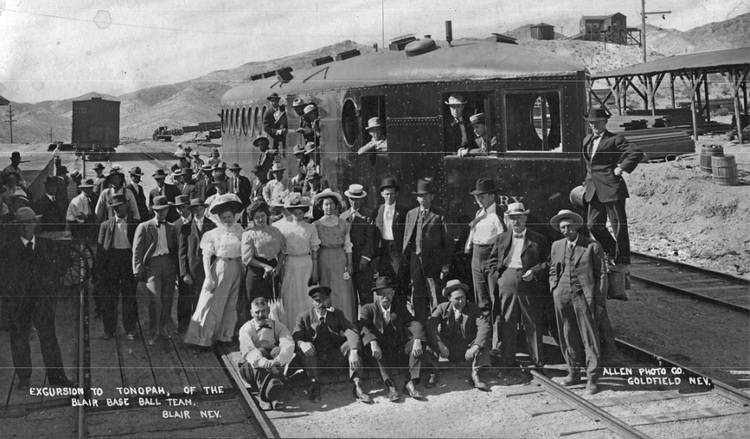 The Virginia & Truckee Railway was not the only Nevada short line to own and operate one of William R. McKeen’s progressive, steel motor-cars. Nor was it first: the short-lived Silver Peak Railroad at Blair had bought their 55-foot car No. 12, the Mary, from McKeen in 1908. (This photo is from the NSRM archives.)

The Silver Peak opened in 1906 and operated 17½ miles of track in Esmeralda County – from Blair to the Tonopah & Goldfield Railroad at Blair Junction. The line primarily served the 120-stamp Silver Peak mill. Operating with a two-man crew, the passenger-and-baggage motor car’s leisurely trip over the line took 45 minutes. The fare was $1.75 and in 1912 passengers averaged three per trip.

Dismantling of the mill of the Pittsburg Silver Peak Gold Mining Co. at Blair began late in 1916 and railroad operations ended in 1918. The Red River Lumber Co. at Westwood, California, bought the Silver Peak McKeen car. Red River Lumber presumably transported loggers to remote locations on the car, but without much success. Apparently the car was soon retired. Its only known images on the Red River are out-of-service photographs. After sitting unused for many years at Westwood the car was cut up in the early 1940s when wartime scrap prices were high.

Meister produced the largest number of motor cars built for Nevada short lines: six cars that operated on the narrow-gauge Nevada Central, Eureka-Nevada, and Nevada-California-Oregon railroads. Meister had one of its factories in Sacramento and, from 1870 through 1923, built horse streetcars and gasoline motor-cars. In 1921 Meister built one electric street car, for the Municipal Railway of San Francisco.

The 93-mile-long Nevada Central connected mines at Austin with the Central Pacific Railroad at Battle Mountain. Freight and passenger operations beganin 1880. Thrice-weekly motor-car service was introduced July 1, 1909, increasing later to five and even six days a week. Trucks and buses of Nevada Central Motor Lines replaced the motor cars after the railroad was abandoned on February 1, 1938.

In September 1905 the Reese River Reveille reported a Battle Mountain – Austin trip of the first railway motor-car in Nevada: the Nevada Central’s 17-horsepower Oldsmobile Wagonette No. 101. The passenger-baggage car had capacity for eight to ten people. It was handling passenger and sacked-mail service regularly in 1908-09 when NC steam trains were reduced to three round trips a week.

Nelson E. Bartoo built three distinctive motor cars in his dual capacities of NC Master Mechanic and proprietor of the Bartoo Machine Shop: NC No. 103, rebuilt NC No. 102, and Nevada Short Line’s “The Jitney.” Historian Greg Maxwell likes to call Bartoo’s cars, with their distinctive prow-fronts, the “Battle Mountain McKeen cars.”
Through his Battle Mountain business, Bartoo served as an agent for Fairbanks-Morse; and NC car No. 102 resembled an F-M/Sheffield Model 19 motor car in narrow gauge. It made the 93-mile Battle Mountain – Austin trip in 3½ hours.

NC’s Battle Mountain shops built 4-wheel, chain-drive Car No. 103 in 1914. Its suspension and other parts resembled components found in Faibanks-Morse catalogs of the day. The passenger, baggage, and sacked-mail car had a maroon exterior and dark-green interior. Nicknamed “Bull of the Woods” for its hard starting, No. 103 remained in service through the end of operations.

Car No. 104 was built in 1917 by the Vulcan Iron Works of Denver, Colorado, as Argentine & Gray’s Peak Railroad No. 9. Purchased secondhand in 1920, the car emerged from rebuilding in the NC shops with a motorman and passenger smoking compartment, 16-seat passenger section, and baggage compartment. With its 6-cylinder, 100-horsepower Wisconsin gas engine, No. 104 was the largest and heaviest NC motor car. It had a maroon exterior and light-green interior. Soon supplanted by newer cars from the A. Meister Sons Co., the car was retired in 1934 and stored at Battle Mountain.

NC also owned a 4-cylinder 1928 Ford Model-AA 1½-ton truck that was never intended for rail service. After the wreck of No. 102, the NC shops rebuilt the truck in mid-1929 for rail passenger, baggage, and sacked-mail service as No. 107, NC’s last motor car. It and No. 103 remained in service until NC’s abandonment. Most of the railroad’s assets were sold to the Hyman-Michaels Co. for scrap.

Using Nevada-California-Oregon Railway’s Reno shops, the Bartoo Machine Shop built Bartoo’s third prow-front gasoline motor-car, for the Nevada Short Line Railway. The 12-mile NSL was one of Nevada’s shortestand shortest-lived – railways. Built in 1913 to serve the Rochester Mining District in Pershing County, it was the last independent short line built in the State. Floods, lack of equipment, inadequate freight, and insufficient funds doomed the railway. It was scrapped in 1920.

The 20-passenger, 60-horsepower car may have been powered by a Winton automobile engine. The car made its test run on the N-C-O between Reno and Doyle, and first ran on the NSL on January 22, 1915. The car, called “The Jitney,” apparently never had a roster number. “The Jitney” was wrecked in a rollover accident on March 22, 1915, repaired, and returned to service. Three years later a report by the NSL receiver lists the car as junk. Its fate is unknown, but there are postcard images of a shed at Oreana that may be the de-trucked body of “The Jitney.”

In May 1912, the Eureka-Nevada became the corporate successor of the Eureka & Palisade Railroad. Beginning in 1873, the E&P had built a 90-mile line south from Palisade on the Central Pacific to smelters and mines at Eureka. Like the majority of Nevada short lines, E-N turned to motor cars for economy during its last 25 years of service. The E-N operated up to three passenger motor cars before its abandonment on September 21, 1938. Most remaining equipment was scrapped.

The railway’s first motor car was built circa 1907-09 by the Stover Motor Car Co. In March 1913 the E-N acquired it secondhand from the Diamond & Caldor Railway in California for $427. Still bearing D&C No. 5, the car made its first trip from Palisade to Eureka on April 13. Its ten horsepower proved insufficient for regular service over Garden Pass to Eureka: it took the diminutive car 7½ hours to make the 84-mile trip!

The car entered passenger-and-mail service on the relatively flat run between Palisade and Blackburn jumping-off point for the Buckhorn mining district. Gold mining at Buckhorn ceased in 1916 and likely ended the E-N career of the Stover car, which at some point went to the Lake Tahoe Railway & Transportation Company. Southern Pacific acquiredthe Lake Tahoe Railway in 1926 and converted it to standard gauge. A decade later, the Tahoe Daily Messenger reported the car as derelict at Truckee.

E-N No. 21 was an approximately 30-foot motor car assembled by the A. Meister Sons Co. It consisted of a $1,750 Meister carbody mounted on an Itala automobile frame. The Italian auto’s 40-horsepower engine, transmission and differential were retained. The Main Street Iron Works of San Francisco fabricated the car’s power truck. Car No. 21 made its maiden voyage on the Eureka-Nevada on October 6, 1918. In 1921 the E-N added a baggage section at the rear. The car was out of service by 1930.

Fifteen-foot No. 22 entered service in June 1927. It was a Northwestern Motor Co. Casey Jones Model No. 555D with a 4-cylinder Ford engine. Later rebuilt by the Eureka-Nevada, Car No. 22 was scrapped in 1938.

Car No. 23 was acquired secondhand in 1931 from the neighboring Nevada Central. E-N traded side-dump gondola cars Nos. 301 and 302 for NC motor car No. 105. The Eureka-Nevada rebuilt the car without an engine compartment and with 4-wheel trucks. It remained in service until the Eureka-Nevada was abandoned, whereupon it was scrapped.

The N-C-O was incorporated in 1888. On January 1, 1893, it assumed operating responsibility for two narrow-gauge predecessors: the Nevada & Oregon and Nevada & California. When it reached Lakeview, Oregon, in 1912, the main line of the railway extended 236 miles through northeastern California from Reno. Unlike most Nevada short lines, which relied on mineral products for their primary freight, the N-C-O served livestock, lumber and agricultural interests. About thirty miles of the railway were in Nevada.

N-C-O passenger motor-car operations in Nevada were very short-lived. According to ICC valuation records, 11-passenger N-C-O No. 15, the Helen, was purchased secondhand in August 1916. No. 16, the Martha, was purchased secondhand in February 1917. A stretch, open-touring-car design gave it a capacity of nineteen passengers. Both cars were equipped with 6-cylinder engines.

A pair of A. Meister Sons Company 22-passenger motor cars – Nos. 101 and 102 – made trial trips on the remainder of the N-C-O in May 1921 but were deemed unsatisfactory and returned to the builder. The cars had four-cylinder, rear-mounted White engines. Meister later sold one of them, most likely No. 102, to the Hetch Hetchy Railroad.

Southern Pacific acquired control of what remained of the N-C-O in October 1926 and standard-gauged the line between July 1927 and May 1928. The narrow-gauge equipment was scrapped or sold. Standard-gauge passenger service on the line lasted until 1937.