One of Nevada’s greatest attractions to visitors goes mostly unmentioned, even by our most enthusiastic promoters: Time Travel. 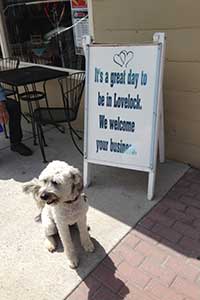 This is conveniently accessible and easy to do here, and one enjoyable way to do it is to make an excursion 20 miles southwest from Lovelock. Ideally you’ll arrive in town the night before, have an early breakfast at the Cow Poke Cafe or the C-Punch and set out to be the first visitors of the day at Lovelock Cave.

Lovelock Cave is a big crack in the West Humboldt Mountains overlooking the Humboldt Sink, now a balding patch of scrub, a remnant of the Lahontan Sea of 10,000 years ago.

It had been a habitation for human beings for many thousands of years. This was a well-known landmark to the wagon train pioneers of the 1850s and ’60s: this is where the Humboldt River, a slow, shallow, brackish trickle by this point, disappeared altogether into the broad expanse of mud. 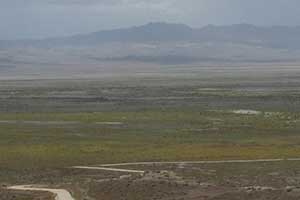 We’re going back earlier than that, to the time of Christ, when the cave was central to the lives of the humans who lived in willow huts and derived their sustenance from the broad lake and lush marshlands stretching out below. 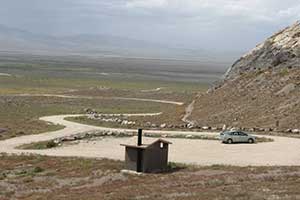 The BLM has made a parking lot, equipped it with toilets and information kiosks, and built a Nature Trail to the cave. When you start up the trail, your journey of 2,000 years is complete. The trail is narrow, steep and winding and even though it is cooler 2,000 years ago than it was now, we are soon sweating. We are naked and barefoot, carrying woven burden baskets with some of our valuables inside. 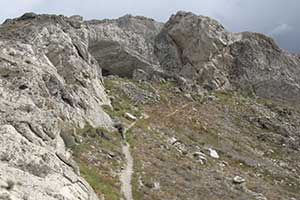 We’re going up into the mountains to scout the pine nuts, see how they are shaping up for the harvest in the fall, and of course we’re taking the time to collect seeds and fibers as we go along. We may be away for several weeks, which is why we’re bringing the duck decoys and our fishing tackle to put away in the Cave, where we can bury them out of harm’s way until we come back. This cave is the communal vault for the People.

We’re not concerned about theft; we are the People, we don’t steal from each other. It’s damage from rodents or weather that worries us if we leave these things in our huts by the lake. 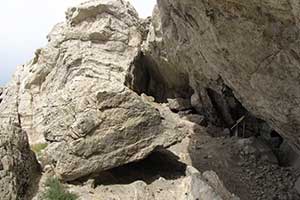 Cat-tail Eaters is what others call us. Our cousins the goom-eaters call us that, and the trout-eaters, the cui-ui eaters, everybody. Because we are rich! We eat cat-tails, of course we do because they are plentiful and easy to get if you don’t mind getting wet.

But we eat fish too, and frogs! And we hunt rabbits, all kinds of small game. We collect every kind of seed! We don’t lack for anything.

What we don’t have, we can trade for.

How could life be better than this? 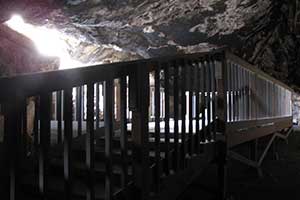 From up here you can look down at the lake and the scatters of huts around its marshy edges. Everybody is back from Pyramid Lake now. We go there after winter is gone to fish with our cousins the Kuyuidokado. And see, over there are some boys and young men on rafts they’ve made out of tule reeds, trying to net fish. They’ll eat some and dry the rest for winter — if they catch any. It takes patience and skill.

Now look across the lake from them, over where the Humboldt River flows in. There’s a much bigger group is another band hunting birds. See the bird hunters? There are men on each side of the river there, and they’ve stretched two long nets across its mouth, secured them in place, and then let them go slack.

At sundown the headmen had placed a line of boys, girls and women along the shore of the lake away from the river in both directions. Everyone stayed quiet and slept there in place last night so as not to frighten the birds by moving around in the early morning.

In the first light of dawn the birds began moving out onto the water and as they did so, the young men also put into the water with the tule rafts they’d made for the purpose yesterday. They moved slowly out into the lake from far out of sight of the river’s mouth and assembled themselves into a shallow arc.

As the sky grew lighter they began paddling slowly toward the shore, shooing the birds ahead of them toward the river’s mouth. As the birds edged away from them and went back onshore again, the people hiding there caught them and broke their legs — they can run faster than they can fly, you know. 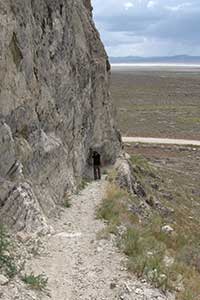 You can see the rafts are still slowly herding the increasingly agitated birds back on shore and up into the river. Now the men with the nets have some hard work! They have to snag them and snarl them, by the dozens — by the hundreds — and then pull them out of the water. Some of the women and kids have come in from their places around the shore. They swarmed over the first net, killing the birds, while the second net is filling up. By the time the rafts have converged at the river’s mouth, their noses touching, the second net will be pulled out onto the shore, and there will be a small mountain of dead birds to be gutted, fried in grease and consumed in a 3-day feast or set aside to be air-dried for the winter. 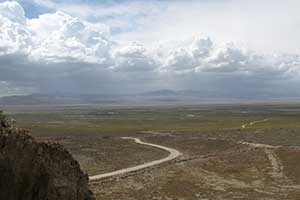 All at once I think we can put off our trip until after the birdfeast. There’s nothing that says we have to leave in the morning, we can stay and join in the fun if we want to. We don’t have to be in a hurry!

And now we go easily down the steep trail along the sheer cliff face, descending around the shoulder of the mountain to the parking lot where we resume our clothing. We drive off in the Prius toward the freeway, the deadlines, the credit cards, the statute books and the mortgages.

What They’re Saying About Us — 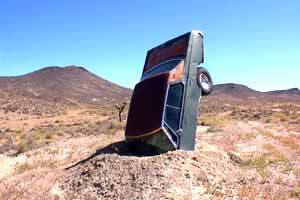 The Wall Street Journal wrote about Tonopah, and found the edgy Car Forest down in Goldfield but not the cutting edge 10,000-mirror solar array just out of town to the north.

Brief Notes from Beyond the Mountains —
Nevada is bustling with events in August this year! Goldfield Days Celebration will begin begins as an August opener, the celebration and land auction is on Aug 1st and 2nd . . . The Neon Museum in Las Vegas is running a campaign to Repaint the Desert Rose Sign. The sign is a Las Vegas Icon that is beginning to decay after years without maintenance. The Neon Museum is asking the public to help give it a fresh paint job . . .

Ringo Starr’s “Official Las Vegas Day” Dedication is on August 8th on Fremont St. in Downtown Las Vegas, show times are from 10am to 6pm. A Celebration “Beatles” Concert starts at 8pm . . .

Don’t miss the Lincoln County Fair on August 6th through the 8th . . . Las Vegas Boulevard will play host to the Desert Hops Nevada & International Beer Festival on August 22, 2015 at 9pm. A good place to fly is at Bootleg Canyon, come ride in the Bootleg Beatdown on August 8, 2015. The Annual River Regatta “Regatta Round-up” launches at the Nevada-Arizona Border in Laughlin on Aug 07, the event runs through August 09. Participants will float thier boats 9 miles down the Colorado River in the longest and largest tube float in the West!

In Beatty the American Off-Road Racing Series starts on August 13th and lasts through . . . On Aug 22nd check out the Silverstate Trail Blazers a National

Hare and Hound event in Panaca . . . On the East side of the state in Ely is the Plein Air Outdoor Arts Festival on August 29th through the 31st. Mesquite’s Fine Art Invitational Exhibition will begin on August 31 and will last through Sep 26 for detail goto the Mesquite Fine Arts Gallery website . . . Wendover will hold the BBQ Bites & Competition on Saturday, August 29 . . . In central Nevada, Kingston Days is on August 2nd in Kingston Nevada.

The Churchill County Fair and Ranch Rodeo starts on August 1st and runs through August 3rd. The Eureka County Fair sounds off on August 6th and lasts through the 9th . . . Carlin hosts a Sho” & Shine on August 16th & 17th and the Battle Mountain Burners Annual Show and Shine is on August 22nd . . . Not to missed is the Fallon Fights Rural Rumble on August 23rd . . . In the far north of the state is the annual Jarbidge Days Festival on Aug 8-10 and in Jackpot Nevada there are a variety of music and comedy events throughout the month of August, click here for details

In western Nevada, ‘Step Back In Time’ with a ride on the historic Virginia Truckee Railroad. Dine under a Blue Moon on August 01, 2015, 07:30pm – 10:00pm on the V&T, Check the V&T schedule regularly for their themed train rides! . . . The “Tour de Nez” in Carson Valley is on August 1st & 2nd . . . Go to the Silver Dollar Car Classic in Mills Park in Carson City on August 2nd. August 7th, don’t miss the Bliss Garden Party at Bliss Mansion in Carson City . . .
The Jazz and Beyond Music Festival in Carson City is on Aug 7th and runs through the 23rd. The first annual Wild Horse Faire kicks off in Virginia City on August 22. See a plethora of muscle and machine test its mettle at the Virginia City Hillclimb on the route from Silver City to Virginia City Highway 341 on August 29th and 30th. Sky high in Carson Valley is the Aviation Roundup on Aug 22nd & 23rd. . .

Lake Tahoe is truly a living playground in the summer. Summerfest, a magical musical experience is scheduled through August 16 at Sierra Nevada College, Incline Village. The always entertaining, Lake Tahoe Shakespeare Festival at Sand Harbor runs through August 23rd. The Hot Tahoe Cruisin’ South Shore Car Show is at the Heavenly Village on August 1st through the 8th. At the Thunderbird Winemaker’s Dinner, Campo Restaurant Chef/Owner, Mark Estee, will prepare a delectable dinner to pair with Arietta Wines. The Annual Meyers Mountain Bike Festival August 8th and 9th. The ‘Great Gatsby’ Living History Festival at the Tallac Historic Site is on August 8th & 9th. The Ta-Hoe Nalu Paddle Festival is at Kings Beach State Park on August 14 through August 16.

XTERRA Lake Tahoe, a Swimming, Biking and Running Triathalon starts at Village Green on August 15. A dazzling array of craftsmanship will delight at the Concours d’Elegance Wooden Boat Show on August 7-8 at Homewood. Lake Tahoe Music Festival kicks off on August 18 ad holds through the 21st. Run the Sierra Crest 50k Ultra on August 8th, a trek over the Sierra crest will take you from Truckee to Donner Summit.

Reno Tahoe Greek Festival will feed you with authentic Greek fare on August 21st through 23rd. . .

Hot August nights will be well under way in Reno on August 4th through the 9th, check the Hot August Nights event schedule for further details(click here). On August 10th,

Twist the Night Away At the Hot August Nights Sock Hop at Circus Circus. The Reno Tahoe Music Festival runs on August 21-22 at Robert Z. Hawkins Amphitheater in Bartley Ranch. And last but not least, the always impressive Burning Man Festival begins on August

30 and runs through September 7 in Black Rock City near Gerlach Nevada. Can we be sure it’s a Burning Man and not a Flaming Gazebo? We’re not entirely sure. 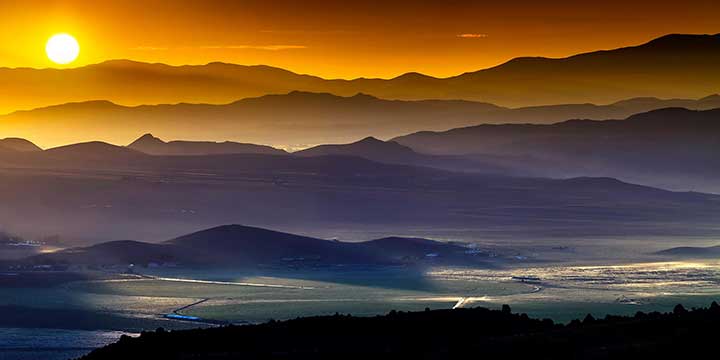 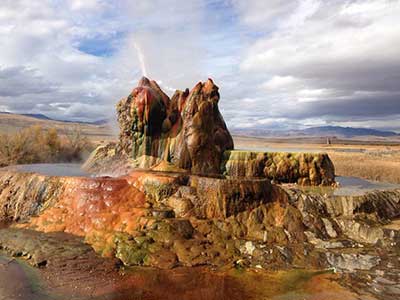 NevadaGram #182 – Visits to Eureka, Tonopah and Winnemucca, Richard Bangs Makes it to Reno