We are doing ourselves a big favor by visiting Boulder City in February. It is the perfect cure for a Comstock winter, if you’re not going to Belize. When we are snowed in and battling the gale to get to the woodpile and back, they wear t-shirts and drink wine at sidewalk cafes.

I admit, that’s part of the reason Boulder City was chosen as City of the Year, but we’re lucky enough to be visiting during one of the little city’s biggest events of the year, the Dam Short Film Festival.

Since 2008 the Festival has been held in the 1931 Boulder Theatre. The Festival plays short films with any content and in any style so long as they are 40 minutes or less in length; more than 100 short films are shown over the course of five days. Here are the 2014 winners. 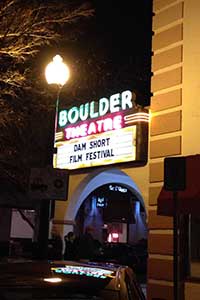 We took in a retrospective showing of comedies and were delighted. It wasn’t that we rolled in the aisles laughing the whole time, although we had moments.

Some of what we watched seemed more funny-strange than funny ha-ha, but it was all brief enough that it didn’t pall. One of them starred Ed Helms, currently highly visible on television, as a Zombie-American sensitive to widespread prejudice.

It seems to me adding these films to the commercial movie screens would be a draw — “Come see the latest Big Movie, and get a random fun small one too.” 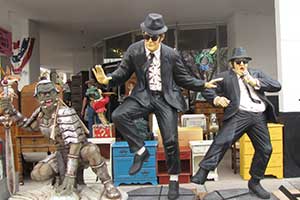 The Festival is a magnet that attracts half a zillion film makers and their pals to town, and they were engaged in lively conversations of all kinds at the tables outside Milo’s, The Dillinger — where Shorty was introduced to a Schnauseranian(!), half Schnauser, half Pomeranian — and the other sidewalk cafes downtown. In addition to food and drink there is also shopping, heavy on the art and antiques and with a big serving of kitsch on the side.

But there’s more for visitors to Boulder City than the downtown.

Drive west to Buchanan Street (where US 93 turns north up the hill), and drive south to the Boulder City Veterans’ Cemetery, an attraction in its own right, or beyond it past the golf course to the airport and Skydive Las Vegas, a long-established purveyor of thrills.

Return to the highway, drive further west to Yucca Street and turn north. Immediately ahead you’ll see the southern branch of the State Railroad Museum, which is part exhibits of railroad locomotives and rolling stock and part operating railroad.

The Nevada Southern Railway runs four trains a day on weekends, except in January when they shut down for maintenance.

Trains depart at 10 and 11:30 am, and 1 and 2:30 pm, plus special trains during holiday seasons. The run proceeds west approximately three miles to just behind the Railroad Pass Casino using the right of way and track developed by the Union Pacific Railroad in 1931 to supply materials for use in the building Hoover Dam. The round trip takes about 45 minutes.

The exhibits are quite accessible, there’s a small but very nice Gift Shop, and you’re free to wander as you please with a leashed and mannerly dog, so long as you pick up after him.

Further north up Yucca Street, take a right turn on Industrial and watch for Flightlinez, the company that operates the Bootleg Canyon zipline. It was the inspiration of Brett Thompson, who began developing a series of hiking trails here as a form of therapy when his doctor recommended exercise. So productive were his efforts that the City hired him to keep it up.

That eventually led to his making connection with Greenheart, a Canadian company that works in parks and protected areas to create a global network of conservation-based ‘aerial trails’, and to this project. It adds a new, safely adventuresome dimension to Bootleg Canyon with minimum infringement on the existing landscape, including the existing trails.

Nowadays Flightlinez launches as many as 300 customers a day out into the air to glide swiftly down to the next of four platforms extending one after another about a mile and a half down the canyon. It is so successful that over the past 3 years it contributed $300,000 to local charities.

We also made our first visit to the new bridge over Black Canyon that bypasses the Dam, and I nearly choked to death.

There’s a pleasant wheelchair-friendly dawdley stroll up from the parking lot to the spot where the bridge soars out over the river, carrying fast-moving automobile traffic and a very very narrow walkway with a very very low railing along the north side of it on which people walk (or roll, if they’re in wheelchairs or strollers) out over the river to the Dam Overlook.

If you look down right there, while you’re still standing on solid ground, you can see the river far, far below.

That’s what I did, and it prompted my testicles to climb up inside my body and wrap themselves around my larynx so tight I nearly strangled to death.

So I can’t tell you from personal experience what the view is like from out there, but I can see from the photos that it’s great. We tottered back down to the parking lot, where we’d left Shorty in the car — also against the rules — and returned to town to continue our explorations.

The restaurant in the Boulder Dam Hotel has re-opened to good reviews, and there are a half-dozen other excellent dining choices downtown and along the western approach to the little city.

If you have only a little time in town: the Bistro Cafe. If you haven’t dined here, you must; if you have, you’re free to roam among the other excellent choices: Mel’s Diner for instance, and the Coffee Cup Cafe, both downtown, and the Southwest Diner on the west edge of it. If you stayed at the Boulder Inn & Suites across the street, you come over here with your slip of paper and they will fix you a nice breakfast. I know there are good dining choices in Boulder City that we haven’t found yet, so if you can recommend one that we missed, please use the Comment form below to nominate it for the 2015 Must-See Must-Do List.