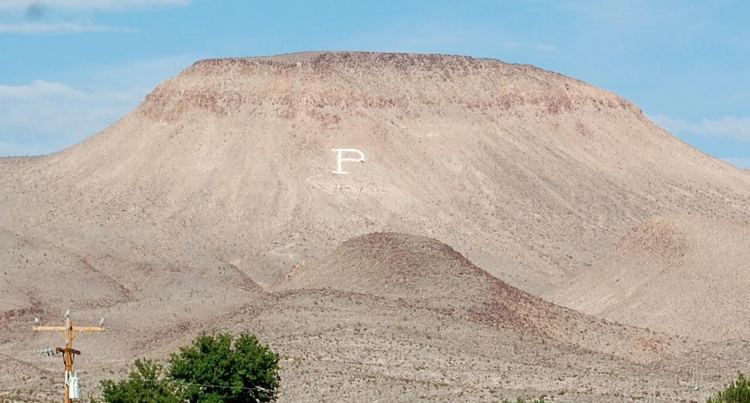 Does your town or community have a letter of the alphabet high on a mountain side to mark its location? Some do, and so does Alamo in the Pahranagat Valley.  At 100 feet tall and 50 feet wide, it is over twice as tall as the famous Hollywood sign in Los Angeles. It’s been there a lot longer than a person might think and was constructed all by hand, even using horses.

In the 1962 movie musical, The Music Man, Professor Harold Hill sang a song about how “P stands for pool,” but here in the town of Alamo it stands for “Pahranagat” . Go figure

But there is a reason; allow us to explain. Putting a marking or a symbol up high for all to see, to signify the location of a town or city, is not just a 20th century invention, the practice dates back to ancient times.

All of the people living here in those earliest days certainly saw the bare spot on the mountain, but thought nothing more about it. So the P on the mountain missed a lot of things.  Imagine what the mountain would look like if the “P” were not there even now.

Yet, for most everyone living in the Pahranagat Valley today, the P has “always” been there, and most have never known a time without the large letter to see and take pride in.

In 1931, the schools in the valley finally unified into one district, and in 1937 a new high school building opened in Alamo, providing a full four-year program, in addition to affording more room than the older three-room school, just a stone’s throw to the north.

Other towns in southern Nevada have had, if not now also, alphabet letters to mark the location of their towns; Panaca, Lund, Ely, Moapa, Mesquite, Smith Valley and maybe others.

Back in 1937, with a new sense of pride from the new school building, it seemed like a good time to put a letter someplace on a mountain around Alamo.

Just who first came up with the idea, if indeed there was just any one person, may not be known, and it’s not even necessary. One local woman said, “Table Mountain is a special mountain, just made to fit.” So it seemed as good a place as any, and probably better than anywhere else.

The late Edwin Higbee, a life-long valley resident, said the decision to undertake the project was the work of the boys in the Ag class of PVHS teacher George Willardson. The late LaMoine Davis recalled that band teacher Horace Reed was the one who got the idea rolling. Whatever way it was, both said that Ag class member Elmer Davis was in charge of the project, with help from classmates Bill Lamb, Roy Nesbitt, Kay Wright,  Higbee himself, Bruce Bunker, Keith Cutler, Charlie Hewitt, Max Erkenbreck, Dave Schofield, and maybe some others Edwin couldn’t  remember.

Sometime in the spring of 1938, Davis, along with some of the boys and maybe Mr. Willardson and Mr. Reed, too, went up the steep grade on the mountain to pick a place where they wanted the letter to be. They selected a spot just above a ledge of rock outcropping nearly in the center of the mountain’s western face.

“First time we went up,” Edwin said, “we took horses, water and lime. Packed it all on horses and put water in 5-gallon gas cans. There used to be a lot of old 5-gallon cans around.”

The boys took the horses up as far as they could, then hiked up the rest of the way to the spot chosen. There was no path to follow, no living things except maybe birds, snakes and such, had ever been up there. They gathered up the largest rocks they could find on site, and there were lots of them, and placed them in the shape of the letter. “We didn’t have much,” said  Edwin, “just a kind of an outline.” An outline of a letter 100 feet high and 50 feet wide.

LaMoine Davis, Elmer’s younger brother, said he remembered watching the guys up on the mountain that first time. He said he could walk out of the old school — still functioning as the grade school then – and go to the northeast corner (probably close to where the Alamo Medical clinic is today), and watch what was happening. He said there were people at the lower levels who had flags and by moving the flags in the right directions, like in the signal corps, could let those working with the rocks know how to set the lines properly, and he said, “They got it pretty straight, too, didn’t they?”So there it was, a big white block P just above that rock ledge outcropping, easily seen from most any spot in town.

Over the next year, it was somehow decided that the letter needed to be changed a little, so in 1939 some of the boys again went up on the mountain and added the base and the little tail to the top of the letter, making it look as it does today. This time other people of the community wanted to help also. Elmer Davis took his Dad’s old Chevy truck and drove that up the canyon. 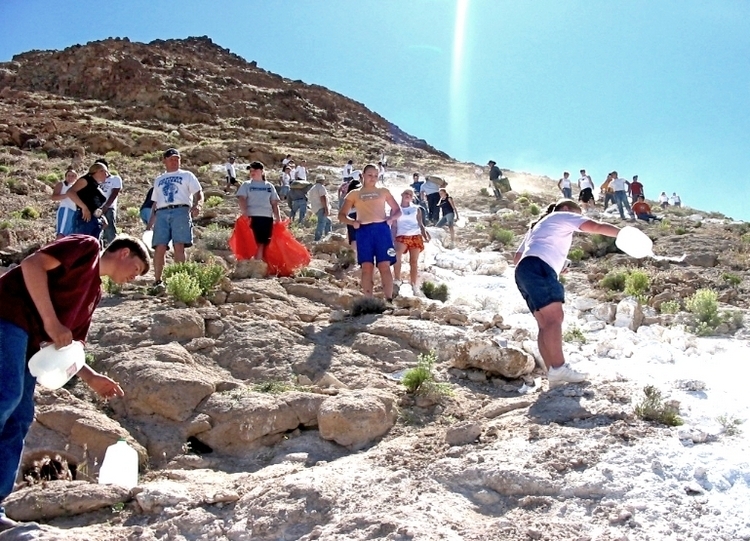 For many years afterward it was an annual task of the high school students in the spring, usually in May, to make the trek up the mountain and put a new coat of mixed water and lime on the letter. For awhile it remained necessary to ride horses up most of the way, but as pickups got better, the students would drive those as far as they could and walk the rest of the way. Today, with 4-wheel-drive vehicles, a person can go almost to right under the rock ledge. Yet, there is something that hasn’t changed over the many years: it is still necessary to carry water and lime up to the letter by hand. The lime still comes in bags, but the water is carried now in 1-gallon plastic jugs. Everyone has to bring one.

LaMoine Davis used to tell that in his own time in high school, plus probably for some years before and after, “It was a highly anticipated event. “And quite an ordeal, too. But when the work at the P was done for the day,  kids usually skipped the rest of the day of school and went swimming at Big Ash,” which was then a popular and well maintained recreation spot.

Why was the letter P used when the name of the town is Alamo? Some of Alamo’s old timers say that when the schools all became one district in 1931, “There was a little bit of tension between the Alamo schools and others in the Pahranagat Valley, so it was decided that a “P” was the letter to use  instead of an “A.”

The “P” spends four lonely years presently, maybe more, before it is visited again by the high school students. Since 1977, the school stopped going up every year and changed to going just once every four years, rather  than not go at all. Former PVHS Principal Steve Hansen said doing it once every four years gives everyone who attends PVHS a chance to go up and experience this unique event if they want to. It’s something not done by schools in many other towns around the country.

Very few people actually get to up to the “P” because it is quite steep up there, but there it is and has been there for a long time, for everyone to enjoy. And it figures to be there for a long, long time to come.