It’s not often one gets to eat the food of Brittany, France, but you can do that at The Real Crepe, where owners Jean-Jacques and Catherine are making some very good crepes.

Other French specialties are Croque-Monsieur Salmon (grilled smoke salmon and cheese sandwich), Quiche, and Jean-Jacques’ famous Galette, a flat round crusty cake. A Breton galette is a pancake made with buckwheat flour usually with a savory filling. Others are filled with Swiss cheese, mushrooms, onions, potatoes, or leeks and tomatoes.

He didn’t know such a day existed 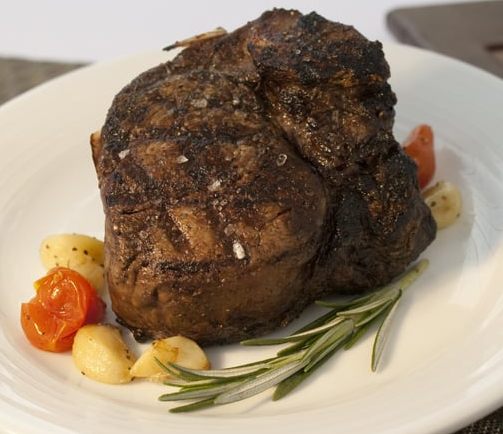 until he was invited by former Las Vegas Mayor and mob attorney Oscar Goodman to enjoy a perfectly-aged filet cooked over a 600-degree grill at Oscar’s Steakhouse at the Plaza Hotel. The restaurant is inside the iconic dome of the hotel that overlooks the lights of Fremont Street and downtown Las Vegas. For the record, Diamond Jack enjoyed the 12-ounce Joey C’s filet mignon, a signature menu item named after the mayor’s friend, Joey Cusumano. Joey C, in spite of never having any gaming-related problems with the law, is in the legendary Black Book and barred from ever stepping foot in a casino. That’s because of his friendship with Tony Spilotro, a notorious client of Goodman’s who was accused of killing 27 people. Don’t you love Las Vegas?   702-386-7227. www.oscarslv.com.

*Did you hear about the Buddhist who refused Novocain during a root canal? His goal: transcend dental medication.

*In a democracy it’s your vote that counts. In feudalism it’s your count that votes.

*A vulture boards an airplane carrying two dead raccoons. The stewardess looks at him and says, “I’m sorry, sir. Only one carrion allowed per passenger.”

*When cannibals ate a missionary, they got a taste of religion.

Last month, I mentioned the upcoming Grapes & Hops Festival, which will take place on Saturday, September 29th at the Springs Preserve. The tickets are now on sale for this event. The festival includes unlimited wine, craft beer, food samples from Mon Ami Gabi, Top of the World and TAO, among others, and music for those aged 21 and over. Proceeds from each ticket and the raffle and silent auction benefit Par for The Cure, a non-profit which raises funds for breast cancer research. General admission tickets are $45 in advance or $55 on September 29th. You can also purchase 2 tickets for $80 or $115 for VIP which includes a separate bar area with specialty foods. Hours are 5 p.m. until 9 p.m. For DD’s (designated drivers) the cost is $30. DD’s will not receive a sampling glass; however, can enjoy the food and entertainment.

Saturday, September 8th, the Springs Preserve will hold the 1Farm Local Food Farm Festival from 10 a.m. until 7 p.m. This is a family event which showcases locally produced food from growers, farmers and sustainability-minded vendors.

Chefs will be bringing the best of their products, menus and more to the event, which will include food trucks, live entertainment, a beer and wine garden, a kids zone, workshops on farming and gardening, and live animals. They will also have a traditional farmers market for you to purchase products. Children aged 5 and under are free. General admission is $10 for adults and $5 for children (6-12 yrs.).

Once again, the Springs Preserve will be holding a Plant Sale, this time for Autumn, on Saturday, September 15th, from 8 a.m. until 1 p.m. in the South Parking Lot. There is no charge for admission to the plant sale; however, if you want to enter the museums and galleries there is a charge for those areas.

If you are wondering how many plants could they possibly have to sell in the desert, you would be amazed! They will have over 200 different varieties of cactus, succulents, shrubs, perennials, vines, ground cover, and trees for sale. I have included the last published list of the items for sale.

You are guaranteed to walk away with a purchase, whether it be a plant or item from a local vendor; so, if you have a cart, 2-wheeler or some other item that can be wheeled, you should bring it along from home. They do have carts available on site; however, they are usually grabbed by the Springs Preserve Members that are allowed into the sale at 7 a.m. 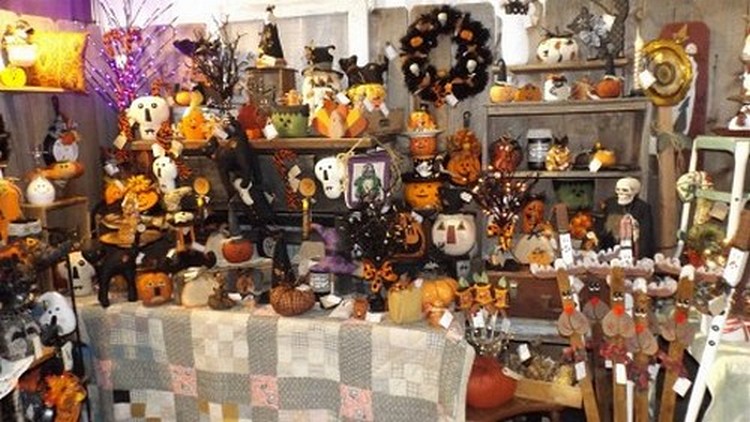 Just when you thought I was going to mention another event at the Springs Preserve, along comes the Harvest Festival arts and craft show. This event was always held at Cashman Field Event Center. With that venue now closed, the event running September 7th through 9th is at the World Market Center in Pavillion 2. The World Market Center is at Grand Central Parkway and Bonneville and will be open at 10 a.m. Friday, Saturday and Sunday, closing at 5 p.m. Friday and Sunday and 6 p.m. on Saturday.

There are $2.00 discount coupons available off of adult, senior & military tickets in the Las Vegas Review Journal and can usually be found at Rebel gas stations, IHOP and Port of Subs. Safe Nest is also offering a $2 discount if you donate canned food, paper products or diapers. General admission is $9 for those 18 and over, $7 for seniors (62 and over) and military. Children aged 12 and under are free. The nice thing about this festival is the price you pay is actually good for all 3 days. The hard part is keeping the “hand stamp” you must obtain before leaving the building, dry and relatively readable, all 3 days! The parking at the Pavillion is $5.

The Harvest Festival is usually the first of the season offering arts, crafts, preserves-hence the preserves title of this article, entertainment, food, drawings and handmade one-of-a-kind items.

To preserve your youth and boost your energy, the 3rd annual Vegas VegFest is being held on September 29th at the Clark County Amphitheater. Parking is free. They are requesting a $3 donation for entry at this outside event, which will have plenty of food, a beer garden, speakers, clothing, and jewelry items for sale, and a raffle of a $1,000 World’s Greatest Vegan Raffle Basket. Raffle tickets will be sold for $5 each or 5 for $20. And they might be selling preserves, which in case you are wondering, are mostly vegan-friendly. 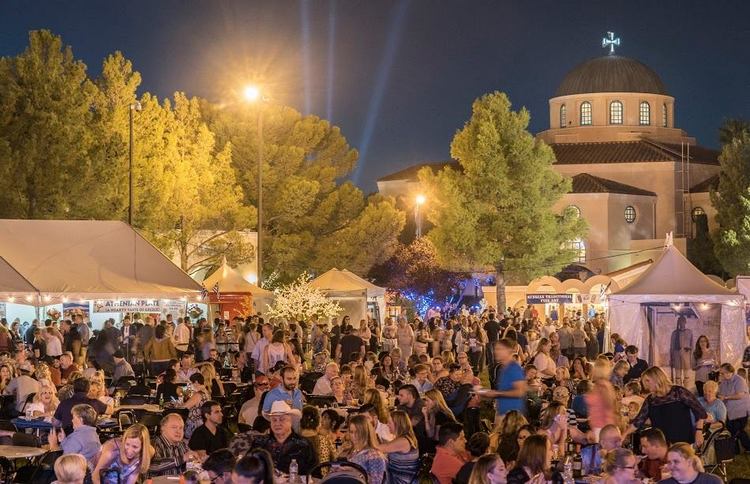 A 26.2-mile Torch Relay Run is held in conjunction with the Greek Food Festival to raise money for charity. This year’s effort will support The Leukemia and Lymphoma Society of Southern Nevada in memory of 12-year-old Michael Manteris diagnosed with a rare form of Leukemia, AML. The money is raised by people who want to run a one-mile leg obtaining pledges and people directly donating.

The run will begin with a torch lighting ceremony at 2 p.m. Friday, Sept. 14, at Tivoli Village in Summerlin. The torch will then be carried along the selected route with a police escort and two limousines following to collect runners after they finish. The torch will arrive at the festival grounds at approximately 7 p.m., when the festival flame will be lit.

Shiraz Opens on West Side

Shiraz, owned by longtime restaurateur Raja Majid and named after the ancient Iranian city, has opened at 2575 Decatur. near the corner of Decatur and Sahara. featuring authentic Persian, Indian and Pakistani halal cuisine. The menu offers an innovative take on Mediterranean food, a variety of vegetarian options, and dishes cooked by traditional methods, including tandoori specialties and Indian breads made in a clay oven known as a tandoor.

Le Cordon Bleu Las Vegas grad Chef Jainine Jaffer oversees the kitchen, while Jozef Letasi, who has more than 10 years of bartending at various locations on and off the Strip, handles the beverage scene. Shiraz has partnered with Ace of Steaks to provide kosher catering for private events.

HeadzUP Is Open at Boulevard Mall 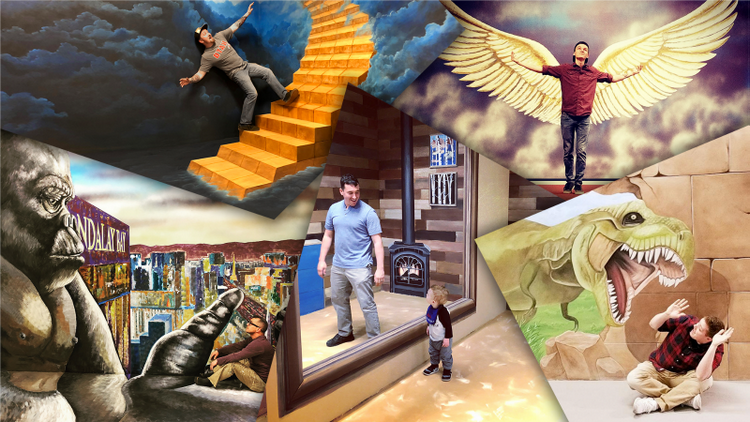 HeadzUP, which took over space at the Boulevard Mall formerly occupied by a major department store, is open with more than 40,000 square feet making up an amusement center environment. The massive area features the first 3D Trick Art Museum in the United States with more than 40 fun Trick-Art interactive original paintings making ideal optical illusions for taking selfies or portraits. Admission is $10 and $20 general admission for 12 years and older.

Inside HeadzUP there are several themed activity arenas. In the “Coat of Arms Archery Tag,” players can put on armor and hone their knight skills in the forest, shooting and dodging foam-tipped arrows with friends. Archery Tag is $25.

Especially intriguing are six interactive themed escape rooms adjoining the museum. Participants have 60 minutes to solve the mystery to get out of a themed room wearing costumes and role-playing. There are themes like “The smoking gun” Wild West Room, and the “High Roller” Casino Room. Cost is $30.

Pinball Hall of Fame to Move to New Location

A move is being planned for the popular Pinball Hall of Fame, located at 1610 E. Tropicana Ave. since 2009. Addicted operator Tim Arnold, now 62 years old, used to install pinball machines at bars and restaurants, which morphed into his 8,600-square-foot building jammed with 250 pinball machines and other games. With an additional 800 machines in storage, his purchase of a 1.76-acre parcel of land in the tourist corridor on the south end of the Strip on the east side will provide for him to build a larger building to house his fun possessions.