An amazing turnaround: Comstock Mining Inc’s share price had tanked at the NYSE, down, down, down from $1.11 on January 16 to 38¢ on June 28. And then on July 29 it spurted suddenly back up again to 60¢, which is where it stood at closing on Friday July 31. Get the current price here. 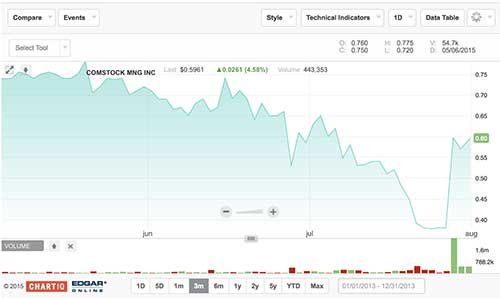 From all appearances, John Winfield recognized his company was sinking and he resorted to the classic maritime remedy: he jettisoned cargo.

As Managing partner of Northern Comstock LLC he conferred with himself as Chairman of the Board of CMI, shook hands with himself and high-5ed himself over a new arrangement he had hammered out:
The original agreement required 36 yearly “capital contributions” of $862K, a total of $31M; the new deal reduces number of these annual “contributions” to 11. That’s a saving of $20M, even though 11 years have to go by before CMI will realize any actual saving.

Also the Preferred stock held by John Winfield and the other corporations he controls were converted to common stock with a one-time dividend as a parting gift.

Giving up the preferred shares and abbreviating the contract with Northern Comstock were significant concessions by John Winfield, desperate to lighten ship and prop up the share price.

It seems to have soothed the qualms of a nervous investor who then purchased a million shares.

Winfield has also advised the Company that he intends to donate his personal dividends to the Comstock Foundation for Culture and History, a bona fide 501 (c) 3 organization which he dominates. He said he will step down from his CMI Board chairmanship to focus more on the Foundation’s work to “enhance the National Historical Landmark”, as if he hasn’t already enhanced it enough.

As good as it looks compared to 35¢, 60¢ is still a far cry from the $2+ numbers of a few years ago, when months of profitless mining could be recouped by a relatively routine stock offering. 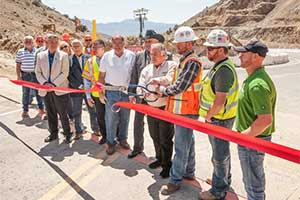 While the stock slide was taking place, CMI was paying to repair the highway slide at the Lucerne Pit. A temporary roadway has opened on schedule with a high-5 celebration by the very people whose job it was to prevent disruption of the highway in the first place. Way to go, guys. 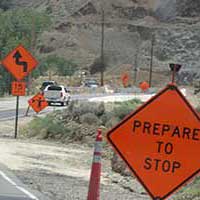 The temporary road features an S-turn to slow vehicles at the crossing built for the ore trucks, with flagmen to stop traffic as needed. Now a permanent roadway is being constructed along the east wall of the canyon, scheduled for completion in December.

Concerning the highway collapse, photos taken at the June Comstock Mining Inc Annual Meeting in Virginia City explain why no-one in the Storey County government hierarchy wants an investigation into what caused it: 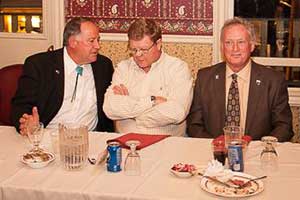 Since his election, Storey County Commissioner McBride, left, has consistently refused to meet with his constituents in Gold Hill to discuss our concerns about the mine and its operation. At first he said he was “studying the situation”; now he simply ignores our invitations to discuss what’s happening in the district he represents. He appears firmly uninterested in discovering the cause of the highway’s collapse.

Congressman Mark Amodie’s role in this farce may have something to do with campaign contributions, not unheard of and not illegal, but not pretty either. Storey County Commissioner Jack McGuffey (right) seemed delighted to have a place at the trough and quite untroubled about what what caused the closing of the highway to Virginia City.

Most recently the Commissioners approved a major expansion of CMI’s Special Use Permit. I am no longer a reliable observer at public meetings because of obfuscatory overload, so let’s put our reliance on CMI’s PR department, which put out this announcement on July 9:

“Comstock Mining Inc. announced today that the Storey County Board of Commissioners has confirmed that the major modifications to the Company’s operating plan conforms to the conditions of the existing Special Use Permit No. 2000-222-A-5 (‘SUP’) and unanimously approved that plan.

“The modification outlines the Company’s plan to develop a portal and underground tunnel (a “drift”) alongside a highly mineralized series of high-grade structures.  The Company then plans to efficiently drill and develop those structures into an expanded resource and, based upon the final economic feasibility analysis, expanded mine plans. . . . The Company plans to invest approximately $3 million for the first phase, including the underground portal, primarily core drilling and certain related infrastructure for the Lucerne underground exploration and development project.”

Another $3 million? Thrilling in its optimism! Let’s see how it plays out.