The Sparks Heritage Museum, dba Sparks Museum and Cultural Center, working with Sparks Councilwoman Julia Ratti, was recently able to save from destruction the iconic figure of Last Chance Joe, a massive 36-foot-high statue based on a cartoonist’s caricature of an old-time gold prospector and originally installed in front of the Sparks Nugget in 1958. In 2014, the new owners of the Sparks Nugget planned to remodel the facade of the Nugget, but Joe didn’t fit their plans, so Joe had to go. 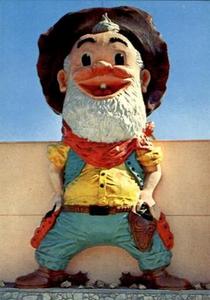 Since the Museum site was not then ready, Joe was removed from the Nugget, placed on his back on a flatbed trailer and put in a parking lot while the design and construction of a suitable site was completed. Joe was eventually moved to his new home in front of one of the Museum buildings near the corner of Pyramid Way and Victorian Avenue. The new location, however, created problems with the figure that had not been anticipated. When originally placed in front of the Nugget in 1958, Joe was facing north and had a wall at his back, so he was fairly well protected from the sun. The new location has him facing south with a wall behind him, subjecting the front of him to full sun all day. Moreover, the figure was never designed to go through the rigors of being moved. As a result, it is displaying many cracks and breaks caused by the move, lying on his back for a couple of months, being re-erected, and the subsequent settling onto his new mounting.
To compound the problems, not all of the pledged money for the move and restoration was received. The Museum finds itself approximately $25,000 short of the amount required to completely pay for the move and the restoration, which is going to cost almost twice as much as originally suggested. There is no money available to provide for Last Chance Joe, and it would be a shame if this historic relic is lost due to a shortage of money to preserve him. A plea is being made for all to make donations of any size to http://nevadafund.org/help-save-the-iconic-last-chance-joe-statue/. Donations can also be made in cash or check to the Sparks Museum & Cultural Center, 814 Victorian Avenue, Sparks, NV 89431. All donations will be acknowledged with a signed letter that may be used for tax purposes.
Dick Dreilling

Last Chance Joe was born in 1952 as a drawing by Boise, Idaho commercial artist and ad man Roscoe “Duke” Reading. The creation of the comical white-bearded, one-toothed gold prospector had been commissioned by Idaho gambler Dick Graves for a combination restaurant and slot machine parlor he owned in nearby Garden City, Idaho the Last Chance Cafe. When slot machines were outlawed in Idaho in 1953, Graves closed down his chain of Idaho gaming “cafes,” pulled up stakes and moved to Nevada and he brought his sidekick Last Chance Joe along with him. In Nevada Graves rapidly opened three new “Nugget” casinos in Yerington, Carson City and Reno all in the spring of 1954 and all prominently featuring Last Chance Joe, in painted sheet metal and multi-colored neon tubes, above their marquees.

The towering statue of Last Chance Joe that stood for 56 years in front of the Sparks Nugget was designed and built by R. H. Grosh Scenic Studios on Sunset Boulevard in Hollywood. Since the early 1930s, Grosh had been making props of all kinds for theatrical companies and the nearby movie studios, as well as for Disneyland, using a highly malleable and moldable plastic-impregnated fabric called Celastic.

The molded Celastic, when dried, formed a durable, thin-but-strong high-impact plastic. Beneath his Celastic outer shell, Joe’s builders used a steel framework over which chicken wire and multiple layers of papier-mache were laid. The statue was built in three sections made to be bolted together to enable it to be shipped to Sparks on a railroad flatcar with the head, including Joe’s hat and full white beard, being easily the tallest section.

R. H. Grosh Scenic Studio’s rendering of Last Chance Joe, maybe not coincidentally, resembled a Disney cartoon character more than any previous depictions of him on Nugget casino signs, matchbooks, coasters, brochures, and all manner of Nugget printed matter ever had. Their statue of Last Chance Joe, also commissioned by Dick Graves, was unique in yet another respect, as well: it displayed none of the earlier Joes’ usual prospector’s accessories a gold-washing pan in one hand and a gold nugget in the other, or a big heap of gleaming gold nuggets laying nearby. Instead, the lofty new statue of Last Chance Joe stood alone with nary a gold nugget in sight and with his hands now, for the first time, resting on the handles of his matched pair of six-guns. It was as though this latest version of Last Chance Joe, now legally divorced from his earlier gold-prospecting incarnations at the Carson and Reno Nuggets (Graves had sold them to others), had switched careers and become a comic gunslinger along the lines of the Warner Brothers’ cartoon character Yosemite Sam.

But then, Dick Graves’ sprawling (for it’s era) new 1958 Nugget on the south side of B Street in Sparks was a very different Nugget from its predecessors, exceeding all his previous Nugget casinos not only in size and splendor but also in the number of clever innovations that had made the Nugget name so outstandingly successful in Nevada. So perhaps it should come as no surprise that it would also have to have had a very different and new Last Chance Joe out front to greet the customers, too. 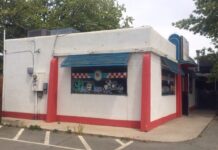