Although November sees fewer humans in and around Baker, it’s the time of year when thousands of sheep return to the valley. Snake Valley, the long valley that contains Baker and several other small communities, has long been an important wintering location for sheep. In the old days, it was a contest to bring sheep from more populated areas along the Wasatch Front in Utah to the isolated areas near Baker. There would be one or two sheepherders for each 2,000 sheep, and they wanted the best grazing spots. A sheepherder would live out of his wagon, going to a rural store every few weeks to get supplies. His only other contact was with the sheep, his horse and his dogs. Talk about a solitary life. 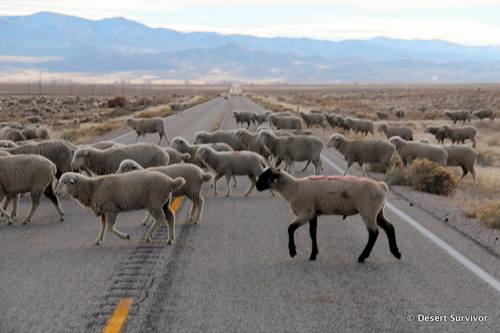 Today, most of the rural stores have closed and better transportation exists, but it’s still a fairly solitary life for sheepherders. Not many people want to do it, and sheep operators often have to recruit men from other countries to be sheepherders. For many decades Basque sheepherders dominated the industry, but today it’s mostly Peruvians. They often spend a year or two watching sheep before they go back to see their families.

If you see a flock of sheep, take a close look. Do you notice a few brown ones? The sheep owner usually puts in one brown sheep for every 25 or 50 white sheep so they can be counted more easily. Also, an occasional sheep has on a sheep bell, ringing loudly as the sheep moves, so that the sheepherder can follow the sheep by sound.

Big white dogs with the sheep are sometimes referred to as livestock guardian dogs. The most common types of sheep dog in this area are the Great Pyrenees and the Akbash. They are strong and loyal, and they always stay with the sheep, protecting them from predators like coyotes. They also protect them from strange humans, so it’s never a good idea to get out of your car near a big sheep dog.

What else is going on in Baker in November?
Well, November First is the time-change, and the shorter days mean things are really slowing down in Baker. This is a time to cherish the cooler nights and crisp days. Many of the local businesses are closing up for the season, but there is still lodging, food, and gas available in town year-round.

There are some special events in Baker that the town is looking forward to. The school Harvest Festival will be held Friday, November 13 at 5:30 p.m. at Baker Hall (the pink building in town). It’s a potluck dinner and then an auction to raise money for the local schools. 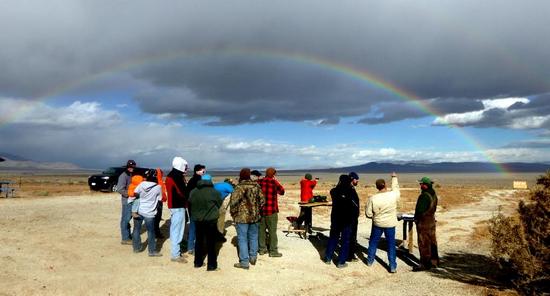 The annual Turkey Shoot will be held Saturday, November 21 with signups starting at 8:30 am at the old dump south of town (take the road opposite the cemetery). You don’t actually shoot at turkeys, they are the prizes! The turkey shoot is a competition with varying distances and classes of shooting. Pistol, rifle, shot gun, 25 yd, 50 yd, 100 yd, 500 yd, clay pigeons, open sights, scopes, and various combinations of all these and more are held. Archery is also included.

Lehman Cave will be closed for cave tours on Thanksgiving Day, one of three days the cave is closed (the other two are Christmas and New Year’s). Cave tours will be held every other day of the month. For more information 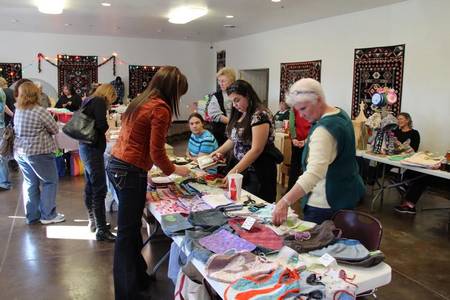 and to make advance reservations, call 775-234-7517. The rest of the park is open throughout the month, although some roads will be closed as they get icy and snow-covered.

The Border Inn will hold their annual Holiday Craft Fair on Saturday, November 28. This is a great time to get your holiday gifts and find something unique and locally made. It’s always a popular event with lots of socializing and is a great way to kick off the holiday season.

And if you want to learn more about sheep, check out the Border Inn — there is a whole wall of photos of sheepherders, sheep owners and others associated with the sheep industry.