The owner of a bicycle taxi service threw in the towel this week and decided not to come into Wendover after all. “The casinos said they would charge me with trespassing,” said Salt City Cycle owner Louis Gasper. “It just wasn’t worth my time or my effort to fight them. We decided for now not to come out to Wendover and not throw good money after bad.”

Less than three weeks ago, Gasper expressed frustration but was still optimistic.

“We have had some problems getting the casinos on board,” Gasper said in Late September. “They have to get the okay from corporate, but we still plan to come.”

The major issue, Gasper said, was whether the pedicabs would be allowed to wait for fares on casino property or have to wait off property or to be called like a regular taxi.

“Whether or not the pedicabs can queue up in the casino parking lots or not is between the pedicab company and the casino,” said WWPD Lt. Don Lininger. “Most casinos on the Las Vegas Strip have taxi queues, and I guess so do some hotels in Salt Lake, but we never had that them in Wendover.”

“The police have been super supportive and so has the city,” Gasper added. “We will come out to Wendover even if we have to pick up fares on the street.”

The West Wendover City council changed the local law to allow for and to regulate pedicabs at Gasper’s request. And according to the Salt Lake businessman the business plan is sound.

“The casinos spend $700,000 a year operating their shuttle service and the town also supports a taxi company.” Gasper explained. “We think Wendover could easily handle a pedicab service. We were out there a couple of months ago just to check out the terrain and see if we could handle the hills. It looks great.”

That optimism turned into bitterness last week when Gasper said he was threatened with being charged with trespassing if he ran his service to Wendover.

“I paid for a new insurance policy, cost me hundreds of dollars just to indemnify the casinos,” he added. “Then after all of that they turned around and said they weren’t interested. I had hoped that the city would come to my defense, but everyone is owned.’

With the pedicab service and a new liquor store set to begin construction, it was hoped that West Wendover may be coming out of a more than decade long decline in the number of small businesses.

While there were signals that West Wendover could report a significant gain in the number of local business for the first time since 2003 that increase will have to wait until next year. 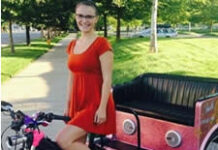