It’s a little after 7 on a clear September morning and we are standing on a large open flat on the east side of Highway 305 about 20 minutes south of Battle Mountain and I-80. Cattle are getting water at the other side of this flat; at this side, bicyclists are unloading gear from trucks, vans and SUVs and assembling their bikes.

Officials of the International Human Powered Vehicle Association wearing fluorescent lime-green safety vests are talking over radios as they prepare for the first speed runs of the day.

Once a year the modest little city of Battle Mountain becomes the center of a narrow slice of international fame as bicycling teams arrive from around the world for the World Human Powered Speed Challenge.

We’re waiting for the big yellow bus to pass on its way back to Battle Mountain with students from outlying ranches on their way to school. Once it’s gone by, the road can be closed for the first heat of speeding bicycles. 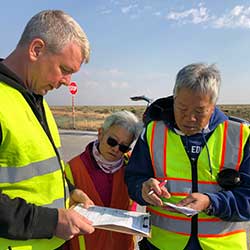 There are 30 or 40 people, many from Universities, readying their bikes for the morning run. They have come from around the world to compete (if that’s the right word) in this supreme test of brains plus brawn, and their excitement is expressed by intensity as they assemble the intricate machines they’ve brought from home.

“Ten minutes until road closure” The teams are made up of aerodynamicists, if there is such a thing, and physicists as well as fit young men and women. The bikes are thin-shelled eggs on wheels into which the cyclists are carefully inserted, and then the seams are taped over to smooth it down.

“It shows just how thin the margins can be when a bike is refined to this degree — a day earlier, a squashed bug on the nose of the bike wrecked the team’s chances of hitting maximum velocity.”

These are qualifying heats, to rank the participants according to how close their their top speed comes to the world record in their category. When the competition begins, the fastest bike goes first with the slowest last. The last thing they want is a traffic jam at the finish line, which would be hugely dangerous for all concerned.

“Five minutes until road closure” There is no category for the Sprocket Rocket, and no competition for it 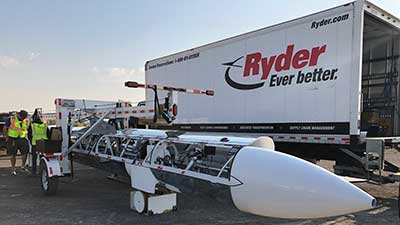 if there were — it can set a new record every time it goes out. This is the 5-man tandem 4-wheeler unveiled just weeks ago to the astonishment of the speedbiking world. It even sports a faux jet at its tail as a touch of whimsy, if that’s not what the whole thing is.

It has traveled here on its custom-built trailer, which is the only way it can move unless there are five fit riders inside it and a long straight level road ahead. We are fascinated by it. The 5 determined riders only managed 56.something mph — but it was enough to set the new World Record for a 5-rider bike.

Now the Start Official and his two assistants alert the teams scheduled for the first heat.

They were already alert of course, and walk the bikes out onto the apron.

“Close the Road!” At once the flagger moves out onto the pavement with the STOP sign in hand. As soon as he assumes his position the teams move their bikes out onto the road and line them up, fastest first with its nose on the starting line, a white stripe painted on the pavement for the occasion.

One after another they are launched down the highway by teammates, and after each one a chase car zooms out of the flat and onto the pavement in pursuit, ensuring that help is close at hand in case of a spill. The 20-minute window is brisk with bikes moving into place and then wobbling off northward, gathering speed all the way. There are distance markers every half mile, a 200-meter speed trap at 2½ and 5 miles, with the catch zone beyond that.

“Open the Road!” The bikes have all been measured through the speed trap, and three cars are permitted to resume their journeys toward Battle Mountain and I-80. A few minutes later three Austin-bound cars came by from the north. 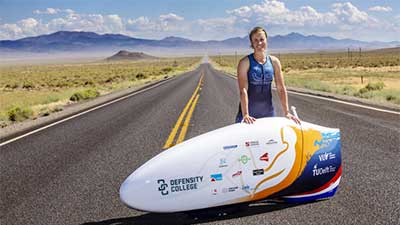 After our visit in 2017 I predicted that one day a cyclist from a faraway place would set a new speed record of 90 mph or more at Battle Mountain, but it hasn’t happened yet.

For the most part this unique event goes unnoticed because it takes place so far away in the unexceptional community of Battle Mountain. And for that matter it’s often overlooked even in Battle Mountain itself, since almost all of the activity takes place well out of town. 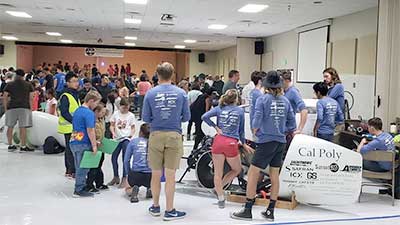 The Challenge has much higher local visibility this year because the school district made a point of introducing the event into its curriculum beforehand, and so the local kids had become conversant about recumbent bikes, fairings and gear ratios. The Tuesday afternoon Show ‘n’ Shine, ordinarily the province of human powered speed enthusiasts, was filled wth enthusiastic children thronging the room and eagerly gathering autographs from the riders.

Calling Battle Mountain unexceptional is high praise, by the way, compared to the way Gene Weingarten described it in the Washington Post Magazine in 2001. He called the inoffensive little place “The Armpit of America” 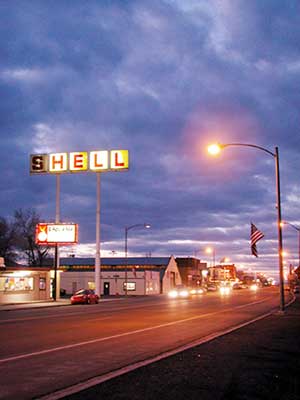 The homely burg had been minding his own business and out of nowhere it was blindsided, mugged in the national press as the nation’s least attractive community.

When the shock had passed Battle Mountaineers began to realize they’d been floored by the unfamiliar knock of opportunity. Within two weeks armpit T-shirts were available at the drugstore and despite some mixed feelings a Festival in the Pit was held in June. Shar Peterson at the Chamber of Commerce sent a blanket invitation to any community that had been considered an armpit: Free booths at the Festival if they’d just show up and man them. In response, the Bakersfield Chamber of Commerce chartered a bus to bring members to Battle Mountain to see what we’ve got that Bakersfield doesn’t.

Other small Nevada communities breathed huge sighs of relief when Battle Mountain was named the National Armpit but were soon envious of the attention the town was receiving. 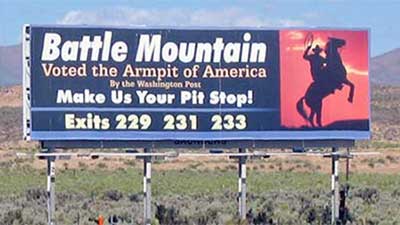 Battle Mountain was featured on CNN, Good Morning America and the BBC, and the phones in the Chamber of Commerce office never stopped ringing.

Eventually though, local folks tired of making light of the armpit designation and took down the billboards on I-80 urging travelers to make a pit stop. The town has resumed its quiet existence with the annual exception of the IHPV World Speed Challenge, and the small crowd of international visitors that it attracts is utterly respectful throughout.