Sometimes we tend to overlook what is right in our own back yard.

A few weeks ago, some of my buddies decided to do a ride in the Pine Nut Mountains on the east side of Carson Valley, a pretty popular destination. My friends were going to stage at the end of Johnson Lane where there is plenty of parking. Their goal was to have lunch at Galena Saddle at the base of Mount Siegal, which is the high point in the range at 9,456 feet above sea level. 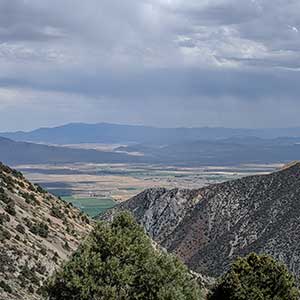 Galena Saddle is probably about 8500 ft. and the views from up there are spectacular.

Since the group was gathering at the Johnson Lane site, I decided to leave right from my house which is in Topaz Ranch Estates, at the very south end of the Pine Nuts. I made arrangements to meet the group for lunch at the Saddle.
Joining me from this end was my brother Scott and his wife Piper and Ray and Toni Van Winkle. 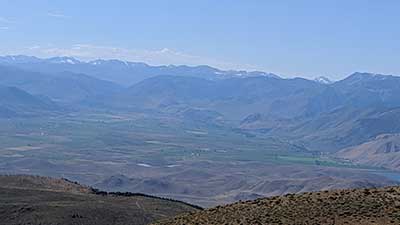 The first part of the trip was to ascend Minnehaha Canyon.  There are some pretty good ‘steeps’ there and some bird’s eye views of Antelope Valley and Topaz Lake.  It’s about seven miles from the base to the top of Minnehaha.
From there, we wound down along a road I have traveled many times before down Mill Creek Canyon.  This has always been a favorite spot for me ever since my days in high school in Gardnerville. The canyon has a pretty little creek that runs through it and there are numerous aspen trees in there. Some are adorned with Basque sheepherder carvings and dates. 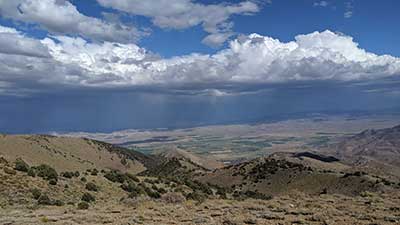 The road doubled back up and put us near the saddle around 11:30.  Enjoying the views from both sides, Carson Valley to the west and Smith Valley to the east, it wasn’t long before the rest of the group joined us for a leisurely lunch of cold cuts and camaraderie until it was time to head down.
My small group decided to go down Red Canyon. Red Canyon empties to the east into Smith Valley.  There are some big rock formations in there and is a fun ride. Upon reaching the bottom, the trail empties on to Upper Colony road in Smith Valley. 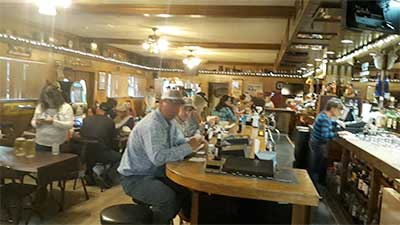 We decided that since it was only 2:00 or so, to do a brief detour to the CG Bar in Wellington.  We had a beer and then headed back toward my house.
The trail to my house traverses Rickey Canyon. From where Rickey Canyon leaves Upper Colony to its junction point with the Minnehaha trail is about 6 miles. Nothing too difficult but a fun ride altogether. The trip down Minnehaha is a little different than the trip up. 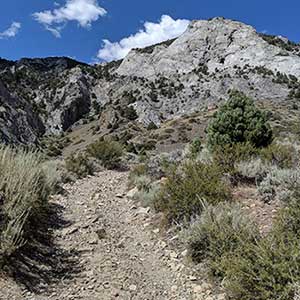 As I mentioned earlier,  Minnehaha has a few ‘steeps’.  Not only are they steep but have a lot of loose rock and dirt, so it’s definitely a low gear “walk” the machine down the slope.
The Minnehaha fire affected this area back in July.  Visible from my house, the fire burned for several days and consumed a pretty healthy acreage.  From my back yard, we had front row seats to this event.  The “big boy” planes were pretty impressive.
―advertisement―