The Big Bicycling Event in July is the 39th Tour of the California Alps – Death Ride, set for Saturday, July 13, 2019. This is a premiere ride for endurance bicyclists and is long steeped in California Bicycling event history.

This ride started as a one-day ride as part of Super Tour, when a group of endurance bicyclists annually got together to challenge themselves with a week-long tour featuring multiple climbs along the eastern Sierra.

It was coined as the Markleeville Death Ride and continued through 1980. Wayne then moved away from the area and tour was defunct until 1983, when the Alpine County Chamber approached the newly formed Alta Alpina Cycling Club to create a partnership in recreating and producing the one-day ride to bring more summer tourism into Alpine County. At that time the only entities that were bringing tourism dollars into the county were winter based businesses from Bear Valley/Mt. Reba and Kirkwood Meadows Ski Resort.

I was a founding father of the AACC and served on their Board of Directors as Vice President and found myself, along with another co-founder, Clean Machine Bike Shop owner Bill Miller, putting the logistics together for the ride. I learned more than I bargained for in producing this ride in remote Alpine County where we had to build a course from the ground up. Finding appropriate areas for rest stops, trucking in water and using garbage containers, providing food, tech and Sag support. 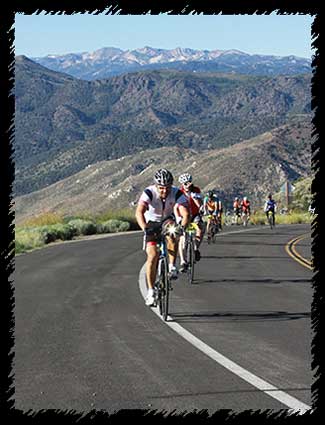 In 1984 the revamped Markleeville Death Ride returned to Alpine County with the start-finish at Diamond Valley School. We attracted 300+ riders and had a shotgun start using the original ride configuration of Kingsbury (Daggett Pass), Luther Pass, Carson Pass, Monitor Pass and Ebbetts Pass. 154 Miles and over 15,000 vertical feet of climbing. That first year we had 16 finishers who completed the ride. The Alta Alpina Cycling Club made $3 per rider from the entry fees and after this first year, $5 per rider the second year (with 700+ participants) and eventually, became a 35% partner with Alpine County Chamber in producing the ride…

Remember, in the mid 80’s, there were no computers, nor internet nor any such thing as online registration or online credit card payment. I recall having to type pages of information to deliver to a layout artist to create a printed brochure with a mail-in registration form that was distributed either by direct mail or at bike shops. Participants had to hand fill-out an application and send a check for payment with application to register for the ride. There was no electronic database, and we had to file each application in alphabetical order to check each rider in, and have them sign a waiver (yes, we did have the legal stuff back then) before giving them their ride packet and bib number. Oh, Thank goodness for visionaries and the internet!

For the next several years, the ride was refined to add tents and shade, bottled water, tech support stations as well as for the first time, portable toilets at rest stops. The Start Finish was moved to Turtle Rock Park and we were able, with agreement of California Highway Patrol and Caltrans, to close Monitor & Ebbetts Pass.

The course was then changed to exclude Daggett Pass and Luther Pass with riding both the front and back sides of Monitor Pass and Ebbetts Pass, with Carson Pass still in the configuration as the last pass 5. We added skull & cross boned pass stickers distributed at top of each pass, so riders could proudly display what passes they rode on their event bib numbers.

We also added an annual poster to which all 5 pass finishers were invited to sign. These posters were displayed in the chamber offices encouraging riders to come back year after year, so they could point their signatures out to their friends, proving how many times they accomplished 5 passes.

We built the success of the Death Ride on our “Tongue in Cheek” approach to our riders offering challenge and fun and an experience likened to be soon known as the “Woodstock” of Bike Rides. We called our volunteers “The Death Squad” and then renamed them, the “Skeleton Crew”. We even had a traditional recorded wake-up call blaring over the P.A. system at 4:30am, that featured the sounds of Cows Mooing, Jets Flying overhead, Grace Slick’s Volunteers of America and ending with Jimi Hendrix’s Star Bangle Banner. These little tongue in cheek additions were well received by the thousands of participants and the Death Ride received cult like participation.

Back in those days, we were also excited about introducing new bicycling /sports related nutrition products to our riders and recall befriending Brian Maxwell, who rode the event and helped launch and introduce a product they called “Powerbar. The rest is history… We also helped introduce “Cytomax” Sports Performance Drink Mix to the cycling community.

I recall in 1992, when heading out to the start at 3:30am in the morning, I saw lightning flashes far off, south and east over the mountains. I had spoken with Mike Alger, the weatherman for KTVN Channel 2 / Reno, the night before and asked him about the weather. He told me a very slight chance of a Tonopah low seeping westward, but should be good weather. When I got to Turtle Rock Park and fired up the wake-up call, I recalled a couple of gals in bike shorts and halter tops rearing to go and asking me if it was okay to start. to which I informed them that we were not able to start until official day light at or around 5:30am.

By 5:30 am I climbed into the Tahoe Amateur Radio Association’s communications van and heard reports coming from the back side of Monitor Pass that the skies were turning dark with black clouds approaching. And, then I checked in with the ham-op on top of Ebbetts Pass, and they reported thunder clouds and starting to rain… Remembering the image of the two gals in just bike shorts and halter tops. I sent a volunteer to Gardnerville to buy as many large trash bags as possible and return to set up a distribution point and the junction of Hwy 89/4 to give out trash bags for riders to protect themselves from the rain. A very challenging day and we ended up having to set an earlier cut off time at Picketts Junction and not to allow riders to continue to Carson Pass. as there was reported 3” of hail and rain falling on the roadway. We mustered a large truck and shuttle buses from Kirkwood to help in evacuating the course that afternoon. I recall photos on the front page of the Tahoe Tribune the following Monday, with Death Riders riding with dark green trash bags covering their upper body in the pouring rain, riding past Sorensen’s Resort on Hwy 88.

In the mid 90’s we registered More than 3,300 riders to participate and realized there weren’t enough cooking facilities in Alpine County to cook and provide the after-ride meal for that many participants, nor could we store enough ice to be distributed through-out the course. It became too successful to the point that we all agreed to trim back the number of participants to 2750 for several years after.

I am proud to have built this ride with the original members of the Alta Alpina Cycling Club, from 1984 through 1995 and the Club continued to partner with the Alpine County Chamber through 2009. Today, the Alpine County Chamber of Commerce continues to produce the ride as the largest one-day event for the county and benefits many non-profits. For more information visit: https://deathride.com 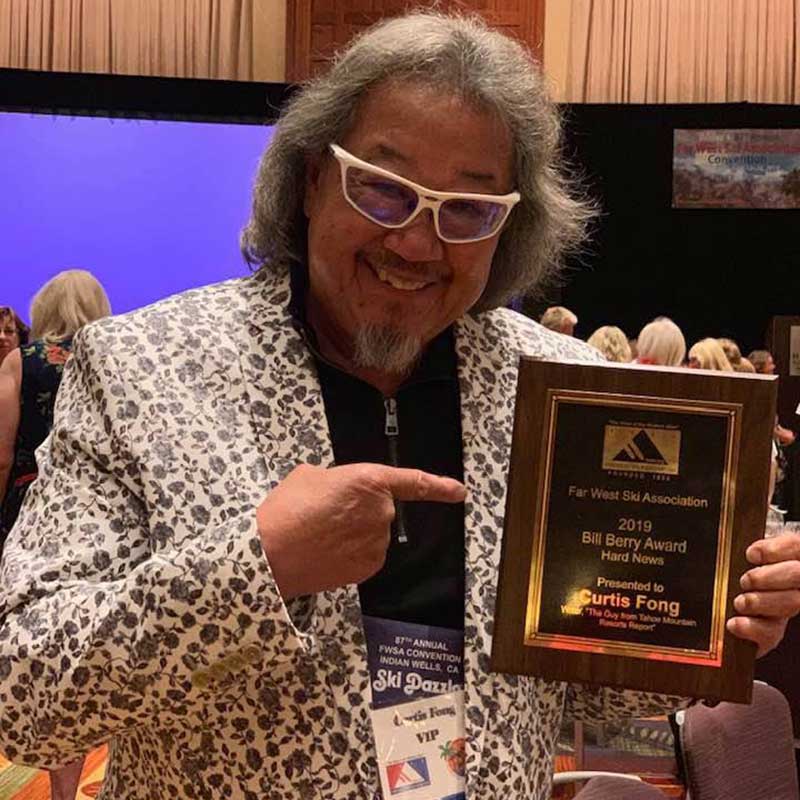 Circling back around to skiing . . . I was recently honored with the Bill Barry Hard News Journalism Award at the Far West Ski Association’s annual convention held at the Hyatt Regency Indian Wells Resort and Spa, on Saturday, June 15. I was recognized for producing “The Guy From Tahoe” Mountain Resort Report. A true honor to receive this recognition after 30 years (since 1989) of getting up at O’dark Hundred, each morning (5 months) without a day off, writing and producing a radio ski report and hosting television with ski innformation and interviews; plus, faxing or emailing copies to over 200 entities and most recently producing my winter travel blog and Mountain Resort Report, online with my website: www.bikeandskitahoe.com 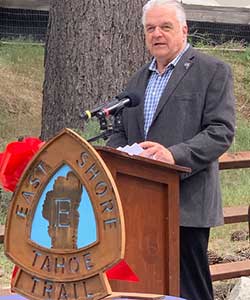 And Back to Cycling . . . The Big News is the opening of the East Shore Trail by Governor Sisolak, a 3-mile, multi-use path extending from Incline Village, adjacent to NV Hwy 28 to Sand Harbor. This trail is intended to help eliminate parking on Hwy 28 and offer an alternative corridor for pedestrians and bicyclists to travel back and forth to Sand Harbor.

Ninety parking spaces have been added just north of Lakeshore Drive on Highway 28 in the area that was formerly the entrance to the Ponderosa Ranch to access the trail. 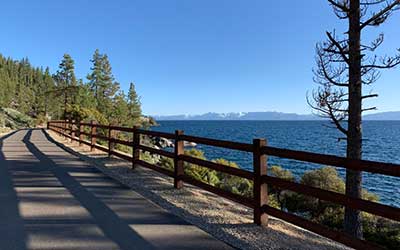