This year’s Rural RoundUp — the 25th Annual — was held in the Carson Valley. 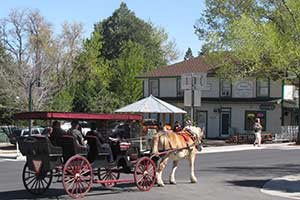 For the rural tourism marketers in attendance it was an enjoyable visit to one of the most beautiful places in the world, a social event and statewide gossip-swap of exceptional interest along with a set of workshops and presentations geared to widening horizons on the job. It seems to have succeeded on every level . . . including the food, which was exceptional. 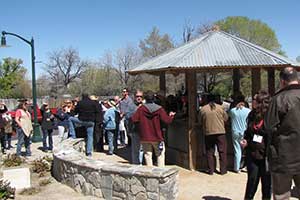 The Carson Valley covers a lot of real estate, and fittingly enough the proceedings began in Genoa, where Nevada itself began, at least in its governmental aspect. 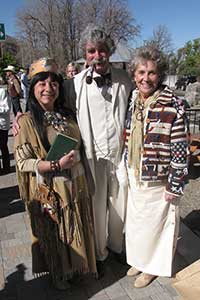 The pretty little town at the foot of the Sierra was at its best on this bright sunny afternoon, presenting itself most hospitably to these curious tourismic visitors from Elko, Laughlin. Pioche, Pyramid Lake, Ely, all over the state. 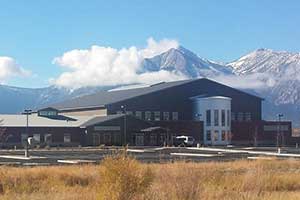 Our Genoa hosts welcomed us to the Valley with everything the little town had to offer, which is considerable: food, drink and history, in the form of Sarah Winnemucca, Sam Clemens and the Court House Museum. 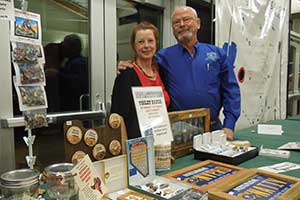 But we wanted more, and we got it. Thursday’s dinner was held at the Senior Center in Gardnerville, which occupies the eastern end of the amazing new Douglas County Community and Senior Center on Waterloo Lane. The occasion was enhanced by the presence of Made In Nevada, a non-profit trade marketing association of makers and vendors of products made in the state. 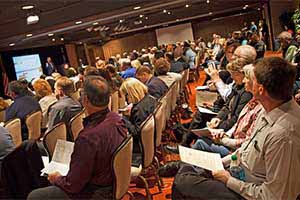 Twelve booths introduced members with a wide variety of products, most of them from the Valley or nearby — and there was a brisk trade in soaps, essences, jewelry and art in various forms.

It’s difficult to photograph the workshops, presentations and meetings that took place over the course of the event, because all the real action is taking place inside the skulls of the attendees. 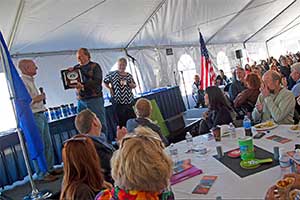 Their studious expressions are about the same whether

they’re listening to Mark Hoffman talk about Itinerary and Product Development or to Janet Jones talking about Paranormal Tourism. [You can download many of the workshop presentations from the Agenda page of the Rural RoundUp website here]

But when the luncheon program on Thursday was hijacked and morphed into an affectionate tribute to Larry Friedman on the occasion of the 25th Rural RoundUp, it was big grins all around. Sue Barton, Bill Chernock and their co-conspirators had imported some of Larry’s henchpersons from years past — Brenda Hughes and Rich Moreno among them — to offer their congratulations.

So profoundly has he affected this hil-Larry-ous event that it’s impossible to think of it without him and his trademark loud laughter coming from here, there and seemingly everywhere over the course of the long day-into-evening. In the photo above this 3-some, you’ll notice a table with a green can on it. Under the big white tent there were more than two dozen tables similarly prepared.

Once Larry had regained control of the agenda, he issued instructions. “On my signal you will open the can and empty it onto the table. These are puzzle pieces, which you will immediately begin working together to assemble. First table to complete their puzzle is the winner.

The activities, cerebral and otherwise, continued into the evening with a banquet honoring some of the most active and productive players in our game. 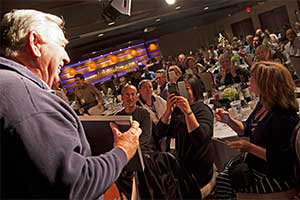 Jack Sanders (left) and Ray Fox were honored for 25 years’ participation in Nevada Tourism. To my ear the top news that emerged was the two-year $20.2 million marketing contract with the Fahlgren Mortine agency. Fahlgren and the Abbi agency of Reno will work together on TravelNevada’s integrated tourism marketing campaigns, evolving the popular “Don’t Fence Me In” campaign through public relations, paid media and digital channels. 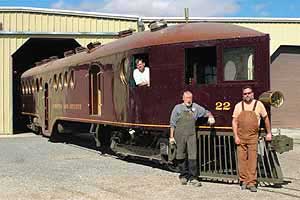 One of Nevada’s Crown Jewels is stored in a tin barn on the south side of Carson City. It is the McKeen Motor Car, a gasoline-powered locomotive limousine that carried passengers, freight and mail from Carson City south to Minden and north to Reno for 35 years starting in 1910. It was a wonder of its day, and it’s even more so now that its day is past.

It was retired in 1945 after traveling more than a half-million miles, but then served for ten years as a diner and then for 40 more as office and stockrooms for Al’s Plumbing, long a familiar sight on Carson City’s south side.

In 1995 the car was donated to the Nevada State Railroad Museum where the meticulously restored machine was unveiled on May 10 2010, 100 years to the day since the car’s arrival in Carson City.

Brief notes from Beyond the Mountains: Genoa holds its annual Cowboy Festival on Apr 30th through May 3rd. . . Mesquite will play host to a Smokin’ In Mesquite BBQ Championship on May 2nd – 3rd . . . In Pahrump there will be the Bob Baker Wildwest Bluegrass Festival on May 2nd through 4th. . . Nevada historian Jack Harpster will be at Sundance Books in Reno on Saturday May 2 at 1 pm to read from his new book, Lumber Baron of the Comstock Lode, the Life and Times of Duane L. Bliss. More information.

On May 2nd and 3rd Virginia City’s 32nd Annual “Chili on the Comstock” returns to historic C Street, Virginia City’s Champs d’Elysee. The event promises all the favorite flavors and brings music and the return of the Fireball Saloon Crawl, as well as family-friendly activities and the Kids Zone, which includes bungee trampoline, giant slide and bounce house. The event runs both days 10 am – 5 pm. Bring the whole family to enjoy the chili 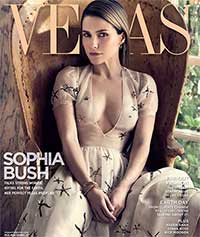 . . . As a favor to visiting provincials, Las Vegas Magazine presents a list of cool outdoor dining places. They all look inviting as long as the temperatures allow it . . . Mother’s Day weekend is busy around the state, starting the previous Wednesday: the famous 36th Annual San Gennaro Feast in Las Vegas takes place May 6-10 . . . A new event for Reno is SculptureFest running May 8th through the 10th. . . At the Nevada State Railroad in Carson City if you can’t get tickets for the McKeen Car on Mother’s Day weekend, check out the Virginia & Truckee Diesel Train Ride . . . Also for Mother’s Day weekend, the annual Arts Festival of Henderson, May 9-10th. . . As a part of Preservation Weekend,

Ron Reno of Silver City will lead a Tour of Historic Schools on the Comstock on May 9th. This tour features three 19th century schools on the Comstock: Silver City, Dayton and Virginia City. The tour begins at 135 Shady Lane, Dayton at 1 pm. The first school on the tour is the 1865 Dayton Grammar School, which is celebrating its 150th birthday this year. The second stop on the tour will be in Silver City, and the final stop will be in Virginia City at the Fourth Ward School. More information: Ron Reno of Silver City, (775) 846-3474 or RLReno@gbis.com. Cost: $15 per person; group limited to 25 people; reservations required

. . . Is the new Speedway Station BBQ Restaurant the only place to eat in Wendover that’s not a casino or fast food? Owner-chef Jeff Dunham says, “We feature many BBQ and Smoker specialties: pulled pork and ribs, grilled chicken, flank steak and turkey breast. Our menu will change often — sides this weekend are bacon cheesy mac, au gratin potatoes, baked beans and our homemade cornbread. Think of it as a summer cookout, served take-out style.”

Reno’s Midtown Wine Bar welcomes Richie Richard Ballerini and Lee Edwards on Thursday May 14 for an evening of song, dance and the best spirits in town . . . The next day May 15, 10 am – 3 pm, is Diana Mine Day at Berlin Ichthyosaur State Park. 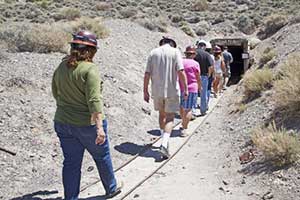 Carved out of solid rock, the Diana Mine is a walk through the historical past, much as it was when activities ceased, giving the impression that miners are due to return for the next shift. Visitors follow the original track laid down for the ore cart, encounter various hand tools and drill steel, a stope and ore chute, a winze, timbering, and of course the gold and silver bearing quartz vein. The Park is 23 miles east of Gabbs via State Route 361 and 844. Cost/Admission: Entrance is $7; Nevada residents receive a $2 discount. No additional charge for the mine tour. More info: Jeff Morris (775) 964-2440, or send an email . . . 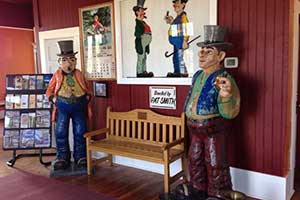 The Stiff brothers were WWII vets who came home to Lovelock and made themselves locally famous by putting up little signs ala Burma-Shave with their cartoon likenesses and the caption, ‘2 Stiffs Selling Gas in Lovelock’. It’s nice to see them looking so fit and fine and in out of the weather after so many years out by the gas pumps . . .On May 16 as part of Nevada’s annual Historic Preservation celebration, an exhibit of rarely seen photographs, newspaper columns, essays, books, posters, and other artifacts related to the “cultural re-population” of the historical community beginning in the the middle 1960s will be displayed at the Silver City schoolhouse. Included: a screening of the director’s cut of Silver City native Mary Works’ documentary film “Life and Times of the Red Dog Saloon.” Mary Works Covington will introduce the film; afterward, she and her father Don Works, co-founder of the Red Dog Saloon, will host a Q&A . . .

Taki Telonidis and Meg Glaser of the Western Folklife Center are headed to the Duck Valley Indian Reservation in Owyhee, Nevada, this Thursday, to screen the Deep West Videos made by middle school kids at the Owyhee Combined School. The kids’ Deep West Videos premiered at the National Cowboy Poetry Gathering in January. You can watch them here . . . On May 15-17th, Laughlin is featuring a Riverwalk BBQ Festival . . . On the same May 15-17th weekend Ely hosts the Silver State Classic Open Road Race. . . The Spring Wings Festival will be held on May 16th in Fallon. . . Reno’s 3rd Annual Spring Horse Expo will be also be held on May 16. . . On May 16-17 Carson Valley Art’s Council will present Something in the Wind at Dangberg Home Ranch, a two day festival that includes an Artisan Marketplace, kite flying demonstrations and kite making, special presentations on birds, kinetic art, children’s hands-on art, wind energy, music and all things “Nevada Wind” . . .

Sheriff Stone writes from Gold Point “just letting everyone know that we are going to have our annual ‘Paranormal Weekend‘ May 22-24 again this year. We will be doing all food starting with Friday breakfast. Lunch Friday, Saturday and Sunday. Breakfast Friday, Saturday, Sunday, and Monday. Dinner Friday, Saturday and Sunday. Live entertainment and the “paranormal dinner with a ghost” will return again also. If you are interested in more info like the cost of and what we’re serving for meals or would like us to send you a flyer about the weekend please lettuce know. At this time all RV spots and cabins are taken. We have plenty of dry camping available. Please remember no credit cards. CASH ONLY. Nearest ATM is 30 miles.” Need I say this will be an unforgettable event? . . . In Las Vegas at the Bellagio, Fabergé Revealed runs until May 25, 2015. . . Tonopah’s Jim Butler Days is on Memorial Day weekend, May 27-30 . . . The Northeastern Nevada Museum in Elko features Great Basin Native Artists in a continual event that will run until May 27th.

Overheard at Firkin & Fox in Carson City: Every age is fed on illusions, Charlie, otherwise people would give up on life early, and the human race would be over and done. 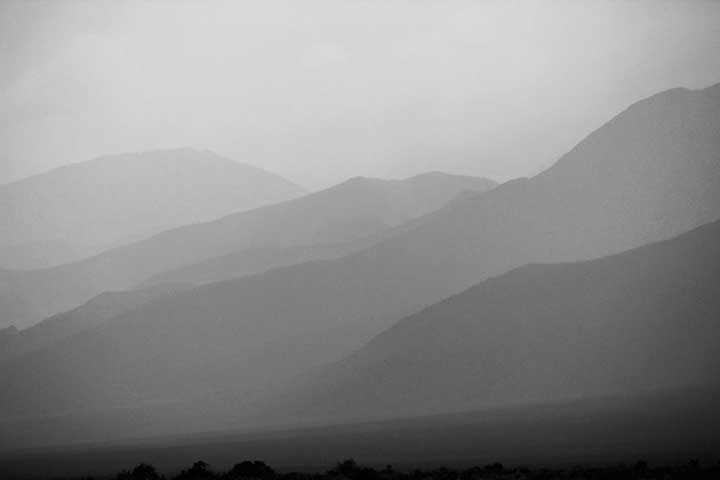 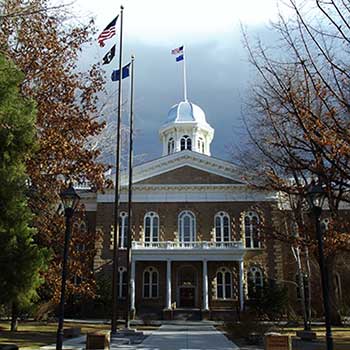