By El Picon
(Picon Drinkers of the American West)

There are three Gates east of Fallon. Lt. Simpson entered the area from the east and came down what he called Gibraltar Canyon, named for the large rock outcropping overlooking this area.

He stated that he would call this the Gate of Gibraltar. A little too much for the tongue to spill out, it was later commonly called,           and renamed, Eastgate.

Middlegate was so named for its gateway to the south and there is actually a Westgate which is roughly where the big rock water tank/well is located on US 50 west of Middlegate.

The names are deceiving. To me, they conjure up images of the gates of Heaven or Paradise. Not so. To the south of Middlegate lies the Gabbs Valley. To the west of Westgate lies Frenchmans flat. It is (arguably) some of the driest, dustiest stretches of land in the state.

My favorite for as long as I can remember is Eastgate. Lying beneath Gibraltar Rock, the Eastgate ranch sits in what one time was a lush green oasis. The ranch is still there having had numerous owners and had fallen into disrepair. There is evidence that someone is working on making it shine again. 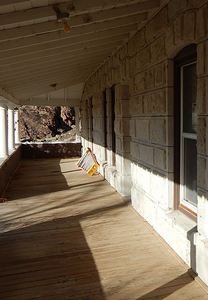 The main house was built of white rock quarried in the area. It really is a substantial structure. Next to the main house sites what was once a store, gas station, and restaurant. It was a happening place along old US 50 on the west side of Carroll Summit. Here they had a full line of Chevron products for the motoring public.

The Eastgate Ranch owned the Store but leased it over the years to various operators who made a go of it. At one time, this tiny place had a gaming license and offered slots as well as ‘punch cards’.

The end of Eastgate station came when US 50 was rerouted around Carroll Summit in the mid 1960’s. The ranch has survived in sorts but there is one geographical feature that has been a detriment to the ranch. It sits at the end of Buffalo wash which floods on a fairly regular basis. Driving up the canyon, one can see the deep wash that can carry tons of water and debris right into the ranch.

Just when you thought too much water was a problem, then came too little. My friend Bunny Corkhill’s family owned the ranch in the ’50s and she told me how beautiful it was with green meadows, orchards and the

like. Then came the big earthquakes of 1954. Two quakes hit Fallon in July of that year, and in December the Fairview Peak/Clan Alpine quakes hit. The first was measured at 7.3 while the second was slightly less at 7.1. They were characterized by the big jolts and massive movements of the earth’s plates rather than the rolling quakes noted in Fallon earlier in the year. In some places 50-ton boulders were scattered across the highway. Underground mining timbers were snapped and crushed like toothpicks, and large fissures were opened up in the ground. Eyewitness accounts of this earthquake say that the jolt was preceded only by a large boom that started just before and lasted long after the big jolt.

This Fairview Peak/Dixie Valley fault extended 54 miles, and in some places the ground dropped twenty feet!

The cruel aftermath of this was that it completely rearranged the groundwater system in the area. Known producing springs on the ranch just stopped flowing. Areas further down in Dixie Valley opened up new artesian springs, changing the lifeblood of the ranch. Without a reliable water source, ranching would no longer be a viable operation. Bunny’s parents hung on for a while but eventually moved on.

Middlegate station is located on the Middlegate Ranch, on the western side of Highway 722, which was once the Lincoln Highway or US 50. It was once routed around the Desatoya Range over New Pass but was rerouted over Carroll Summit in the 20’s, helping carve off a large chunk of mileage. Years later, the route was moved once again back to the original Overland trail route over New Pass.

As you travel from west to east on the Carroll Summit road, it is a pretty good pull, especially the last few miles over the summit. Then, check the brakes and hold on to your hat because you are in for a nice fairly steep and twisting ride as the road descends down toward Smith Creek Valley. The road will take a dog leg to the right and slice through a tree shaded canyon, and you might notice the remains of what was once Carroll Station. This little building was originally built in South Tahoe California, and in 1925, it was hauled from Tahoe, over the pass and squarely set in this location.

Immediately, gas pumps were put in, as well as a small store, café and, of course, a bar. The establishment enjoyed a business for a number of years. I’m pretty sure no one got rich here, but there was a steady stream of vehicles either slowly heading up the pass or barreling down from the top. It was a full service Texaco station. I was amused that Chevron had Middlegate while Texaco had the other side.

In ‘the day’ there were little taverns like this all over the state. They usually were fronted by a service station. Cars of the era had not much more than 10 gallon fuel tanks, and fuel economy? Who cares! Overheating was a constant problem, as well as tire problems. These little places were necessary. Plus, not only did they serve the travelling public, they served as the meeting place for the resident miners, cowboys, Indians, farmers, and ranchers.

The people that ran these places could be a unique bunch too.

The last owners of Carroll Station before the highway was rerouted out of the Canyon were Fred and Rosie Stephens. These two were legendary in the area. You see, they were first cousins …. but married first cousins. They also were legendary for their marital spats …. not just a little screaming and yelling but real knock down drag out brawls. I heard a story that they used to lock each other in the basement of the place during these feuds. When I was there last week, I went looking for it …. and yes, there was a trap door and a few steps into a low basement. There was no way I was going down to check it out.

Fred and Rosie “were their own best customers” of their bar, and often locals would show up and the party was on. If an unsuspecting traveler would wander in, the place got quiet while everybody waited on edge to see if Fred and Rosie would welcome them as paying customers or run them off in a hail of language, with no services offered or given.

Local legend has it that on certain quiet nights Fred and Rosie’s ‘loving’ voices can be heard in and among the aspens and bushes surrounding this lonely little outpost.

I have camped here a couple of times. I like it because it is easy to get to and it is fairly level. We can get a few rigs in there and have a nice fire going. The drawback can be the way it sits in the canyon: the sun comes late and leaves early on cold fall days.