This year’s Rural Round-Up, the 22nd annual, was held at the Hyatt Lake Tahoe in Incline Village.


Mom Nature provided the glorious weather and the magnificent views, the Hyatt provided the glamorous surroundings, The Cline and Jacuzzi Family wineries brought the wine and NCOT brought the speakers and presenters.
The most interesting presentation may have been the one by John Rubino, a branding specialist (“A product is made in the factory. A brand is made in the mind.”) who has been conducting research with visitors and potential visitors in and out of state, with local input from around Nevada as well. After describing the process of arriving at the basic theme for a new Nevada brand, he announced its result:
“Nevada is for Do-ers.”
This is not the slogan itself, but the organizing principle that underlies a message that can be delivered in many different ways.
I like it.
I think it expresses something fundamental and distinct about the Nevada character that has tremendous appeal for the small and medium-size businesses that are key to

our recovering economic development and prosperity. I hear Vitality, Optimism, Determination with other positive overtones and reverberations as well.

And on the Tourism side it focuses on the attractions and activities that transcend mundane ho-hum sit-on-your-butt stuff like gaming and shows. It says Active not Passive and I think it speaks to those people most likely to make a day trip to explore rural Nevada, hike in the Valley of Fire, attend the Ranch Hand Rodeo in Winnemucca, go camping at Great Basin NP or ride a bike through the Big Smoky Valley with Curtis Fong. Yeah, I like it.
An element of excitement was added to the occasion when Mr. Rubino, Tourism Director Claudia Vecchio and Lt. Governor Brian Krolicki hurried off to present the idea at an Economic Development meeting taking place that afternoon in the Carson Valley.
As for both agencies using the same theme, it can only reinforce the message, which is a plus. And if I were a certain distiller in Scotland, I would apply at once to become the Official State Intoxicant.

beautiful north shore, and by the presence of the “Made In Nevada” exhibitor/vendors with some of the products we make here. Campie’s Lavender Patch, from Stagecoach, brought lavender-based sachets, soaps, lotions and other products that make a better world. Check out the members of this elite group.
There was also an unexpected absence at the event: no Nevada Magazine. Odd that the single best advocate for travel in rural Nevada wouldn’t be here, but given the size of their task and the diligence with which they address it, I’m sure they were back at the office working.
For anyone interested in Nevada tourism it is second only to the Governors’ Conference, and in some ways it’s more valuable. The Governor’s Conference seems focused on the industry of tourism in Nevada while this event is more focused on people and places. This is their opportunity to renew existing bonds and make new connections with one another, and they take full advantage of it.

It was especially gratifying to see as many representatives from hotels and other lodgings properties on hand. These are the folks who collect the room tax that supports this effort, and their participation makes the effort stronger.

The room full of people at the Awards Banquet was actually a huge reservoir of energy devoted to attracting visitors to every part of the state. Rural Round-Up is where this force gets its charge and its direction for the season ahead.
The state Tourism Commission has identified six unique locations around the state as “Nevada’s Treasures”. NCOT’s Discover Your Nevada campaign received 587 nominations in the state’s six tourism territories. The final round of voting closed at 5 p.m., May 4, and the winners are:

When Don Frazier of Paradise Valley, Arizona visited Elko a few years ago, he became a big fan of the Northeastern Nevada Museum — so much so that he pledged to give his entire collection of over 50 original signed Will James art works to the museum for their permanent collection.

His art is appraised at close to a million dollars, and much of it is now on display at the Museum.

The collection is a considerable attraction to anyone interested in western American literature and art, and it has already attracted new activity.

After holding its annual Gathering where attendees could see the collection up close, the Will James Society announced:

“Because of Elko’s strong cowboy traditions and Will James’ ties to northern Nevada, our Society has elected to call Elko its home base and establish a permanent presence in the community.”

Thus Elko continues to establish itself as a center of western life and lore.

Quick notes from beyond the mountains: In Fallon Churchill County Museum Offers free tours of Hidden Cave on the second and fourth Saturdays of each month.

The Museum opens at 9 am on these Saturdays, and the tour starts at 9:30 with a short video and at 10 am tour goers will caravan out to the cave site. No reservations are needed; participants should dress appropriately for the weather, and wear sturdy walking shoes. The trip up the hill is about 1/4 mile, and the trail is not handicapped accessible. This tour is not suitable for young children because of its length and the climb up the hill. There are restrooms and picnic sites available at Grimes Point, 1.5 miles from the cave area parking lot. . . . Also in Fallon: The L.A. Weekly calls the Fishtank Ensemble “one of the most thrilling young acts on the planet” and you know they must be pretty darned exciting to prompt a charter bus from Reno ($38.50 includes a ticket; Get info here) for its May 19 performance at the Oats Park Art Center. The Ensemble’s up-beat sounds include two explosive violins, perhaps the best slap bass player in the world, musical saw, flamenco and Gypsy guitars, trombone, accordion, one little banjolele, along with operatic, jazz and Gypsy vocals . . . Here’s an interesting blog about a family following grandfather’s adventurous journey across the USA: “Several years ago, my dad (Fritz, Jr.) showed me a diary written by his father in 1922, when he and his friend hitchhiked, walked and hopped trains from Philadelphia to California.” The Nevada section starts on Day 6 . . .

One of Nevada’s premier events of the year, and a reader-nominated candidate for the Must-See, Must-Do Awards, is held far off the beaten path about a hundred miles north of Reno. This year’s family-friendly Black Rock Rendezvous begins on Friday afternoon May 25 as participants gather at the headquarters yurt. Both the Saturday and Sunday schedules are busy with activities ranging from talks on “The Prehistoric Archaeology of the Black Rock Region” and another by Will Roger Peterson and Crimson Rose, co-founders of Burning Man LLC, to activities like road maintenance, bicycle races and rocket launching. Both days offer a Kids Camp, and Monday is devoted to clean-up. As the impeccably detailed website states, “This is a Leave No Trace Camping Event. Come prepared. Bring all of your own food and water, and pack it out too.” Those who do will have a uniquely rewarding experience.

Overheard at Cowpoke Cafe in Lovelock: “You can tell lies and go forward, Guy Wayne, but if you do you can never go back.” 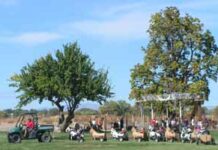 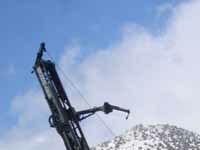 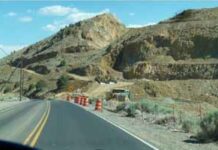