The Nevada Travel Network 2012 Person of the Year —

is [ta-daah!] two people: Fred and Nancy Cline, who have committed themselves to restoring Tonopah’s classic Mizpah Hotel, first to its function as a full-service hotel half-way between Reno and Las Vegas, and then to its rightful place as a premier destination in Central Nevada.
The Clines are winemakers in northern California’s Carneros Region, with family ties to the early days in Tonopah and Goldfield. They have the qualities and the resources to bring the Mizpah back in fine fashion, and Tonopah is already feeling the benefit. I could go on about how wonderful this investment is for Tonopah, but Senator Bryan and Governor Sandoval handled that job very well at the Grand Opening (Read about the Grand Opening here) so I will just say there have always been good reasons to stay the night in Tonopah, and now there’s a great one, right downtown.

Oats Park Arts Center , Fallon. This pleasant little city — home town to Governors Grant Sawyer and Brian Sandoval — is the Churchill County seat, a grown up farm town with a Navy Base next door and this jewel within. This former school building has been transformed into a pleasing collection of galleries and a small theater. It is a setting for exceptional artists, musicians and performers of all kinds. Visit Fallon when you can take in an event and enjoy a hand-made Kirk Robertson martini at the Art Bar. Dine at the Overland, stay overnight, have breakfast at the Courtyard Cafe, and go home still talking about the concert or exhibit of the night before.

Elko, This vivacious little city is in its prime. Mining has sustained the local economy while it continues to evolve beyond its cowtown origins. It’s city enough to have a Home Depot, an Office Max and a Starbucks, and small town enough to have a downtown where people shop in locally-owned stores and conduct business in the professional offices upstairs. The dining and lodgings options are quite cosmopolitan, and the surrounding countryside is rhapsodically beautiful. Even if you don’t get up into the mighty Ruby Mountains (and you should), they shine down on Elko from amongst the clouds, and provide a majestic backdrop. This is an interesting and enjoyable place to visit any time, but add an event and it’s even better.

The Nevada Northern Railway, Ely. “The Ghost Train of Old Ely” as it has been romantically called, has grown into a year around operation. Since the little choo-choo that rattled around the Ramada Express in Laughlin was mothballed, only one other railroad operates through the winter in Nevada: Amtrak. So far as I know, you can’t rent a locomotive from Amtrak, but you can from the Nevada Northern, and you can drive the train yourself. The railroad’s regular schedule offers passengers the authentic experience of early railroading, and the special trains throughout the year make riding the Nevada Northern an event to remember. A class act.

Hotel Nevada, Ely. If I limited this category to one winner the Hotel Nevada might take the prize every year. Guests come back because they love the place. I’ve written about it many times, here, here and here. Go with friends and book the Kennecott Suite if you can, or if it’s just you, ask for the Literary Murder Barely Averted room, #410 Pet-friendly, and extra guest-friendly.

Tahoe House, Virginia City.
This historic lodging house dates back to Virginia City’s early years, and was a hotbed of Copperhead sentiment during the Civil War. Recently restored into a glamorous inn with a balcony overlooking C Street, a private garden in back, a splendid Great Room in between and 16 high-decor Victorian rooms. Near the center of the old city, this grand old structure makes a fine base for exploring what was once the Richest Place on Earth.

The Inn above the Gallery Bar, Elko.
Once upon a time the Clifton Hotel was nine upstairs rooms over Jack’s Bar, next door to Capriola’s in downtown Elko. Now it’s the Gallery Bar, combining fine wine and cocktails with art in a most pleasing way and the upstairs rooms have been tastefully renovated for overnight guests, with bath down the hall, old-country style.

Machi’s, Elko. We try never to leave Elko without a dinner at Machi’s. Hearty and satisfying food prepared with brio.

Socorro’s Burger Hut, Mina. When she stopped cooking at the whorehouse up the road, Soccorro opened this roadside stand where you can get burgers and fries and the best chocolate malt of your life. It’s painted bright red, so you can’t miss it. Don’t pass this one by. 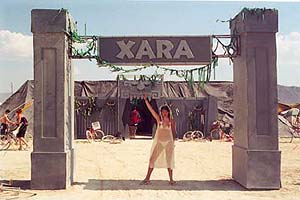 Burning Man, August 27 – September 3 on the Black Rock Desert east of Gerlach.
Once a year, tens of thousands of participants gather in Nevada’s Black Rock Desert to create Black Rock City, dedicated to community, art, self-expression, and self-reliance. They depart one week later, leaving no trace whatsoever. Originally derided as a fringe event of unpalatable hippies, Burning Man has become a major international cultural event. It has become so popular, in fact, that this year there were nearly three times more tickets requested than there were tickets, and event organizers are still struggling to deal with the vexing problem of overwhelming success.