Goldfield Days was an adventure.

We have rich memories of Goldfield.Robin and I were married there. More recently we shared a family outing with three of the sibs, an adventure we all still treasure, and in 2005 I was the Grand Marshal of the Goldfield Days Parade, an honor I haven’t yet got over completely.

You might think that would be the high point of the event for us, but our visit was full of high points. Another one was John and Chris teaming up with a local man named Lucas to enter the 3-on-3 basketball tournament. They trounced a team of game 8th-graders before losing to Kyle and his deadly 3-point shot in the finals.

Shorty’s high point must have been taking Best of Show in the pet parade, (details here).

As you see, Goldfield is in our family DNA.

But the event is so casual, so simple in concept and execution that anyone can enjoy it: eat, drink, shop, and enjoy the unique environment.

We had a great time doing the things you do at Goldfield Days, starting with the the pancake breakfast at the Fire House and continuing through a warm sunny day with the parade, the property auction, hot food, cold drink, historic presentations

in the Court House. Radio Goldfield (89.1 fm) toured the town with an atv and big speakers spraying music into the air (including family favorite “My Ding-a-Ling”) and Alan Metscher presided over a highly enjoyable Bus Tour of the old city.

Alan is one of the three famous Metscher brothers from Tonopah, mainstays of the Highway Department there for many years and steeped in the lore of this fabulous region. “My brothers, when they retired, they wanted the city life and moved to Reno. I wanted a quieter place than Tonopah, so I moved to Goldfield.”

He showed a school bus full of visitors the path of the great flood of 1913 and the area burnt in the great fire ten years later. His tales sometimes began “Legend has it that. . . .” That is not a quibble, a place’s legends help to define it, I mention it to indicate that he did not permit the facts to stand naked and alone in his presentation, but coiffed them and shod them and put feathers in their hats to show them at their best.

Underneath these traditional enjoyments there was a subcurrent of anticipation throughout the day: the president of the Chamber of Commerce had promised to set a school bus on fire that night.

visible from the highway south of town. Chad is an artist and creative spirit who was inspired by his vision of Goldfield to become a candidate for president of the Chamber. Once elected he was further inspired to add an “End of the World” party to the Saturday night schedule.

He envisioned 7 bands, at least 100 people camping out ($25 donation, kids free), “only a 10 minute walk from the festivities of Goldfield Days” and he asked campers to leave their guns in the car. “It’s really turning out to be the party of the year,” he enthused. “We’ve got a hand full of bands playing our stage and people coming from all around the region to be here.

One band is coming all the way from Portland, OR. We’re calling it the End of the World Party (the FAR END)”

we couldn’t find anyone around except other visitors gazing in wonder on the decorated/desolated landscape as a magnificent sunset began to create itself in the western sky.

“It was fun but not at all what we’d expected,” a crestfallen Chad explained later, “It was not huge . . . not huge at all. The party just moved to our house, which is right there at the beginning of the Car Forest. Campers stayed in our yard or inside and it was intimate. Bus burnt, did you get to see that?!?”

No, because by then we were back in town enjoying ourselves with some local folks and other visitors and we didn’t want to miss the bed races. On top of that that, it rained sudden and hard — a crashing desert downpour.

I’m aware of all this because Chad has written copiously about the event and its aftermath in emails and in his interesting blog, and I bring it up because in the end Chad gave up the presidency of the Chamber of Commerce but renewed his commitment to Goldfield. A few weeks after the bus burn fiasco Chad organized a Goldfield clean-up day and led a group of 18 volunteers filling trash bags up and down the streets.

“We collected 27 bags of trash and donated 10 pounds of aluminum cans toward the financial goal to restore the Goldfield High School,” he wrote. “So, very proudly, I’d like to thank the town of Goldfield for coming together and seeing this project through to completion. Let’s keep this energy going!”

I’m tempted to think he has made a kind of journey, going from the spectacular to the mundane, from burning buses to picking up trash off the street, from “Hey, look at me” to “Here, let me help.” Kinda cool.

Quick notes from beyond the mountains: The feds have put up a new website detailing recreation opportunities on public land. It urges visitors to “Discover the best American experiences, from the majestic outdoors to important historical and cultural landmarks. Get inspired to explore America!” It looks like a terrific resource, and Nevada is well represented. . . The Nevada Wild Fest is coming to the Rio All-Suite Hotel & Casino in Las Vegas October 25th – 28th. Southern Nevada’s Music Festival & Fair

is bringing in the biggest State Fair Carnival Experience to the Las Vegas valley, with over 35 large format carnival rides, daily celebrity meet & greets, a free festival music stage featuring KWNR’s hottest country acts, Blood Village’s Haunted Maze, Vegas’ best gourmet food trucks and food vendors, beer and wine gardens, the world’s largest sling-shot, and specialty arts, crafts and retail vendors. All net proceeds from this event are donated to the Lili Claire Foundation to help special needs children with free programs and services at the UNLV School of Medicine. Cost is $9 for adults, $7 for senior citizens & militaryï»¿. Children 3 and under are free . . .

This sounds like fun: pig races in Gardnerville! Thanks to the Corley Ranch on US 395 a short distance south of town, the Douglas County Historical Society will receive the funds from guests participating in the “Pumpkin Patch & Harvest Festival Pig Races” on Sunday, October 14. Races are held at 12 noon, 2 pm and 4 pm. Participating Pigs are: Pumpkin 1, Bacon, Charlotte and Wilbur. Guests purchase ‘I hope You win’ slips ($1 each), and place them in the 14-Years-&-Under bucket or the Adult bucket of their favorite pig. Winners will receive gift certificates. 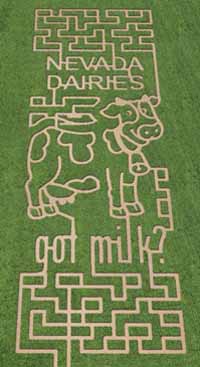 For the convenience of visitors the Nevada Northern Railway Museum has created three brand new lodging packages. Prices range from $99 to $189 including two adult tickets for either the Haunted Ghost Train or the Polar Express plus lodging at the Ramada Inn & Copper Queen Casino, the La Quinta or the Historic Hotel Nevada & Gambling Hall. Packages must be booked directly with the Nevada Northern Railway and are subject to availability. The first Haunted Ghost Train sold out, but there are four more in October: every Saturday night (Oct. 13, 20, 27) plus one Friday (Oct. 26) at 7 pm. Polar Express begins running on November 17 and continues on select dates through Dec. 29. Steam excursions continue on the weekends through Oct. 28: Saturdays at 1 p.m. and Sundays at 9:30 a.m. For more info call 866-40-STEAM or 775-289-2085 . . .

and the Pumpkin Tower Lighting on October 20th at dusk. The Moonlight Mazes will be October 26 & 27. And of course the Country Kitchen will be open for meals and the Old Fashioned Produce Stand will be stocked and ready . . .The Carson Valley CVA, joined at the hip with the Chamber of Commerce for many years, is now enjoying a separate existence and has produced a new logo to proclaim it. After extensive research and discussion the organization selected a soaring eagle beneath the words “Rugged Relaxed, Reachable” . . .

The 2013 Nevada Historical Calendar is now available. Nevada Magazine has produced this expressive calendar for more than 40 years. For $18 (including shipping and handling) it makes a great holiday gift — and why not subscribe to the magazine while you’re at it? You get the calendar, plus a 1-Year (6 issues) Subscription for $29.95. And the mag has announced its annual Photo Contest winners. Check out these gorgeous photographs! They’re one reason the magazine won so many awards, starting with General Excellence, from the Nevada Press Association this year.

Overheard at the John S. Cook Bank building in Goldfield: “Don’t just be yourself. Be someone a little nicer.”