Bound at the Cromwell & Minus5 Ice Bar 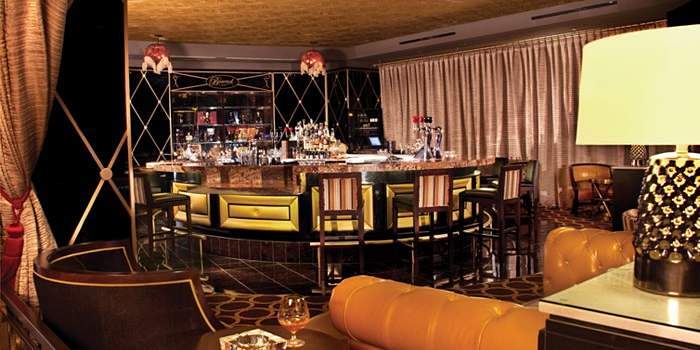 There is always something new to be learned, and I just learned that my properly crafted gin martini isn’t just for the end of my work day. I recently met esteemed mixologist Salvatore Calabrese at Bound at The Cromwell who taught me that martinis are more than a sophisticated 5 p.m. cocktail. Calabrese, one of the world’s most respected bartenders, is best known for his Breakfast Martini. It comes from Salvatore’s wife insisting he eat breakfast. He replied with a gin-based cocktail mixed with the finest orange marmalade, the same topping he uses for his toast. Breakfast is now served at my house at 9 a.m. Bound is open Mon. – Thu. from noon to 3 a.m. and Fri. – Sat. from 10 a.m. to 3 a.m. 702-777-3777. 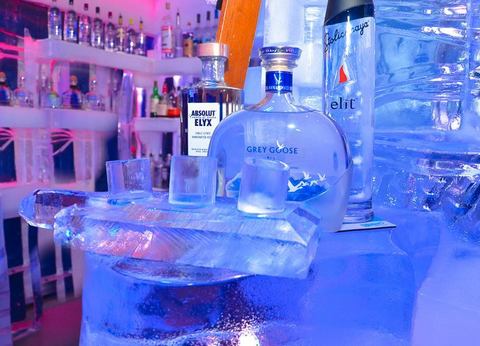 Las Vegas is hot and that’s why Minus5 Ice Bar at The Shoppes at Mandalay Place is so popular. It’s a unique ice-themed experience where guests enjoy vodka cocktails served in a glass made of pure ice, all within the beauty of a -5° Celsius (23° Fahrenheit) ice environment. It begins with donning Minus5 parkas, gloves and boots and entering a frozen room complete with ice walls, an ice bar, ice seating covered with faux fur pelts, ice tables and a variety of ice sculptures.  The 1,300 square-foot frozen venue includes 120 tons of fresh 100% pure Canadian ice and features a state-of-the-art sound and LED light show.  Minus5 opens daily at 11 a.m.  702-740-5800.

Spring and outdoor activities go hand-in-hand in Las Vegas. Just keep in mind that the weather will be hot, sunny, windy, rainy, and have conditions all in between.  It is a good time to prepare for anything!  A few of the great festivals that are on tap this month follow, so, speaking of taps…

The Great Vegas Festival of Beer takes place on Saturday, April 9th in Downtown Las Vegas from 3 p.m. until 7 p.m. Over 400 craft beers from more than 100 breweries will be on hand for consumption with early entry fees of $50 (until April 9th) for entry at 2 p.m. The normal 3 p.m. entry time is $40 in advance or $45 at the gate. And, if you have been reading my columns, you will note that this is similar to the Downtown Brew Fest that was held in October last year. The difference, this time, is there are more breweries and more craft beers from which to choose. The fest also starts earlier than the Octoberfest and, basically, costs the same. Do not miss out on this festival if you are a beer connoisseur!

The 15th Annual Pure Aloha Festival is being held in the parking lot at the Silverton Hotel on Blue Diamond Road between Thursday, April 14 and Sunday, April 17. The schedule is Thursday and Friday from 5 p.m. until 12 a.m. and Saturday and Sunday from noon until 12 a.m. and 10 p.m., respectively. A carnival, live Polynesian entertainment and various food and retail vendors are featured. Admission is only $8 for general admission and $6 for seniors, military and children ages 5-10. You can also purchase $34 tickets for the concerts that begin at 7 p.m.

Come on! Touch-A-Truck! This is the 10th anniversary of the truck touching event at the Orleans in their northwest parking lot at the corner of Cameron & Harmon. You can park in their free parking garage located off of Cameron just north of Tropicana. This is fun for everyone for $6 advance tickets or $8 at the door. It is held on April 2nd from 9:30 a.m. until 3 p.m. You will be able to explore over 100 vehicles from Firetrucks to Bulldozers to Semis to Cement Mixers.  Go blow the horns!

Henderson will be celebrating 63 years of history with their Heritage Parade and Festival on Saturday, April 23 from 10 a.m. until 6 p.m. on Water Street. The event has free admission and includes entertainment, food vendors, a car show, parade and various activities. This is another fun event for the whole family outdoors in, normally, beautiful weather for the Vegas area. 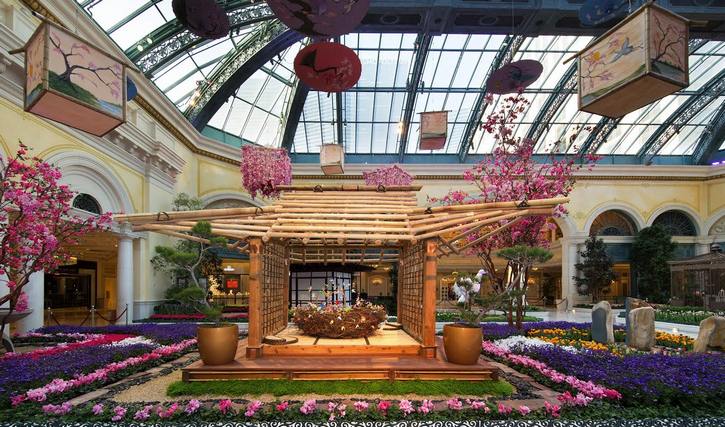 Below the whimsical garden is a sacred scene featuring a 26-foot traditional Japanese Temple sitting on a shore of calming waters that is replicative of the original Golden Pavilion in Kyoto, Japan. Across the shore sits a majestic six-foot topiary crane, made from 2,600 carnations and ostrich feathers. This beautiful display is free to the public 24 hours every day.

Beauty & Essex Will Open in Las Vegas  at The Cosmopolitan

Beauty & Essex opening on May 16 at The Cosmopolitan is a partnership between the TAO Group and acclaimed personality chef and restaurateur Chris Santos. Since opening in 2010, Beauty & Essex has been a popular dining destination on the Lower East Side in New York City. There it is a multi-level restaurant and lounge that revolutionized dining in the neighborhood with Chef Santos’s brand of innovative, communal share plates and stylish design.

Chef Santos has more than 20 years of experience honing his culinary craft as an executive chef in New York City’s hottest restaurants. In 2005, he debuted his restaurant, The Stanton Social. Throughout his career, Santos has appeared as a guest chef on major network shows, been a resident judge on the Food Network’s show “Chopped,” and served as a repeat guest chef at The White House and Camp David. 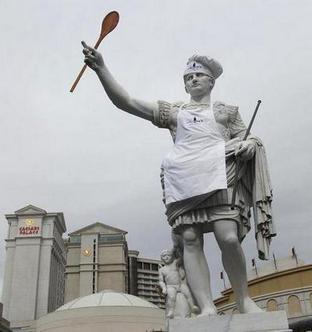 Vegas Uncork’d by Bon Appétit will celebrate its 10th anniversary April 28 – May 1 with extravagant soirees and a world-class lineup of renowned chefs from Caesars Palace, The Cromwell, The Venetian and The Palazzo.

For the first time, Vegas Uncork’d will venture downtown with epicurean revelries, including a Steakhouse Redux at the iconic Golden Steer featuring Michael Mina. There will also be a Mystery Dinner hosted by Emeril Lagasse, at a location to be announced.

New and notable additions to the festival will include After Hours Sake and Sushi, Giada’s Italian Inspired Brunch, Dinner and a Show with Mr Chow, BA Navigator Downtown Tour, a Sensory Lunch at Bacchanal Buffet, Nobu Matsuhisa’s Ultimate Omakase, and the Craft of the Cocktail with Salvatore Calabrese. Tickets are available online.