When Ely lost its main retail store, JC Penney a few years ago, steps had to be taken to provide clothing, shoes and household items for the community. After contacting several retail outlets and having no luck in getting any of them interested in opening a store, the citizens of Ely do what we have always done in the past when faced with a problem – we pulled together and did it ourselves.

Working with other communities who had lost major retail vendors, we learned how to form a cooperative market, sold shares of stock, chose a board of directors, hired staff, and reopened the space stocked with the items we knew were needed here.

The new inventory included work clothes and steel-toed boots for the workers at the local mines, school clothing, shoes for the entire family, and household items like bedding. 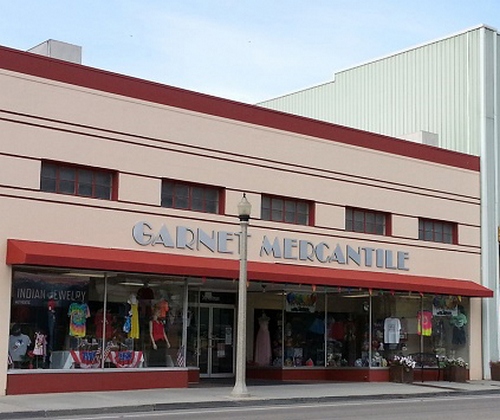 The store has slowly developed and provides needed merchandise. But like elsewhere, competition from the large stores in large cities and internet shopping has taken part of the sales. People like to travel out of town once in a while and shopping is always part of a trip.

So the question became how to keep the Garnet viable and provide for the community. Once again the local citizens stepped up and decided to open space inside the store for entrepreneurs who created unique items to sell. These people are craftsmen who create one of a kind products but do not want to invest the time or money in their own storefront. By providing space to display and sell the products, the people have a place to market. A commission is added to their prices and this amount goes to the Garnet to cover overhead for the entire store. Using this system, the Garnet does not have to purchase all the inventory and the craftsmen don’t have to pay up front for rent, utilities and staff. It is a win-win system for all.

At the present, the Garnet Mercantile provides space for over a dozen small businesses offering a variety of items including Native American jewelry; hand-made soap and lotions from goat milk; jams, honey, salsa and other food products from local suppliers; photography of local scenery and wildlife; hand-made furniture from local woods; local artwork including oil and watercolor paintings; jewelry repair, and many other items.

The Garnet Mercantile now functions as an incubator for small businesses. People can bring in their products or services like photography and have a place to operate without the added expense and complications of their own storefront. As the business grows, the owner learns about marketing, inventory, staffing, and all the other aspects of running a business. When they are ready and want to make the change and feel they have built up enough customers, then they can move on to their own location if they want to. If they prefer the convenience of staying in the Garnet Mercantile, they continue with their products, sometimes taking on added space if needed.

We have had entrepreneurs do both. Some have moved on to their own space and expanded; others remain with the support of the Garnet Mercantile. As some move out, others are eager to move in and have the opportunity to market their products or services.

One example of this expansion is a home-based business that has been here locally for many years now opening a downtown location to offer photo scanning and conversion to digital files for people who want to preserve their old family photos. This home-based business will bring a new service to the store and expand their product line. This is good for everyone.

A catalog of products and services available is in the works and eventually will be featured on the internet to expand marketing possibilities.

By making use of a closed building that sat unoccupied for a few years and turning that space into a new retail opportunity to provide space for entrepreneurs to meet the needs of the community, Ely has regenerated its downtown business area. As people return to shopping in the downtown, other businesses have begun to appear to revitalize the downtown. Losing a main retailer who had been in the community over 90 years could have signaled the end of our downtown. But local citizens took on that challenge and have added new life to our town.