Club Mexicano de Noreste de Nevada invites everyone to come celebrate the 19th annual Cinco de Mayo event on Saturday May 4, 2019. The festivities begin with the annual parade in downtown Elko at 11:00 am and following the parade at 12:00 at the Elko County Fairgrounds. There will be music by Sonifest Entertainment, folkloric dance performances, Mexican food, bounce houses, face painting, photos by Ruby Mountain Photo Booth, various vendors, and more! FMI – https://www.facebook.com/CincodemayoElko/.

You are cordially invited to the most raucous and woolly wild west affair in Elko County. Dress as your favorite silent film bandit, outlaw or villain. Good guys and gals welcome, too! The best costume wins the evening’s grand prize. Enjoy music, libations, appetizers, paella, and a silent auction with the toast of the town.

Every year, Elko commemorate the Halleck Bar, which was donated to the Museum by the Glaser Family and Chach Evans. The stipulation for us to keep the bar is that we must have an annual party and a toast with Beefeater Gin. The Halleck Bar Party is one of Northeastern Nevada Museum’s most important fundraisers. All donations directly support the Museum and its projects. FMI – https://www.elkodowntown.org/event/halleck-bar-party/.

Join the Reno Phil in celebration of the American West. Hear the unveiling of Grammy-nominated composer Zhou Tian’s commissioned work, inspired by the completion of the Transcontinental Railroad – which united the nation and gave new life to the city of Elko. The orchestra will also perform the New World Symphony, garnering its name because Czech composer Dvorak wrote it during the 1890s when exploring the U.S. This concert is sponsored by Barrick, NV Energy and Bill Pearce Motors. $20 General Admission | $10 Youth May 4 @ 7:30 pm – 9:00 pm
Elko Convention Center. 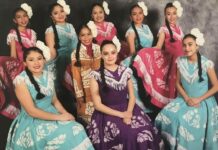