Eat or drink? Eating or drinking? Drinking and eating? Eating and drinking!

Las Vegas is going over the top in May with food and drink festivals: the Springs Preserve Brews & Blues Festival, Vegas Uncork’d, Vegas Unstripped, Lee’s Beer & Tequila Experience, Best Dam BBQ Festival, and the Henderson Art Fair. So much to drink and eat; so little time to do it all! I suggest you stay the month of May in Las Vegas to try to cover everything. Let’s get started!

During the dates of May 9th through the 12th you will find a treasure trove full of experiences to enjoy.  Then, on May 18th you can attend Lee’s Beer & Tequila Experience and wrap up the end of month, Memorial weekend, at the Boulder City Best Dam BBQ Challenge.  This is their 15th annual event, so you know they have everything down pat  — and it’s free to attend! 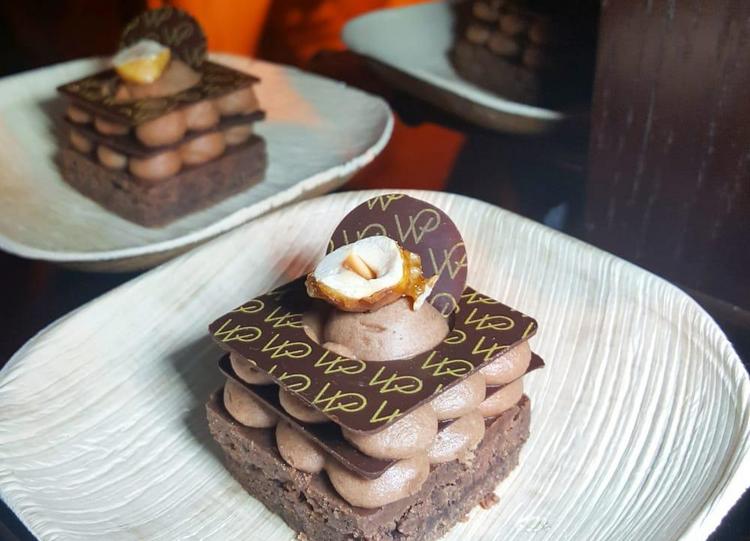 Vegas Uncork’d by Bon Appetit will be held Thursday, May 9th through Saturday, May 12th at Caesar’s Palace, The Wynn, The Venetian Resort, Paris, The Cosmopolitan, The Cromwell and other locations both on and off The Strip.  This is a massive event with ticket prices starting at $150 and ratcheting up depending on the Chef, venue and length of time of the event.  You can enjoy just one event or buy several; it’s all up to you and your budget.

Check out the chefs and personalities list.  As of this writing, there are 40 committed to the experience: Guy Savoy, Julian Serrano, Nobu Matsuhisa, Michael Mina, Gordon Ramsay, Giada De Laurentiis, Lisa Vanderpump, and Simon Bregardis.  Some of these are so popular their event is already sold out and you can sign up to be put on their waiting lists.

There are brunches, a tasting and distillery tour at The Mob Museum, dim sum, a picnic in The Park (MGM), learning the secrets of cooking, autographs, cook book sales, perfect pairings of culinary delights, and unsurpassed drinks and so much more to enjoy.

On Saturday, May 11th Vegas Unstripped will be held for the 2 year Downtown.  Tickets are $78.62 (includes service fee) with the outdoor event beginning at 8 p.m. and running until 1 a.m.  Besides the inventive dishes there will be cocktails, wine, beer, soft drinks and live entertainment included with your ticket purchase.

The difference with this event compared to Vegas Uncork’d is the chefs are from Off-The-Strip locations.  Flock & Fowl, Esthers Kitchen, Momofuku, Metro Pizza, Sparrow & Wolf, The Summit Club, and others will have their chefs or former chefs represented to serve you the best-of-the-rest creations. 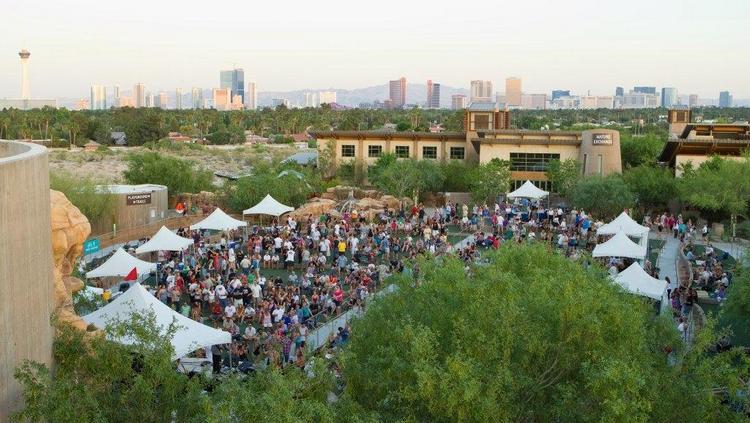 The Springs Preserve is hosting their 10th annual Blues and Brews Festival on Saturday, May 11th from 4 p.m. until 8 p.m.  Designated Drivers have a $15 entry fee with General Admission $35 in advance or $40 at the gate.  There will be a wide variety of brews served from Brooklyn Brewery, Constellation Beer, 21st Amendment, Funkwerks and many others and poured into your free mug as you tent hop.  Live entertainment will be featured along with food vendors.  You can also purchase a VIP ticket which includes an indoor lounge, a reserved outdoor patio and a meal along with additional premium beers to savor. 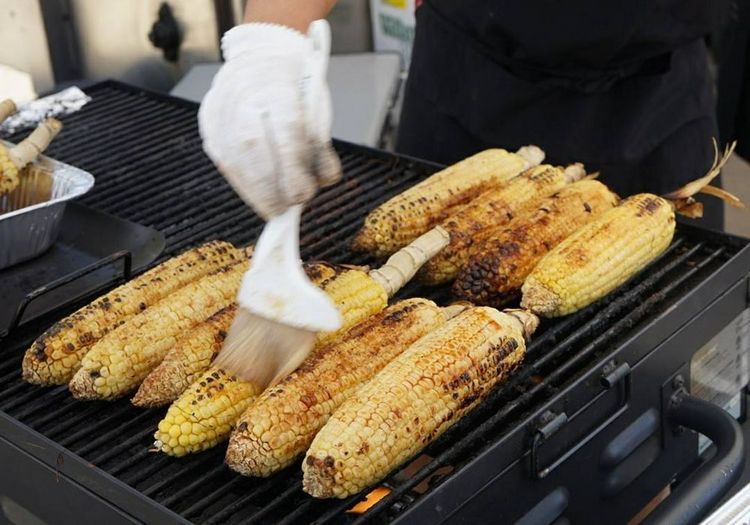 Along with the many international flavors in the outdoor food court you can also enjoy the hundreds of art vendors lining the street and installed inside the buildings at the Art Festival of Henderson on Water Street.  This is a traditional Mothers Day weekend event, held this year on May 11th and 12th, to get you out and moving in the crisp, and sometimes hot, air and to enjoy good food, live entertainment and the many creations by local and national artists.  This is a free event to attend. 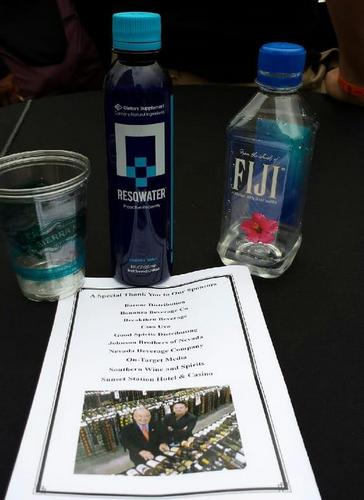 For the 13th year, Lee’s Beer & Tequila Experience will be held on Saturday, May 18th from 4 p.m. until 8 p.m.  If you go to this event, keep in mind that it is drinks, drinks and more drinks.  Besides their 300+ craft beers and 70 tequila varieties, you will find various cocktails served with other spirits for unlimited sampling.  There is also lots and lots of water to keep you going (literally).  It’s a good thing they will have food available for purchase.

If you can avoid driving, by all means do so.  Take Lyft, Uber or a Taxi, which is the only way to go.  This is an event to be savored, and we want you to return next year!

The tickets are $60 if purchased in advance or $70 at the door of the Thomas & Mack Center.  Contact Lee’s to find out if they have a BOGO (buy 1, get 1) on the tickets.  If not, I suggest you go to Groupon for discounted tickets to shave $20-$30 off the price of admission.  Note:  Unless you have an eidetic memory, I would use your phone camera. Bring your camera or even just a small writing tablet that you can jot down the names of those spirits that move you.  This will help you with future purchases if you truly liked a selection that you tried.

The Mob Museum’s newest acquired artifact now on display in The Underground, Prohibition exhibition basement space, is a phone booth from the Four Deuces, a club located in the Levee vice district south of downtown Chicago. 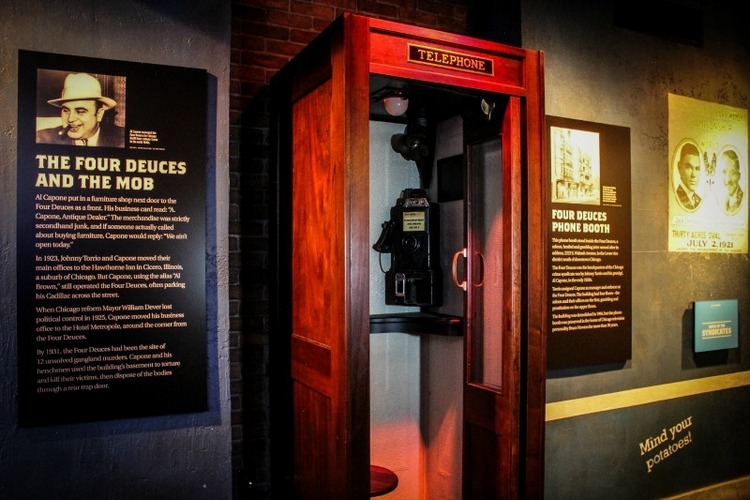 Named after its address, 2222 S. Wabash Avenue, the Four Deuces served as the headquarters of the Chicago Outfit, the crime syndicate run by Johnny Torrio followed by his protégé, Al Capone, in the early 1920s. The building had four floors – the saloon and offices on the first with gambling and prostitution on the upper floors. Capone put in a furniture shop with secondhand junk next door as a front. His business card read: “A. Capone, Antique Dealer.” By 1931, the Four Deuces had been the site of 12 unsolved gangland murders.

The phone booth was removed from the Four Deuces before the building was demolished in 1966 and resided in the home of Chicago television personality Bruce Newton for more than 30 years. 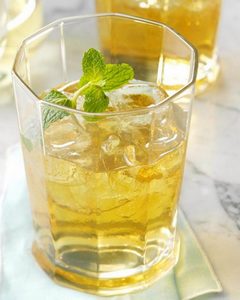 Beer Park at Paris is holding a rooftop viewing party for the 145th annual Kentucky Derby starting at 9 a.m. on Saturday, May 4. A trumpet player will sound the horn to start the races, adding to the fanfare of some of the race day’s favorite traditions, including mint juleps, complimentary champagne, themed decor and Kentucky Hot Brown sandwiches. Beer Park will offer complimentary glasses of Veuve Clicquot Champagne to the first 30 guests who arrive in derby attire and prizes to the guests who correctly guess the winning horse.

With a spin on the Derby tradition, Beer Park will offer a mint julep bar, serving the popular cocktail with mint leaves, powdered sugar and whiskey. 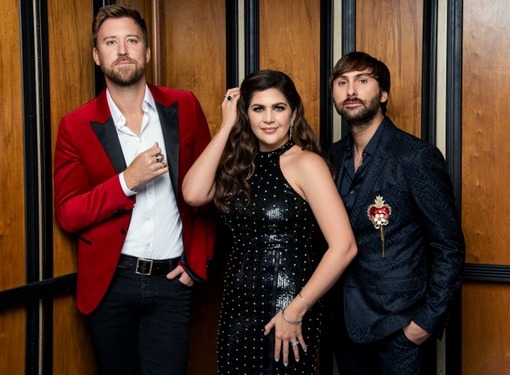 As the first country act to headline the venue, seven-time Grammy award-winning Lady Antebellum will be center stage at the Palms in the Pearl Concert Theater at 9 p.m. on May 10, 11, 15, 17 and 18. With their show “Our Kind Of Vegas,” this is the trio’s first-ever Las Vegas-residency. The current CMA “Vocal Group of the Year” nominee Lady Antebellum present their chart-topping songs bringing Nashville to Sin City with stripped-down performances each night that will often feature the songwriters behind the group’s fan-favorite hits. Tickets start at $34.95. 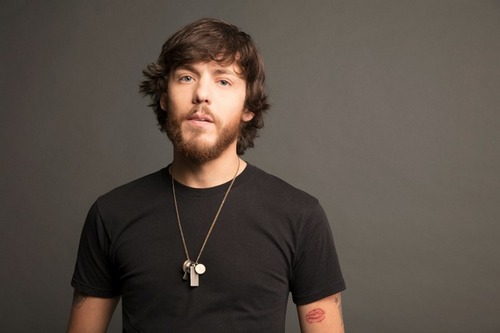 Chris Janson with special guest Jordan Davis will headline the Sunset Amphitheater on Friday, May 31 at 6 p.m. Tickets are $20 to $45.

Warner Music Nashville’s Chris Janson, a viral hitmaker and Grand Ole Opry fixture, released his second album “Everybody.” He’s been straddling the divide between country’s past and future. Artists as diverse as Tim McGraw, Hank Williams Jr., Justin Moore, LoCash and many others have been recording his songs. But now, coming off the career-defining success of his Platinum certified get-rich smash “Buy Me a Boat” and its Top 5 album of the same name, Janson’s turning his creativity loose.