There is nothing like a beautiful spring like day in Nevada. The azure blue skies set off the brilliant white snow capped peaks of the surrounding mountains. The ground was littered with wildflowers making a brief but showy presence before the heat and dry of summer sets in. Everything just seemed . . . clean. 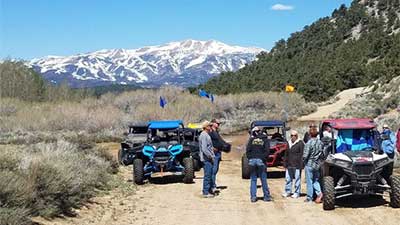 In mid May, I hastily organized a day ride.  I have written before about the “MBA” ride meaning Masonic, Bodie and Aurora. After doing some map work, I decided to do just the first leg and see where it would go from there.
We met at our usual jumping off spot near the East Walker River. The river, brown and turbid, was running swiftly under the bridge as we passed over.
There were 8 rigs on this day trip — people were anxious to get out.

I knew that we were not going much past Masonic as the snows of winter were still hanging on and major portions of the road would be impassable.

Upon reaching Masonic, the scenery was spectacular.  Across the valley to the west sits the Sweetwater Mountains still in its’ winter cloak.  We tarried here for a bit taking pictures, enjoying the late morning sun’s warmth and doing what we do best . . . talking. 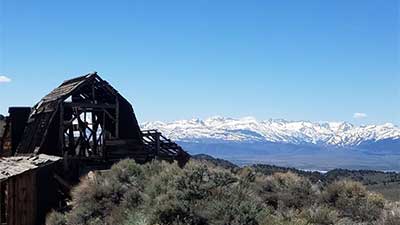 Upon leaving Masonic, we decided to take a short detour to the Chemung Mine.  The Chemung overlooks the Bridgeport Valley and the southern Sierras.  As we approached the Chemung, the glades of aspen were just starting to turn a pale green in preparation for full bloom. At the Chemung, more talking and more picture taking..after all, we had all day!
I had two alternate routes out configured on my GPS , both of them taking us east and back on to the main Walker River Road.  The preferred alternate required us to head a little more toward Bodie before turning east.  As we started to zig up a grade, the zag was full of snow.  We knew that this was the end of the line because there would be more zigs full snow as well as the zags too. 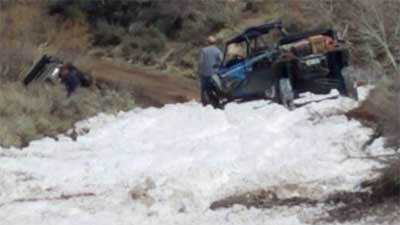 I put my rig in four wheel drive and put the coals to it.  Slipping, sliding and throwing wet snow everywhere, I made it to the next dry spot.
Well, if I could make it so could the rest.  It was a lot of fun to hear the screams of laughter from the drivers and their passengers as they hit this stretch.

Everybody made it . . . save one. He, unfortunately, laid his rig on its side. No physical harm to man, woman nor machine, but I do think there was a damaged ego in there. 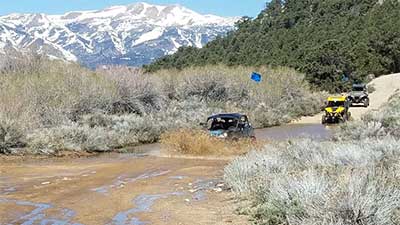 Back down the mountain we went and went in search of alternate two.  It took us a couple of tries to find the correct road but find it we did.  Although I have explored that country fairly well, I had never been on this road. It took us up, down, and around canyons.
It brought us past a few old mine sites..with buildings..that I had never seen before. It had twisties and some rocky sections and then led us across a flat and dumped us on the Walker River road not far west of the area known as “The Elbow”. 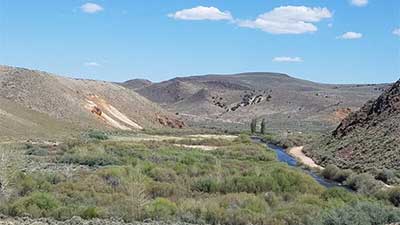 About ten miles past the Elbow sits the Nine Mile Ranch.  The two story block building at the historic ranch was severely damaged by an earthquake in 2017.
I was at the ranch a few days later to survey the damage which was extensive; the whole west wall was pretty much in rubble and other walls were damaged too.  It looked bad for this old house.  The quake’s epicenter was right under this spot.  There were even cracks in the ground in the barnyard.  Not a good sign. 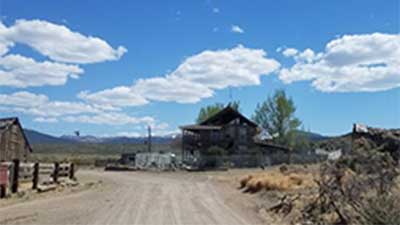 A few years ago, the Nine Mile was acquired by the State of Nevada and now is part of its newest state park complex.
The house is completely surrounded by a tall chain link fence and a ‘seasonal’ caretaker lives on site.  In talking with him, he said that the state would like to restore this old building but money is an issue.  Yes it is…it will be no easy feat to put this old house back together again.

From there, we headed back to the trucks and loaded up and headed for Wellington for a picon or two at the Heyday Inn — and maybe even dinner! 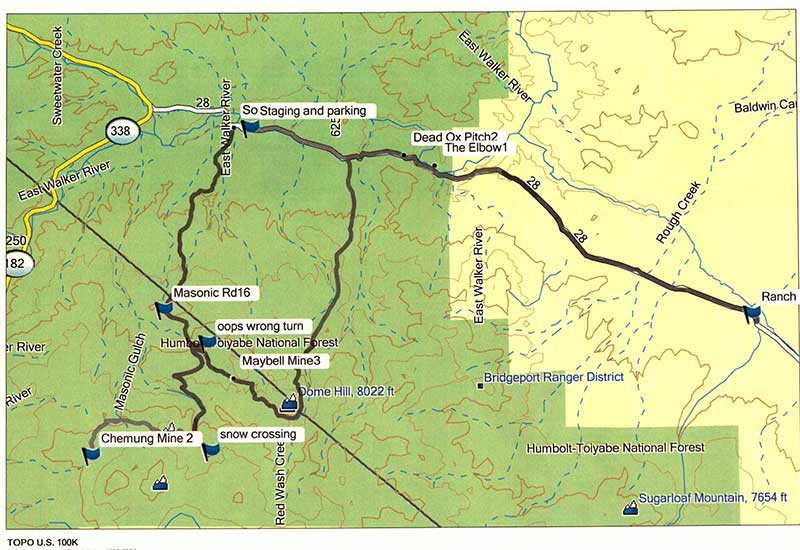 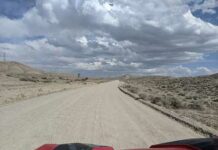