Early in the week of May 3, persons unknown erected a sign near the junction of Main Street, Silver City (Highway 342), with the Truck Route (Highway 341) blaming Comstock Mining Inc., the Storey County Commissioners and the Nevada Department of Transportation for the closure of the highway (342) between Silver City and Gold Hill. 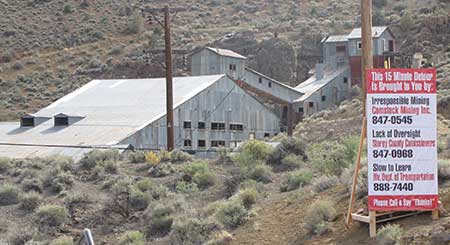 On the morning of the third day afterward, the sign was obliterated and removed by a second party of persons unknown.

For erecting the sign without a permit, public opinion assigns responsibility to critics of pit mining in the Virginia City National Historic Landmark.

For trespassing on private property and destroying someone else’s belongings, suspicion is divided.

Could it have been NDOT, stung by the suggestion (“Slow to Learn”) that putting a highway over a mine shaft isn’t smart? This was the fifth or sixth collapse in that location. . . .

It’s comical to think of Lance Gilman, Marshall McBride and Jack McGuffey scuffling around in the sagebrush to bring down the aspersion against them and their predecessors (“Lack of Oversight”). This seems to suggest the collapse could have been prevented if they’d paid some attention. But how likely is it that even one of them would break the law outside Storey County?

I guess we’ll never know who did it . . . just another unsolved petty crime. The highway reopened Tuesday June 2.

The previous Update presented an overview of the way Nevada oversees and fails to oversee mining in the state. The state’s Comstock Historic District Commission was inadvertently omitted. That’s partly because its purview is local to the Comstock Historic District itself, and even there it has really nothing to say about the wholesale destruction of the canyon. It can insist you build your house a certain way, and can prevent you from painting it a certain color, but it can’t stop you from digging an immense crater and changing the character of the place forever.

This flaccid organ of state government is the legacy of Ron James, who spent 30 years in charge of the state’s Historic Preservation office in Carson City.

Upon his retirement from the state Ron was hired by CMI as Director of the company’s captive Comstock Foundation for History and Culture to help mask the threat to the Landmark. Once again Ron was handing out other people’s money, but this time he was also personally helping with the ruin the Landmark.

One transaction that perplexes observers not privy to the inner workings of the Foundation is its purchase of Donovan’s Mill in Silver City. CMI executive Scott Jolcover bought the mill from Mike Donovan’s estate for something over $50,000. Despite its undisputed historic value the mill was locally considered a financial liability because of its Mercury Superfund status. But in September 2014 the Foundation paid Jolcover $350,000 for the property — and shortly afterward listed it for sale again at $395,000. Did something just happen there?

Now Ron has retired yet again, giving everyone another chance to wish him a heart-felt Goodbye. He is replaced by Pam Abercrombie who seems eager to  assume his position.

On October 20, 2010, the Company exchanged all of its senior secured convertible and senior indebtedness owed to members of the Winfield Group, shareholders of the Company, for newly created Series A-1 preferred stock. As part of the exchange, the Company agreed to indemnify the Winfield Group for any amounts as part of the exchange that were determined to be taxable as ordinary income to each member of the Winfield Group. As a result of this transaction, the Company recorded an accrual loss contingency provision in 2010. In September 2014, a portion of the indemnity lapsed. In March 2015, the remaining portion of the indemnity has lapsed, and accordingly, the Company recognized a reduction in the loss contingency accrual of approximately $3.2 million, which is included in other income in the condensed consolidated statements of operations.

The accounting adjustment aside, the company lost $1,673,168 in actual money.