Home Features A Brief History of Lincoln County
Facebook
Twitter
Pinterest
WhatsApp
By Dave Maxwell
Visit Lincoln County this summer. It’s worth it. Part of Nevada’s Silver Trails Territory, it definitely fits that description.
In 1849, during the great Western migration, a party from Kansas seeking a shorter way from Salt Lake to California crossed through present day Lincoln County. They had the misfortune of stumbling into Death Valley without adequate food and water and all perished.
These were not the first travelers to come through the area, though. Some of the Mountain Men and trappers of note, along with nameless others, had also been here, however briefly. Spanish explorers in the 1500’s are believed to have gone through parts of Nevada and maybe even a little bit of Lincoln County.
Thus, the area was not unknown, but little visited, even before it was created as a County in and of itself on Feb. 26, 1866. Just a couple of years before that, in the winter of 1863-64, while the Civil War was raging in the east, William Hamlin was told by an Indian who traded some information for food, about the famous Panaca Ledge.
A few miners came, while in the meantime, Brigham Young learned of this area, and in efforts to expand the Mormon community into other parts, encouraged a group from the present day St. George, Utah area to go and settle. In May 1864, the Francis Lee family and several others, came to the Meadow Valley and established the town of Panaca.
Nevada’s first Governor was H.G. Blasdel. He visited Lincoln County himself, but his trip from Carson City was so plagued with hardships, historians say the group had to exist for a time on lizards they could catch, and one member died.
Lincoln County’s first seat of government was designated at Crystal Springs, but since there was hardly anything there, except a small Paiute village and a few settlers, it soon shifted to Hiko on March 18, 1867. A few years later, on February 24, 1871, the county seat was moved to Pioche, where it remains today. 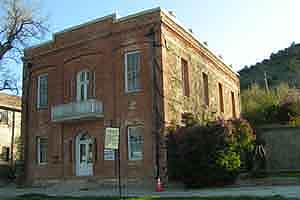 One of the most notable buildings in Pioche is the famed Million Dollar Courthouse, a two-story red brick structure built in 1871 at a cost of only $75,000. The story in itself is quite interesting. The base price should have been only about $30,000, because the actual contracts called for $16,400 for the courthouse and $10,000 for the jail.
Broken contracts, corrupt officials, and many other issues eventually brought the price for the building when the last obligations were finally paid for in 1937 to over $1 million, an extremely exorbitant price for its time. 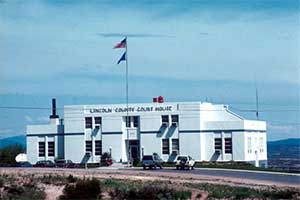 A more modern  courthouse opened in 1938, and is still in use.
Another building is the Thompson Opera House. Built in 1873, it is only of one three Old West Opera Houses still in use in the state.
Pioche in the 1870s was the toughest town in the west, about a decade before Tombstone, Arizona, gained the same reputation. The town, and several others in the County, were little better than they had to be and all of that resulted in numerous killings, with most of the defendants not being punished at all. Murderers were acquitted regularly or else their deeds were not investigated very well and more often than not, justifiable. One historian even commented, “even with a nolle prosequi (do not prosecute) thrown in for good measure.”
There was one exception of particular note. The case of Perry Fuller, who was sentenced to 15 years for killing Fannie Peterson, his one-time common law wife on July 12, 1872. It was considered an “ungentlemanly deed.”

Pioche was named for F.L.A. Pioche, a Frenchman and San Francisco based mining entrepreneur. Poiche never visited the town that wears his name, but since he owned quite a bit of the mining interests in the area, the residents decided to name the town after him. He later committed suicide in 1872. Some have said he might have been overcome with grief as France lost the Franco-Prussian War that year.

Further to the south, the community of Alamo was first settled in the 1860s by the Sharp family and later the Richard family, as well as others like the Stewarts. An early Mormon community that became an established town in 1901, it now attracts many to the fishing and duck hunting opportunities at the Pahranagat lakes and visitors to the national wildlife refuge at the same location. A new visitors center was just opened this year.
Today, Alamo lies on U.S. 93, a major commercial truck route and “snowbirds”, heading south for the winter, and home again in the spring.
A Nevada Historical sign just outside of Alamo notes that the valley, right after the Civil War, was a hideout haven for cattle rustlers. One writer said on a ride through the valley one day, he counted at least 350 different brands.
Caliente was famous for the railroad that lasted as a major route from L.A. to Chicago until the mid-1970s.. The beautiful 1923 Spanish-style former railroad depot that now serves as City Hall, the community library and art gallery, plus a few other offices. Railroad Row, homes built for one time railroad employees, and still lived in by private families, is a noted attraction. A few years ago, Caliente was designated in a special ceremony by the Union Pacific Railroad as an official Railroad City.
Ghost towns from the mining days of the Old West include Tempiute, Logan City, Delamar, Bullionville, Bristol City, Highland and Atlanta. The spectacular Cathedral Gorge State Park, along with Beaver Dam State Park and Kershaw-Ryan State Park, attract many visitors to the area annually.
―advertisement―