The fiasco of the Lucerne Pit is a good example of what’s wrong with the way government monitors mining in Nevada. We can thank Comstock Mining Inc. for that, if for nothing else; if CMI weren’t such a brazen scofflaw, we wouldn’t see the problem as clearly as we do. 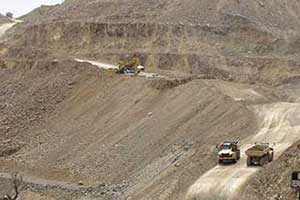 It is almost impossible for our public servants to bring this rogue to account because no one agency — other than the County Commissioners — can oversee the entire operation of a mine.

The mission of MSATS (the state’s Mining Safety & Training Section) is to establish and determine mine operator compliance with state and federal regulations and assist them in meeting compliance. Beyond that, it sees nothing. Or rather, we don’t know what it sees because nothing registers except the extent of compliance with state and federal regulations. If the mine complies in that respect, it can collapse highways at will as far as MSATS is concerned.

MSHA (the federal Mining Safety and Health Administration) received two recent hazardous condition complaints about CMI’s Lucerne pit, one in February and one in March. CMI has been charged with five violations at the pit as a result of these investigations, although their fines have not been levied yet, and some investigations are still ongoing.

But MSHA’s area of responsibility is employee safety, period. It has no authority over community issues or the roadway and no interest in them either. If it finds employee safety violations MSHA is all over it, otherwise, if it notices any other violations it keeps mum.

MOAC is the state’s Mining Oversight and Accountability Commission. It was created to be a single administrative body overseeing the activities of the various state agencies that have responsibility for the taxation, operation, safety and environmental regulation of mines and mining in Nevada. The Commission also identifies particular state entities that are subject to its supervision with respect to their activities related to mines and mining. It consists of seven members serving 2-year terms, appointed by the Governor.

It was established because mining companies weren’t paying taxes, weren’t even being audited, and it operates as a part of the Nevada Department of Taxation despite its additional areas of responsibility beyond the fiscal. But it has no authority to impose penalties for infractions, and apart from getting important information ‘on the record’ there’s not much it can do about them on its own.

NDOT (Nevada Department of Transportation) has responsibility for the roadway, but no authority over pit mines, and no apparent interest in them even when they are being dug dangerously near the roadway it’s responsible for. So when MSHA cites CMI for violations, it feels no compulsion to notify NDOT about it, and NDOT isn’t interested in hearing about it anyway. CMI has been cited for five violations by MSHA, but isn’t required to notify anyone about it, and won’t until it can think up a positive spin to put on it.

NDOT says, “We at NDOT have prescriptive rights solely to operate the roadway, but do not own any of the land next to or beneath State Route 342. Because it is not our land, we do not have any jurisdiction to view or review or approve or disapprove any land use such as Comstock mining operations.”

So even if NDOT had noticed the pit encroaching on the well-known fragile area near the roadway, it would not have occurred to them to mention it to anyone because it is none of their business.

Whose business is it then?

Commissioners Hess and Kershaw were termed out, and Commissioner Sjolvangen was voted out, but the three current Commissioners are carrying on the torrid romance with Corrado De Gasperis and CMI that the first three began. When the road caved in, they paraded down to the site and pledged that the road would be restored asap.

And that was that. The road is still closed, and so is Doodads, while CMI is happily hauling dirt. Visitors and commuters to and from the south are forced to use the unwelcoming Truck Route, built for the slow, heavy — and sparse — truck traffic of the 1930s, instead of the historic Main Street through Silver City and Gold Hill.

This meets Mr. De Gasperis’ definition of a ‘win-win-win situation’ as expressed in a recent interview:

“SR-342 was built on loose fill and eroded from weather events to the point that it needs to be re-routed. We will move the road as we were planning on doing anyway, but it will help the State, help the County and accelerate many of our business and reclamation plans. Classic win-win-win.”

Imagine that! The road collapsed because of bad weather! And everyone wins except the people who depend on the highway.

CMI has managed to stay in business — which is strip mining the Virginia City National Historic Landmark — despite its unprofitability because Storey County officials have bent and broken the rules to allow it. Let’s see how they handle this pathetic episode.