This Update was prompted by Comstock Mining Inc annual meeting held at the Gold Hill Hotel on June 1.

Those of us who live on the Comstock know how rich our communities are in what matters most: friendships, co-operation, love and respect for our neighbors.

That’s why CMI’s presence here struck such a sour note from the beginning. Our corporate neighbor for the past 7 years has never shown respect for its neighbors and has yet to make a friend. CMI is an intruder, a self-serving braggart that has imposed its disruptive heavy industry on our peaceful towns over the protests and resistance of the local residents.

CMI never earned our trust. Instead it has wooed the County Commissioners in Lyon and Storey Counties, persuading them to ignore the local residents in favor of the mining industry’s gaudy promises.

Clandestine meetings with some Lyon County Commissioners and the Commissioners’ subsequent votes hare resulted in two lawsuits now before the Supreme Court. In Storey County the County Manager in a public meeting announced Storey County would no longer enforce the company’s long-standing Special Use Permit so that it could then run haul trucks on the public highway. Ore trucks on the road we all use every day!

If Storey County’s officials had lived up to its commitment to the public, that could have been the end of CMI’s sad story. But that is not the Storey County way.

Instead, the landscape above Devil’s Gate has been ripped away and the pit was dug deeper and deeper — until the fragile east wall collapsed and the highway fell into it. After all this, at a cost of $200,000,000 of investors’ money, the company still hadn’t made a dime. 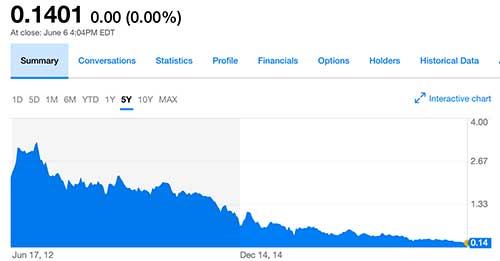 In September 2012 CMI share price was $3.27. On May 25th 2017 the stock opened at 17 cents and the mail brought a notice from the SEC: “The Company’s securities have been selling at or below $0.20 per share since April 27, 2017, and, pursuant to Section 1003(f)(v) the Company’s continued listing is predicated on demonstrating sustained price improvement or effecting a reverse stock split within the next six month period, that is, no later than November 27, 2017. The Company is required to stay in contact with the NYSE and discuss any new developments, regarding progress on its strategy, plans for implementing a reverse split or otherwise.”

The company’s annual meeting was held June 1 at the Gold Hill Hotel (on the market for $900,000, reduced from $1.4 million; the company is peddling the properties it was buying up as the stock was on its way down) and the SEC Notice was announced. Also in the Notice: “The Company’s common stock will continue to trade under the symbol ‘LODE’, but will have an added designation of ‘BC’ to indicate that the Company is below compliance with this NYSE MKT’s listing standard.”

BC are the NYSE’s scarlet letters, and CMI shares are wearing them now. Here’s the company’s filing.

It’s not just the locals who are glad to see CMI go down. Reaction on the Yahoo message board has been scathing:

“I can’t believe there are still suckers here posting on the LODE/GSPG board and still buying this #$%$” Skull Krusher posted. “Gold is a great investment and there are many great mining companies but unfortunately for you all, LODE is certainly not one of them. The BS this company has put forth over the past 10 years is incredible but I guess there is a sucker born every minute. The CEO De Gasperis has not provided any increase to shareholder value since he’s been here. How does a CEO stay on board for so long under these conditions? He’s a well trained financial manager and that’s his value to Winfield because he is adept at keeping the financial engineering going.It’s not about mining for gold. It’s about mining your pocketbooks.”

From the previous week:
“Watch what happens now. leading up to the sure to come reverse split, the pps will probably be manipulated higher and higher. shareholder value and share price are now at all time low.”

“what a week! just when you didn’t think things could get worse, it does. and management just sits back and picks up paychecks and no worries about pps or the shareholders.”

CMI’s golden promises have proven empty, its pretenses and posturings recognized for what they are. Its death rattles will no doubt continue for a while. Will it carry out the reverse stock split to pump up the share price? Probably, since that will prolong the struggle — and the paychecks for company executives will continue uninterrupted as long as there’s a dollar left in the till.