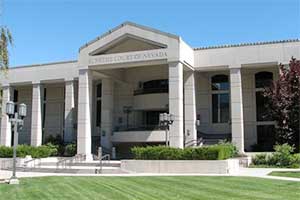 Comstock Residents Association won a decision at the Nevada Supreme Court on December 11. One part of the complaint against Lyon County and CMI in District Court was that Silver City et al. were denied due process because Lyon County Commissioners Hastings and Keller did not recuse themselves from the decision to allow open pit mining within the town limits of Silver City.

The grounds for recusal were CMI’s inordinately large political contribution ($27,000) to Hastings, and the fact that Keller’s husband worked for the CMI foundation.

Judge Estes’ original ruling in District Court was a summary judgement against CRA. In his opinion there was not enough evidence to even bother arguing the claim. Now CRA’s appeal to the Nevada Supreme Court has succeeded, Judge Estes has been overruled and the issue has been sent back to District Court.

CMI and the County once again asked for a summary judgement in their favor, which was denied. Judge Estes is now preparing to conduct a full hearing on the complaint, involving serious preparation, discovery, depositions, etc. This was a major setback and disappointment to CMI and Lyon County.

Judge Estes set a deadline of March 15, so CRA is “all hands on deck” preparing the court case to back up the charge. As former Silver City Town Advisory Board Chairman Erich Obermayr observed, “We are the proverbial dogs who just spent four years chasing a car — and now we caught it! This is both a challenge and an opportunity.”