Interesting Things to Do and Places to See in February

February may very well be the quietest month of the year to visit Baker. That can be a good thing, with little traffic, plenty of hotel rooms, beautiful winter light, and lots of clean air. Tours of Lehman Caves at Great Basin National Park are offered every day at 1 pm, with additional tours at 9 am on Saturdays and Sundays. You can borrow snow shoes from the Lehman Caves Visitor Center and check out Baker or Lehman Creek trails in solitude. Call 775-234-7331 for more information.

While snow coats most of the higher elevations, some sights at lower elevations are easily accessible.

The Baker Archeological Site, just a couple miles to the north of Baker (follow the signs), preserves a Fremont Indian village that was occupied from 1220 to 1295 A.D. A booklet gives you details along the self-guided 1/4-mile trail about what the Indians ate, how they lived, and how they may have oriented their village with the stars and other celestial objects to help them time when to plant and harvest their crops. You can see where the buildings existed due to some curbs that were constructed in 2002. 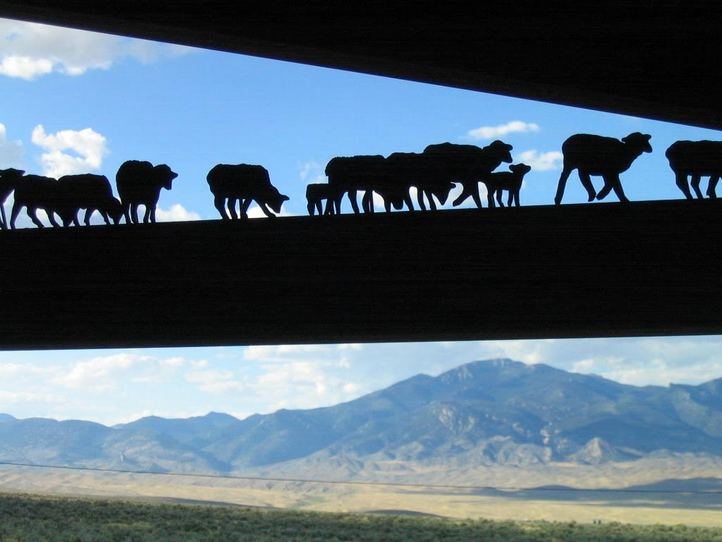 Another easy stop is off Highway 488, half-way between Baker and the Park, where a Ranching exhibit explains the fields and meadows seen in the valley below. The informative signs are located under a metal shelter, with benches for relaxing. In addition, some beautiful metalwork by Bill and Kathy Rountree grace one side of the shelter, providing a beautiful frame for the North Snake Range. 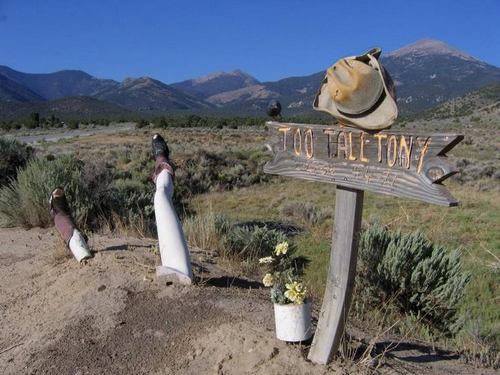 More art can be seen along Highway 488. This road art was originally installed by a retiree as “Post Impression Art.” Including works such as “Too Tall Tony,” whose legs don’t quite stay in his grave, the artwork along the road posts often contain tongue-in-cheek humor. See if you can figure out the jokes involved. One notable piece is the newly installed “Wheel-er Peak,” a peak of bicycle wheels with aliens made out of bike seats peering around. (Photo below)

Continuing on the alien theme is an alien hanging out in his wheelchair. (Bonus: there’s a geocache near this site.) If you like the otherworldly, see if you can spot the eight planets and five dwarf planets that are spaced out to scale. (Hint, the last dwarf planet is on the other side of the road from the rest). 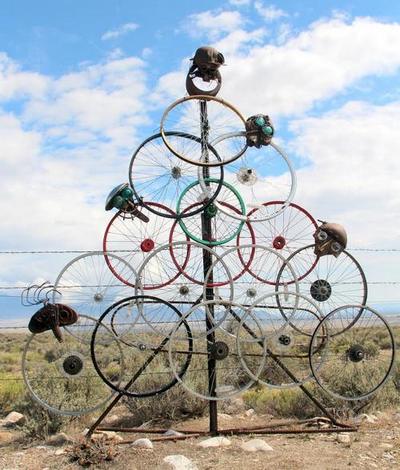 While sheep herders, sheep owners, trappers, and others associated with the sheep industry were making their way towards the Border Inn in Baker on Friday, January 15, for the annual Sheepherders’ Gathering, performers Sourdough Slim and Robert Armstrong headed to the local school to show off their talents. Students delighted in the variety of musical instruments, including a musical saw, and the antics the two shared.

A few hours later, after the Sheep Industry Appreciation Dinner, the yodeling cowboy and his sidekick were back on stage at the Open Mic program at the Border Inn. The Open Mic program is my favorite part of the weekend, as you never know what you might hear. Over a dozen people got up and shared stories that included glimpses of life as a sheep herder, jokes played, a young girl’s fond remembrances of visiting sheepherders in their camps to eat stacks of sourdough pancakes (“they even had butter and honey for them at the beginning of the month”), and much more. Students from Snow College filmed the evening’s entertainment, while their professors shared with the crowd the efforts to transcribe the oral histories collected over the years at the Sheepherders’ Gathering. Meanwhile, Peruvian sheepherders congregated around the pool table, glad to have a change of pace for the night. A few sheep camps dotted the parking lot, making for an easy commute to bed.

The next morning, following a delicious breakfast buffet featuring stacks of sourdough pancakes made by Dave Okelberry, filmmaker Jared Jakins shared his documentary film Ghosts on the Mountain, about migrant workers from Peru and Mexico tending American-owned sheep herds. The film was nominated for a 2014 Emmy Award for Long Form Student Production.

In the afternoon, more music filled the Border Inn’s packed special events room. Sourdough Slim and Robert Armstrong played different songs from their repertoire, and even broke out a couple different instruments, including a bottle. Yep, you can blow in a bottle and make an incredible noise. The audience thoroughly enjoyed the performance and requested a repeat performance of Ghostriders in the Sky to end the program.

Soon after the music it was time for the Basque dinner. Meat was featured prominently, including in the appetizer, soup and main entrees (beef, lamb, and chicken platters). We also feasted on salad, various breads, dessert, and wine. The wine loosened us up so we were ready to dance to music by the Silver Sage band out of Delta, Utah.

The event was well attended, and everyone seemed to enjoy themselves. The idea was dreamt up by Border Inn co-owner Denys Koyle, and the numerous sheep-related decorations in her business are a testament to her dedication to the sheep industry. The Great Basin National Heritage Area Partnership also is a sponsor for the annual gathering. If you’d like to attend next year, save the third weekend in January.