Is that the sun?  It’s so nice to feel the warm embrace of the sun, watch the snow melt, see the flowers bloom and the lake fill up.  It’s always delayed, but it’s spring at Lake Tahoe, and that always puts a smile on my face.  The snow is all but gone at lake level, but it remains in abundance at the upper elevations, which makes for all the various streams and rivers around the basin to be blasting with runoff water. It also combines the two seasons of winter and spring, which makes it double the fun.

The hiking and biking trails are still limited above 7,000 feet because of snow, but the future looks bright with the Forest Service announcing that most of the parks and beaches will be open and ready for business on dates throughout May. Round Hill Pines Beach Resort will open on May 11, and Zephyr Cove Resort is already open, and locals are already getting in their beach time.

In the meantime, if the bike trails aren’t ready, why not turn spectator?  The 2019 Amgen Tour of California will come zooming through town on May 13.  The Men’s Stage 2 from Rancho Cordova to South Lake Tahoe will offer a glimpse of top level athleticism.  Starting at sea level and a gain in elevation of 14,500 feet, cyclists will make their way over two mountain passes on Hwy. 89 over Carson Pass and Luther Pass.  The Amgen tour would make for a nice day of seeing the sights and cyclists hurtling over mountain roads at a breathtaking pace. For more information go to www.tahoesouth.com.

The flip side to spring at Tahoe after a big winter is the winter activities are still available.  The ski resorts will remain open throughout May, with Heavenly Mountain Resort having skiing and snowboarding until Memorial Day.  So, ski in the morning, then when Edgewood Tahoe Golf Course opens on May 17,  go hit a round of golf in the afternoon.  The marinas will also be opening, and that means boating season starts as well.  If you’re feeling extra saucy, go skiing, biking, golfing, and water skiing all in the same day.

On a side note, the bar and grill formerly known as Sam’s Place at Zephyr Cove, which later had a short life as Walley’s Huddle, has a sign in the window announcing that the Blue Lake Tavern will open there soon. Let’s hope the future for this establishment has piping hot pizza and cold beers for everyone. 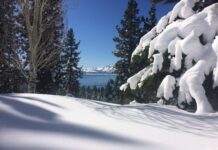