Entertainment is the word at South Lake Tahoe in the month of July.  There’s going to be so much fun going on it will make your head spin and your feet tap.  World class music, a celebrity golf tournament and one of the best firework displays in the country are all on tap to make this a very exciting month at the Lake. 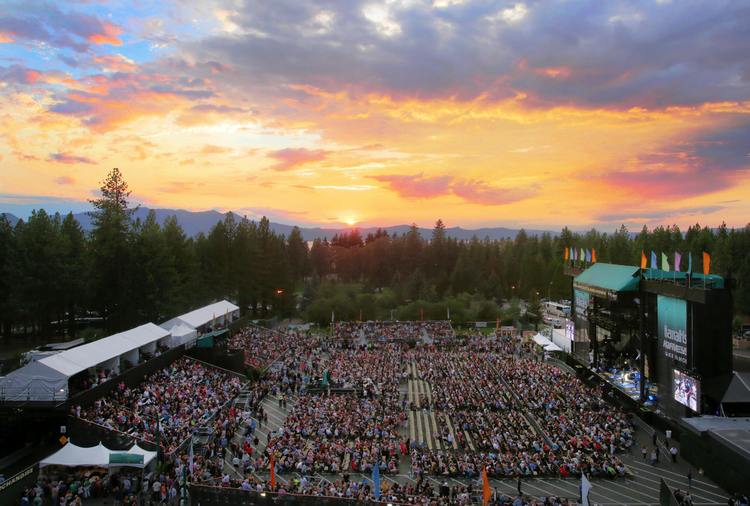 The Concert Series at Harveys is entering its fifteenth season and has become a summertime must go here at the South Shore. Whoever is performing, the venue is a great place to see a show, and when the day slips into night you’re treated to another show with a spectacular Lake Tahoe sunset hanging over the stage.  Even top tier entertainers seem to enjoy performing there because they keep coming back time and time again.  There will be seven acts appearing this month alone, with some of biggest names in classic rock history and some current bands that have huge followings.

Starting off the series at Harveys there will be a whole bunch crazy tunes emanating from the outdoor arena with the music of Slightly Stoopid and their Return of the Red Eye Tour on Saturday, July 2 at 6 pm.  Hailing from San Diego, these guys describe their music as a fusion of folk, rock, reggae, and blues with hip-hop, funk, metal, and punk.  The show starts early, with four bands, SOJA, Zion I, The Grouch, and Eligh hitting the stage before Stoopid.  For sure to be a jamming good time, don’t be afraid to inhale at this show.  Then, on Wednesday, July 7, Widespread Panic will hit the stage for a show that is sure to have you partying and shakin’ your booty.  They are jam band road warriors in the same ilk of the Grateful Dead and Phish, but with Southern Rock influence of the Allman Brothers. 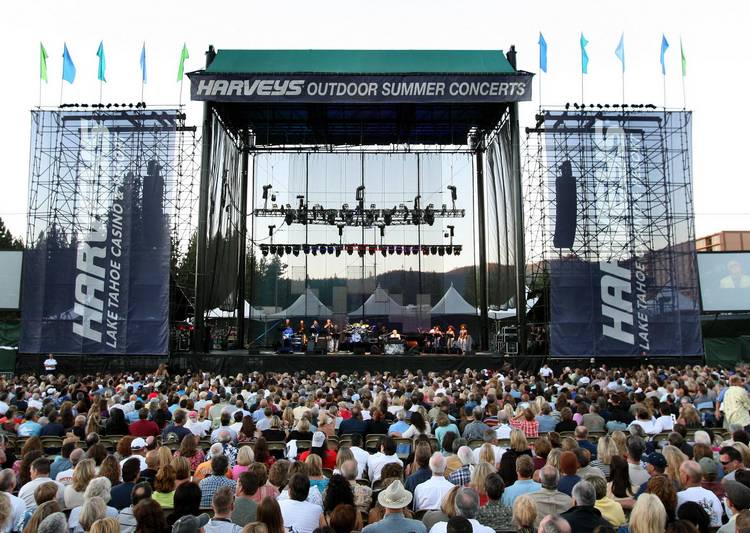 In between those shows of course is our Independence Day, July 4th, and here at Tahoe South we put on one heck of fireworks display.  The Lights on the Lake show, which is shot off from a series of barges directly out from Nevada Beach, was voted in the top five displays in the nation, according to the American Pyrotechnics Association.  The show doesn’t start till 9:45 pm, but the celebration starts early in the day on the beaches of the Lake.  Pick a beach, any beach, and it will be packed with revelers; one must be patient, but the crowds offer a sense of joy, as everyone is trying to have a good time. Zephyr Cove and Nevada Beaches are the most popular, and Round Hill Pines Beach Resort is small and comfortable.  If you live close by, like in the Carson Valley, a quick trip over Spooner Summit or Kingsbury Grade just to see the fireworks is popular too. Pick a vantage point close to Stateline, and you’ll be able enjoy the show.

Back to the music, some big names will be appearing in the middle of the month, and you’ll have a friend in James Taylor, as he sings his seemingly endless array of hits Wednesday, July 13 at 7:30 pm. Sting and Peter Gabriel will be ripping and rocking with their Rock Paper Scissors Tour on Friday, July 15 at 7 pm.  Both Sting and Gabriel will appear together on stage trading off on renditions of each other’s songs and then do solo slots as well.

Then, directly across the street from Harveys and the Stateline casinos at Edgewood Golf Course, the American Century Celebrity Golf Championship will be held, July 19-24.  Sports greats and celebrities combine for some good competitive golf, along with some good laughs and a lot of fun.  Edgewood is a beautiful property, and just strolling around its plush green course in and out of the pine trees is enjoyable too. Take a stroll, watch some golf, sit down on the grass and have lunch, and maybe you can follow Charles Barkley and Kevin Nealon as they make their best attempt at golf while offering great comedy as they make their way around the holes. You’ll definitely  get a chuckle out of their banter.  A great attraction at the tournament is the 17th hole, which is situated right on the beach.  This par 3 is considered the “party hole,” with people jam packed on the beach most of them arriving by boat, cheering on the golfers Happy Gilmore style. “Quiet Please” does not apply here.  The tournament is played Friday through Sunday, but you can attend the practice rounds Wednesday and Thursday for autographs.  Information on tickets at AmericanCenturyChampionship.com.

After the American Century tournament round on Saturday, trade in your golf polo shirts and khaki pants for your cowboy boots and blue jeans. Country star Tim McGraw will perform Saturday night, July 23 at 7:30.  Country shows are usually a spectacle with lots of visual effects, along with plenty of beer. Then, to conclude golf weekend, another heavy hitter of rock n’ roll will belt out the hits, as Don Henley plays a Sunday show July 24 at 8 pm.  Finally, another country star, Keith Urban, will finish off the July lineup at Harveys with two shows, July 27 and July 29.  You can go to Ticketmaster.com for information on tickets.

It’s pretty cool that this small town of Stateline, Nevada will be host to so much big time entertainment in just one month’s time.  But we can all thank that big blue beauty called Lake Tahoe for that.