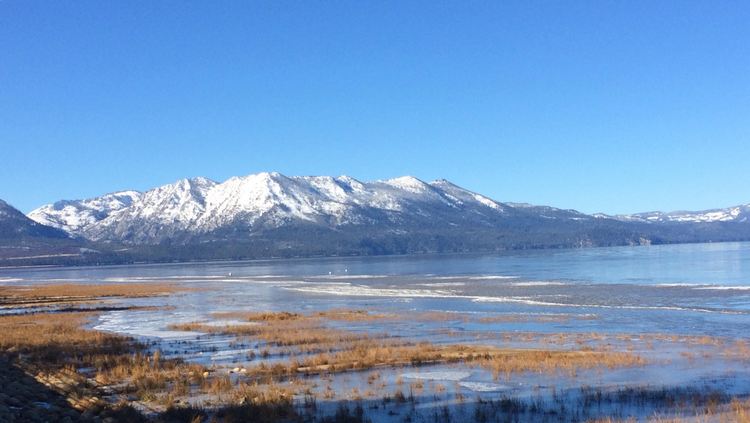 On New Year’s Day a lot of people wake up bleary-eyed and discombobulated from a night of saying goodbye to the old year.  2016 left folks with a sense of uncertainty and confusion about the future, and maybe that’s why we’re so happy when a year is over and a new one can bring a little hope, at least for a little while. Beginning 2017 on a Sunday is a good start; it’s a day of rest, a day of kicking back and easing into things to come.  South Lake Tahoe knows how to party, and all of the Stateline casinos each had a wild shin-dig that had revelers singing and dancing their way into 2017.  But it doesn’t stop with one night at the clubs: the party goes the whole month of January.  Visitors make the trek up into the mountains from the lowlands looking for a wintry good time, inside and outside.

Seeing the look on the faces of people who have never been in the snow is great: even the smallest patch of snow brings joy, especially to children.  Sledding is perhaps one of the nicest and most convenient ways to enjoy a winter day at Lake Tahoe.  And it’s free, except for the price of a sled or inner tube.  Find a hill (Tahoe has a lot of hills) and you’re on your way to an exciting day.  Spooner Summit, at the junction of Hwy 50 and Hwy 28, has a great sledding spot.  Sledders swarm to this very popular snow park.  The adventurous type can trek to the top and give themselves a wild ride, but don’t get caught up with safety if you choose an inner tube, because those can get out of control fast.  Trekking off into the woods isn’t everybody’s cup of tea, so the good people at Edgewood Companies provide a manufactured tubing hill, right in town by Mont Bleu Casino at the adjacent meadow.  Snow cannons blast out the snow even if the sun is shining, as long as the temperature is low enough.  Check off just about all winter fun activities at this one spot. They also have snowmobiling and sleigh rides there in the meadow.

A day of sledding can build up a hearty appetite, and some refueling may be needed after a morning or afternoon of hurtling down a steep sledding slope.  Casey’s An American Cantina is a friendly and casual restaurant located in the Round Hill Center in the township of Zephyr Cove and minutes from the casino corridor.  A great place for locals and tourists alike, it opens at 8am for breakfast and closes when the last patron leaves at night.  Casey’s “Really Good Basic Burgers” are all fresh half pound beef patties from Tahoe’s locally owned Overland Meats. Try the Western Bacon Burger — delish!  Also, Casey’s is dog friendly, providing a watering station for Fido to cool his heels with the rest of the family.

After getting a belly full, go have a belly laugh at the Improv at Harveys.  In a new year, why not start it out with a nice chuckle? It may help you from screaming at the thought of having a game show host as the next president.  The Cabaret Theatre is a cool place to see some great names in stand-up comedy.  Howie Nave is the hilarious host/emcee for all shows, and he alone is enough for the price of admission.  Different comedians are featured every week, Wednesdays through Sundays.  Must be 21 or older to attend.  Call (775) 586-6266 for ticket information.

A night out at the comedy club can be relaxing and therapeutic while preparing for the next day of fun outside on the ski slopes.  The word from the top of the mountain is that the skiing is great, despite the lack of snow at lake level.  All the rain we received here at the Lake in mid-December was all snow at the upper elevations, and not wet “Sierra Cement” but surprisingly good powder, according to longtime local season pass holder and firefighter Patrick Olsen, who lives for fresh “pow” and good turns on the ski runs. Olsen recommends the upper runs, like Dipper and Dipper Woods at Heavenly, as long as the access is limited to the mountain.  As I write this, the lower elevation’s lack of snow has limited The Gondola at Heavenly Village as the only access to the mountain.  But Stagecoach lift on the Nevada side at the top of Kingsbury Grade (Hwy 207) is gearing up and opening soon. [Note: As of Dec. 28, 92 runs and 27 lifts at Heavenly Ski Resort are now OPEN.]

Happy New Year!  Let’s hope 2017 is a good one, but we have to make the best of it, and Lake Tahoe is a great place to do just that.