That’s what we wanted, and that’s exactly what we got.  A good old fashioned Sierra dump.  The type of snowfall that makes people move out of town;  the type of storm that has longtime locals remembering the big ones from years past and remarking to one another that this might be a “real Tahoe winter.” 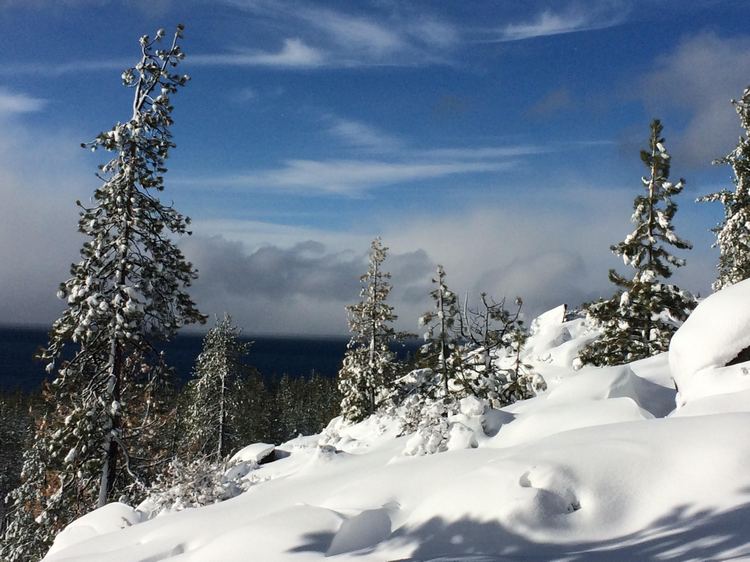 It snowed four feet in one day at lake level and double that in the upper elevations.  Up on top at Kingsbury Village, one resident measured ten feet in just a day and had trouble locating his truck.  The extremely wet Pineapple Express weather system out of the South Pacific joined forces with an Arctic blast and gave us the “Sierra cement,” which sticks to everything and accumulates so fast it’s hard to keep up with.  And it’s not just one storm: they keep on coming and coming. The storm door has blown open, and it may not close until summer.

The storms came, and now the people will come, and the town will turn into a crowded winter wonderland.  Making the trip over a mountain pass during or after such big storms can be harrowing, but once here you can see how happy snow can make people — and they’re glad they made the trip.  Getting to Lake Tahoe is a struggle when the snow hits this hard, so a big shout out of thank-you’s for the non-stop efforts of NDOT and CalTrans and the private snow removal people is called for. The crews keep the roads driveable so that the town’s restaurants, hotels and other businesses can stay open and so the economy thrives. 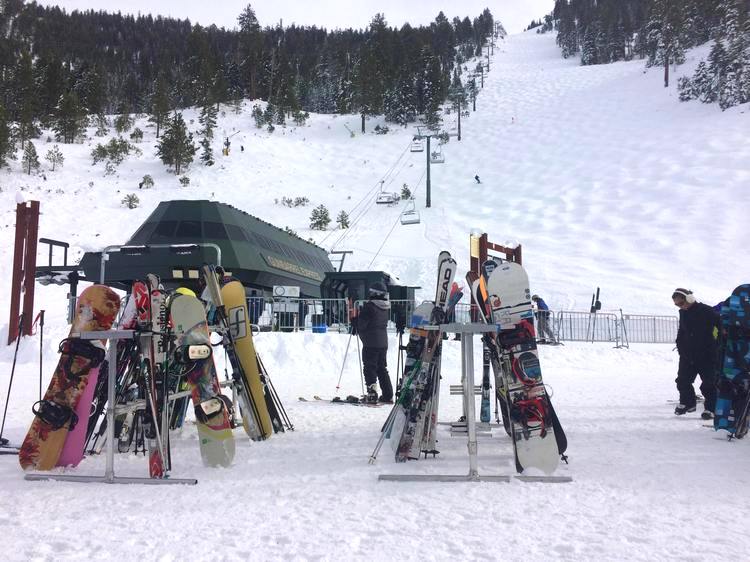 Skiing is on the itinerary for most who travel to the mountains in winter. The weekends at South Lake Tahoe are a large zoo of people packed into a small town, overwhelmed with mounds of snow in parking lots and streets, making space limited. So try to keep calm, take it easy and be patient; things inevitably slow down, so don’t be in a rush. Good things come to those who wait, and while waiting in the sometimes quarter mile long line at the Heavenly Resort Gondola, just know that unlimited snow is waiting for you to carve it up.  But thankfully, the whole of Heavenly Mountain is open in both Nevada and California.  Stagecoach, at the top of Kingsbury Grade (Hwy 207), is open with its high-speed quad chairlift, which whisks people to the top of the mountain and to miles and miles of good skiing.  On the California side, Gunbarrell Express and The Tram are open and ready for business, too.  The parking is always an issue on weekends, so go early.  The Gondola at Heavenly Village has paid parking in the garage, but next door at Harrah’s Casino they allow skiers to park in their lot free.   And after the day’s over you can pop in to Harrah’s and get a drink or a bite to eat.  The Heavenly shuttle buses may be a good bet, running all day and drop off right at the lift on the Nevada side of Heavenly. 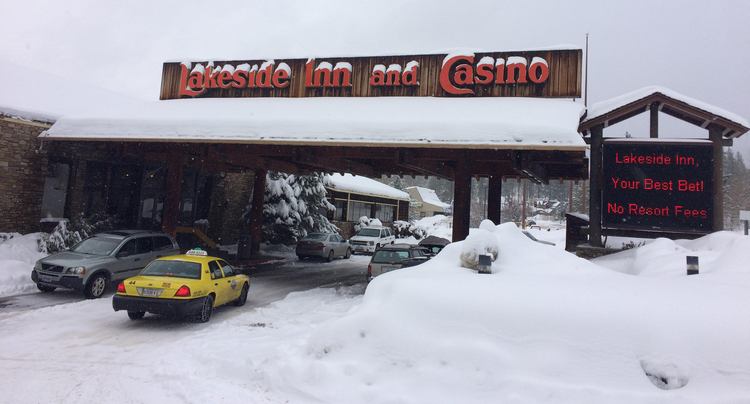 One stop the Heavenly shuttle makes is in front of Lakeside Inn and Casino, a locals favorite, a little bit down from the casino corridor at Stateline.  The rooms are nice, restaurants have really good food and the bars serve drinks 24 hours a day, seven days a week.  Located at the bottom of Kingsbury Grade, Lakeside is a great spot to kick off your day of wintry fun.  Grab breakfast at The Timbers Restaurant with an Eggs Benedict and a Bloody Mary, or maybe have Huevos Rancheros and a Bloody Maria at the Latin Soul Restaurant on the bottom floor of Lakeside Inn. Then, grab your skis or board and head up the hill.  Or you may want to take a stroll through Rabe Meadow located next to the casino and take in the wonder of Lake Tahoe in the winter. Especially on a calm day, the Lake is like glass and the silence is deafening. Very peaceful.  Snowshoe rentals are available at the 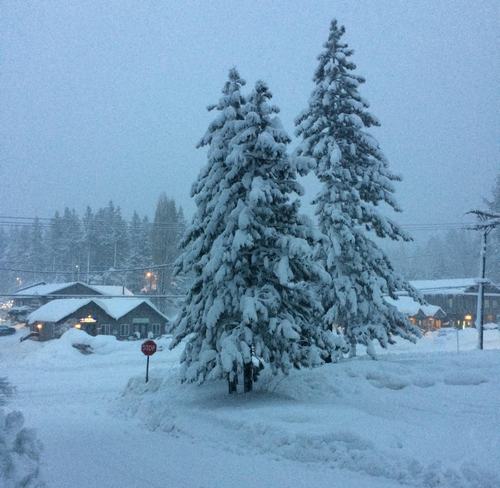 Shoreline Sports Shop, also located next to Lakeside Inn on Kahle Drive and Hwy 50.  If the indoors is more your fancy, Lakeside is the place to be; friendly employees make you feel right at home, and you can smoke and drink if you like, too.  Super Bowl LI is on February 5, and the sports book is ready to take your bet on everything from the outcome of the game to how long the national anthem will take.  It’s a great sports bar, with drink deals, good bar food and lively conversation with fellow patrons enjoying the big game.

Another lively place to enjoy the Super Bowl or any other sporting event is Audible’s Sports Bar and Gaming, up the hill a bit on Kingsbury. The friendly people at this establishment are celebrating a one year anniversary on February 21 with all sorts of fun and games: food and drinks specials, prizes and a raffle for a Super Sport Chevy Camaro.  Audible’s has become a local favorite for lunch and dinner, with great food specials every day.  Chef Ron is coming up with great food ideas all the time.  Last time I had lunch here, it was a pot-roast sandwich on the specials menu: delish.  Live music on some nights and poker machines at the bar make it fun place to go.

On a sad note, the Tahoe Queen sternwheeler is no more.  In the fall, the ship caught fire while workers were doing some welding work on the top deck, according to news reports.   Owners first thought they might be able to 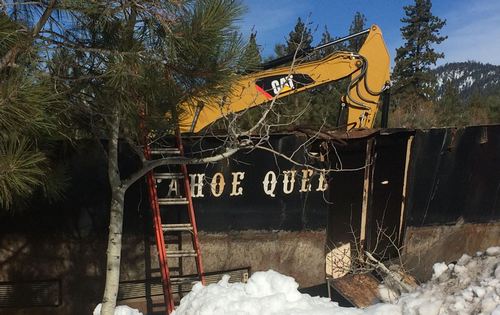 salvage the vessel, but it was recently determined that was not the case.  In January, crews pulled the boat from its mooring at Zephyr Cove up to the parking lot and began dismantling it.  The engines were salvaged because the Queen had recently been refurbished.  But a number of running-aground episodes had them in hot water with the Coast Guard, so the boat had sat unused for some time before the fire.  Now, what remains is just the hull, sitting on the pavement,  filled with debris  and waiting to be hauled off the dump.  So, bon voyage, Tahoe Queen. A lot of good times were had aboard her. The M.S. Dixie II remains and will continue offering cruises in the winter, and on a crisp, clear day the Lake is absolutely beautiful.

A historical winter is in the making, maybe, so get on up here to the Lake and be part of it.  Years later you can tell people you were at Lake Tahoe for the winter of 2017.