Shoulder season, the time of year between the peak winter and summer travel seasons at places like the South Shore of Lake Tahoe, experiences a downturn in visitors and activity.  Winter has turned to spring and people put away their skis and snowboards and start to think warm weather thoughts. Tahoe is put on hold for people until the warm summer months lure people back in droves. But if you want a less crowded and quieter time, the gem of the Sierra Spring may be right what you need.

Ski season is winding down but people can still hit the slopes in April, and with periodic snowfalls throughout the spring you might get some fresh tracks. Probably best to get on the mountain in the morning for a half day before the sun turns the snow to mush by the afternoon. Heavenly Resort plans to stay open into April, and the snow is holding out pretty good.

Daylight savings time leaves a lot of afternoon time to do some other Tahoe springtime things.  With the big thaw underway, it brings all the creeks and waterfalls in the area to life.  The Truckee River in South Lake Tahoe meanders through the city and is great place to go for a stroll and see the river at its capacity.  Or head over to Emerald Bay and see Eagle Falls going full blast above the most photographed spot in the world.  The water may still be too cold for swimming or boating but the empty beaches at Zephyr Cove or Nevada Beach offer a nice place to catch some rays or just sit and think good thoughts.

Nightlife at South Tahoe doesn’t take a break, and one band that will be performing April 10 at the South Shore Room inside Harrah’s will have you grooving and cruising on  a righteous trip to a land without bummers. Dark Star Orchestra will bring the Greatful Dead to life with some of the Dead’s exact set lists from some of the concerts the band did while touring for four decades.

Rates at local hotels and casinos drop during this time of year.  At MontBleu Resort, Casino and Spa they recently did $25 million in renovations to all their hotel rooms, so you can enjoy a top flight room at a discounted price.

Across the street at Hard Rock Casino they also underwent a major renovation to the casino and hotel.  Also at Hard Rock is the Oyster Bar if you get a hankering for some seafood.  They offer classics like shrimp cocktail, oysters on the half shell, steamed clams and pan roasts.  The smell of Tabasco as they fry up the shrimp and crab for the pan roast reminds me of the famous Union Oyster House in Boston. Very good for a lunchtime date with clients or friends. 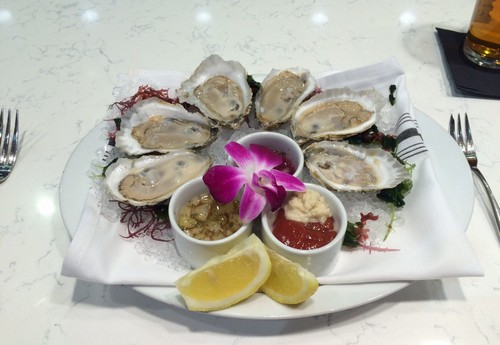 Locals kind of need the spring season to happen to slow things down and rest before summer comes roaring back with the millions of people that come to visit.  But tourism is also the lifeblood that keeps the town going.  So if you’re in need for some rest and relaxation, it’s the springtime at Lake Tahoe.

The oldest tavern on the Nevada side of Lake Tahoe at Marla Bay is currently under remodeling and is changing their name back to what is was in the 1950s.  Sam’s will revert back to Wally’s Huddle Grill and Tavern.  Coming soon, most likely by the summertime.