In previous NevadaGrams (here and here) I pointed to some Nevadans who have made prominent acting careers, but how did I miss Reno Browne?

She was born Josephine Ruth Clarke in Reno in 1921, the daughter of an attorney, and as a girl she appeared in movies filmed on location nearby. She traveled to Hollywood, got work as a trick rider and stuntwoman and eventually starred opposite Johnny Mack Brown as a leading lady in low-budget Westerns. She once reminisced, “When I made the Johnny Mack Brown films, they changed my name to Reno Blair, to avoid any confusion. They changed Johnny’s horse’s name from Reno to Rebel. Without those changes, things would have really been confused.” Other co-stars included Whip Wilson and Jimmy Wakely and by the time the demise of B-Westerns forced her retirement, she could ride the Alabama Hills blindfolded. 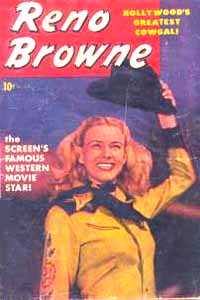 Before she left Hollywood she married Lash La Rue, but their union didn’t last. She also had her own radio program in the 1940s, “Reno Rides the Range”, and there was a comic book featuring her fictional exploits. She retired to her hometown of Reno — where the Lash LaRue Motel was a local landmark in the 1960s — and died there in 1991, aged 70.

It’s probably just a coincidence, but still . . . Whip Wilson and Lash Larue? It does make you

Rebecca Sanchez of Las Vegas writes about taking her kids out of town over Nevada Day weekend. “The time of pioneers, miners, and those who lived off this land are often very difficult for students to envision through everyday instructional materials. A common family outing can make the pages of a textbook turn into a hands-on experience that will last a lifetime; camping in Central Nevada. . . . [More about their family outing to Horse thief Gulch]

As Mark Twain wrote in Roughing It, “The cheapest and easiest way to become an influential man and be looked up to by the community at large was to stand behind a bar, wear a cluster-diamond pin, and sell whiskey.” There’s an interesting new website exhibit called “Havens in a Heartless World” devoted to exploring and explaining the historic western saloon. The more than 300,000 artifacts retrieved during the excavations of four Virginia City saloons amount to the nation’s richest assemblage of saloon-related artifacts. The sites were an Irish saloon, a combination saloon/shooting gallery, John Piper’s Old Corner Bar (associated with his famous Opera House), and the Boston Saloon, an African-American establishment that operated from 1864 to 1875.

There’s a lot going on in Las Vegas. For example, the Southern Nevada Center for the Arts has opened on the second foor of the Neonopolis at 450 Fremont Street, across from the Fremont Street Exerience in downtown Las Vegas. From 11 am until 9 pm you can prowl through 30 open studios and galleries (individual studio and gallery hours vary) to observe artists (but don’t feed them) and buy original artwork. It’s open to the public and admission is free . . . The Nevada Southern Railway sold out all four days of Santa Trains in December, carrying 8,916 passengers — better buy your tickets in advance next year. And after taking January off, the Boulder City railroad will commence operations again February 7. Here’s the schedule . . . Another new astonishment in Las Vegas: Dinner in the Sky,

which offers a unique dining experience to say

the least. Located in the parking lot at the Rio, the attraction includes a tent containing a lounge where diners congregate from 4 to 9 pm to enjoy refreshments while ordering their dinners (medallions of filet or sky chicken), having their photos taken and making their wills (just kidding) while awaiting their turns. When their names are called, they take their seats, strap on their seatbelt harnesses, and rise slowly and gracefully 180 feet into the air to engage in witty table talk and eat dinner while gazing out over one of the most appealing cityscapes in the world. Except, of course, for those customers whose eyes are clamped shut and whose muscles are frozen in living rigor.

I have a fear of heights. I can’t even watch a movie filmed on a rooftop without experiencing testicular ascencion. But I am assured by an employee that her own discomfort dissipated in a few minutes, and she was able to stop trembling and enjoy the experience. Rich and famous lifestyler Robin Leach couldn’t overcome his fear of heights and opted out, but I’m actually looking forward to it. It’s on my to-do list for our next visit to Las Vegas . . . MonteLago Village at Lake Las Vegas has created a unique floating ice rink; open Monday – Friday from 3 to 9 pm, Saturday and Sunday from noon to 9 pm, until February 15th. Day passes are available for $12/child (12 years and under) and $15/adult . . . The Liberace Museum, 1775 E. Tropicana Avenue at Spencer, is offering jazz performances on the second Sunday of each month in the Liberace cabaret showroom. The Museum opens at noon and offers free Museum admission for locals with Nevada ID and their guests. Jazz performance times are 1:30 p.m. and 3:00 pm, and a minimum donation is requested. Contributions support the work of the Liberace Foundation. For more information: 702-798-5595 . . . The inviting city of Mesquite thrives by welcoming Las Vegans seeking a pleasant getaway, and has launched a new website to ease the process of booking hotel rooms, entertainment and — Mesquite’s trademark attraction — golf . . .

The Fire and Ice Festival (which began as one man sculpting a trout on top of the frozen lake and has become a nationally known festival) is held at Cave Lake State Park, just outside Ely each January. This year the snow and ice sculpting competition was the prime attraction as usual, but the festival also celebrated the Centenary of locomotive #93 of the Nevada Northern Railway. On one hour-long

Saturday run with two cars filled with passengers and a VIP car, fireworks were launched from the train itself . . . You can now visit Stewart Indian School‘s self-guided cell phone tour called the Talking Trail. In its 90 years, the former boarding school near Carson City saw more than 20,000 American Indian students pass through its portals. You can take the tour by dialing 775-546-1460, following a map of the campus and its 20 designated sites, and tapping a tour-stop number to hear the reminiscences of former students and employees . . . No sooner did I report on the changes in Eureka than everything changed again. The Pony Expresso Deli has now reopened (although it lost its distinctive “o” and is now simply the Pony Express). So far it’s only open Thursday, Friday and Saturday but as the new owners settle in and the weather warms up the schedule will be expanded. And the Eureka Cafe, famous for its burgers and excellent Chinese food, has closed for the winter and maybe forever . . .

That means the best burger on US 50 is now at (ta da!) Middlegate! . . . A few weeks ago a Gardnerville man was playing Texas Hold ’em in the Carson Valley Inn Poker Room. He held the ace of diamonds in the hole. The flop turned up two more diamonds, the three and the five. When he saw the deuce of diamonds on the turn and the four on the river, he was betting big on his straight flush. But wouldn’t you know? John Garrett, also of Gardnerville,

had the six of diamonds in the hole, so his straight flush was higher! But! The Carson Valley Inn pays a $1,000 cash prize whenever a hand of “four-of-a-kind” or better is beaten by a higher hand. So, an immediate $500 in cash helped console the holder of the losing straight flush, $300 plus the pot went to the winning straight flush and the remaining $200 was split among the other aweuck players at the table . . . I became a fan of the Carson Valley Inn’s holiday menus last New Year’s Eve (the roasted duck!), and they have posted Valentines Day and St. Patrick’s Day menus for Fiona’s and Katie’s Country Kitchen . . . Karl Breckenridge, long a columnist for the Reno newspapers and a devotee of the city’s tumultuous history, has an engaging website devoted to lively writing about Reno in earlier times. Highly engaging, even if you weren’t around then . . . Speaking of Reno in earlier times, 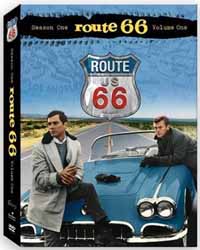 you can get an appealing glimpse of Reno and Virginia City as they were 50 years ago by adding Route 66 Season 1 to your Netflix queue and watching episode #22 titled “Eleven, the Hard Way”. It stars Martin Milner as Tod Stiles and George Maharis as Buz Murdock, of course, but Walter Matthau also guest stars as “famous gambler Sam Keep.” In a laughably farfetched plot, the townsfolk of Broken Knee (Virginia City) hand their money over to Sam to gamble with in Reno. If you can tune out the drama and focus on the background, you’ll see a Nevada that scarcely exists today . . .

The Nevada State Museum, at 700 Twin Lakes Drive in Las Vegas is hosting the Second Annual Las Vegas Showgirl Art Competition Exhibition now on display in the East Gallery. The Competition was established by former showgirl Lou Anne Chessik, who performed on Las Vegas stages from 1979 through 1991. I’m told the showgirl tradition dates back to the opening of the

Folies Berg’re in 1869 Paris. Showman Florenz Ziegfeld brought showgirls to the New York stage in the 1910s and ’20s, while producer Donn Arden introduced them to Las Vegas when he opened Lido de Paris at the Stardust in 1958 . . . As the 2009 session of the legislature begins, the Nevada State Library and Archives will provide a free Legislative Hotline phone service week days 8 am – 5 pm starting February 2. The hotline provides information on status and summaries of bills, committee agendas and schedules, legislator contact information, legislator voting records and identification of bills by subject. You can also get information on how to receive copies of bills. Hotline staff will even help callers navigate the legislative website to find information available on the Internet. The Hotline numbers are, Statewide: 1-800-995-9080 (in-state only; ask for the Legislative Hotline); Las Vegas: 702-486-2626 (ask for the Legislative Hotline); Carson City: 775-684-3360. You can also E-Mail your questions to the Legislative Hotline

Overheard at the Gaudi Bar at Sunset Station in Henderson: “I married Miss Right. But here’s the thing: I didn’t know her first name was Always.”