In the previous NevadaGram I made a fleeting reference to the boom that lit up Tonopah in the early 1980s.

I was lucky enough to visit Tonopah at the height of that second boom.

Back then there were a dozen mines working within 50 miles of the old city, and the Air Force was constructing a major facility for testing and perfecting the Stealth bomber. Because there was little existing infrastructure on the old Tonopah Army Air Base, where B-24 Liberator bomber crews were trained (here’s the reminiscense of a navigator who trained there in 1944), the Air Force leased entire motels for their men.

The population went from fewer than 2,500 to more than 4,000 in about a year. When school was out in June, 1980, there were 475 kids enrolled in school. When school opened again in September, there were more than 700 students to find classrooms and teachers for.

Every structure with a roof over it was rented. Every vacant lot that could accommodate a trailer was put to use, giving the tangle of old streets an incongruous look: a flamingo-pink aluminum cube stuck between a swaybacked old cottage on one side and a fitted stone mansion on the other.

At Coleman’s, the only grocery store in town, the clerks worked steadily to restock the shelves with almost 6 tons of groceries every day, and customers idled their cars in the street or drove around and around the block waiting for spaces to open up in the parking lot.

The Mizpah Annex Cafe was a crush of men in Air Force fatigues or the flannel shirts and blue jeans of construction workers and miners. Waitresses raced from table to table with pots of coffee and platters of flapjacks. Fleets of buses hauled the men out of town to work. Nine hundred of them were building the great new Anaconda molybdenum mine and mill, and hundreds more worked in a dozen gold and silver mines producing bullion at a furious rate.

On the northeast side of town Anaconda built a 500-acre subdivision of new homes, with a new school and a park so their permanent employees wouldn’t have to live in their cars. The rattle of hammers and the snarl of saws was heard everywhere in town, and anything with a roof could rent for $300 a month. Plans of every optimistic kind were announced one after another, and one Friday afternoon over coffee at a Main Street restaurant I watched a man float around the room from booth to booth, keeping five separate deals going at once.

Local people marveled at the revival, but it wasn’t until there was an armed robbery in a Main Street parking lot that they acknowledged Tonopah had become a city again.

Paul Cirac and I arrived one evening in the midst of the hubbub, working on a new edition of The Complete Nevada Traveler, and we connected with Ken Evans, at that time a reporter for the Tonopah Times-Bonanza. We stood three deep at the bar at the Mizpah shouting to one another over the babble and then Ken invited us to his rented room in the Nyeco Building on Main Street.

As we walked along, we passed workers from Reno, Las Vegas, Salt Lake City and Sacramento standing in line at every pay phone (most of them with 6-packs under their arms) to call home. Ken told us with a certain amount of pride that he had a large second-story corner room that was once the law office of Pat McCarran, the legendary U.S. Senator who had long ago served as Nye Country District Attorney. 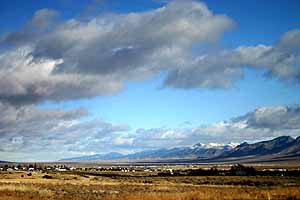 We reached the front door and climbed the unlighted stairs to the second floor. The upstairs hallway was also dark, and we had to watch our step as we followed K.J. toward his room. Ken was very big around, and there was no room for us to do anything but follow him. Ahead of us an open doorway spilled light out into the dark hall, and as he stepped into the splash of light KJ peered in, and stopped suddenly in his tracks.

Paul and I piled into him and also came to a halt, looking over his shoulders into the brightly lighted room. A bed and a dresser floated above a floor covered with empty beer cans, and there was a mound of empties on the bed itself. As the three of us gaped in wonder, the heap of beer cans on the bed suddenly shifted with a great clatter and a gray haired woman sat up. Cans scattered to the floor and bounced around as she propped herself up, large breasts flopping out of her nightshirt, and focussed her bloodshot eyes on KJ, still frozen in her doorway.

“Hi big boy,” she said, as one final can fell to the floor. “Wanna party?”

And then one day the boom was over. The price of gold and silver slid and the mines closed down. The market for moly went so bad that even mighty Anaconda had to close down its operation and sit on its $240 million investment. The Air Force got enough of its base built to move the men inside, and then encouraged them to stay there. Tonopah slowed right down again, and it’s been slowing down ever since.

At least one subscriber was surprised to find out that Dawn Wells, “Mary Ann” on the Gilligan’s Island television show, was born in Reno.

But it turns out she’s not the only Reno actress who has made a name for herself on television.
Remember waitress Shelly Johnson on Twin Peaks? Well, that was Mädchen Amick, and she was born in Sparks (on December 12, 1970), grew up in Reno and dropped out of McQueen High School to leave for Hollywood when she was 16.

It was two years before she got her first part, in an episode of Star Trek as a shape-shifter who turns into a teddy bear, and another year before she appeared in Baywatch. In 1990 director David Lynch chose her to play Shelley in Twin Peaks. Since then she’s been pretty busy.

She’s been in many episodes of Fantasy Island, E.R., and The Gilmore Girls, and earlier this year she landed a big part in Viva Laughlin, playing Natalie Holden. So she came back home to Nevada again, but all too briefly — Viva Laughlin lasted only 4 days on CBS (The New York Times began its review: “[it] may well be the worst new show of the season, but is it the worst show in the history of television?”).

Also: she can tie a knot in a cherry stem with her tongue. I’m not sure Dawn Wells can do that.

And since we’re on the topic, let’s raise a toast to Nevada’s first movie actor, Hobart Cavanaugh, born September 22, 1886, the son of a V&T Railroad engineer. Cavanaugh was a stage actor who made his film debut in San Francisco Nights (1928). Over the next few years he became an established Hollywood character actor, mostly in small roles, and not always with film credit, but eventually with more substantial roles in films such as I Cover the Waterfront. By the mid-1930s he appeared in more prestigious films such as A Midsummer Night’s Dream, Captain Blood and Wife vs. Secretary.

By the end of his life he had appeared in more than 180 films, most of which can be seen late at night on Turner Classic Movies. His last movie was Stella, in 1950, the year of his death in Woodland Hills, California.

And before saying goodbye to Nevadans in the movies, we have to say goodbye to Brad Dexter, born in Goldfield (as Boris Michel Soso) in 1917. He studied acting at the Pasadena Playhouse and appeared on Broadway, and in 1946 he worked with Roy Rogers and Dale Evans in “Heldorado”.

In 1947 he was in “Sinbad the Sailor”with Douglas Fairbanks Jr., and in 1950 he appeared in “The Asphalt Jungle” (1950) with Marilyn Monroe. His acting career continued through Secret Ingredient in 1990 and many of his films are highly regarded. Probably the most famous of his movies was The Magnificent Seven, in which he was one of the good guys. He came to the end of his road in 2002, age 85.

Stop the presses: On New Year’s Eve Fiona’s Bar and Grill at the Carson Valley Inn is offering, get this, Roast Goose with prune and apple stuffing and red wine giblet gravy for $29.50.

The Nevada State Railroad Museum hosts its 20th Annual Santa Train on December 15 and 16 from 9 am – 4 pm at a special discounted price of $2 per seat. Rides feature a visit with Santa and a candy cane for all good little boys and girls. The museum is at the south end of Carson City at the intersection of Fairview Avenue . . . Excerpts from the guestbook in the Jimmy Stewart room of the Hotel Nevada in Ely: 9/20/01 We are historic too, 40 years together 10/8/02 Celebrating our 7 year anniversary.

The reservation staff is awesome. We love it here and plan on staying here over and over till we have stayed in all the rooms that are named, and then we will start over again. Thanks again to the staff of this historic hotel. 12/8/02 First night together as husband and wife – nice room 12/9&10/02 Celebrated Bob’s 78th birthday — loved it so much we stayed an extra day 4/12/03 She’s the woman I always dreamed of, we’ll be together forever! He’s my greatest blessing. I will always appreciate what a fine man he is! ps — door kept blowing open while we were naked – Beware! 4/28/03 It was our lucky night last night Won $180. It’s fun to win for a change 5/13/03 Jon felt alienated from casino culture after losing his $5 limit in 20 minutes. Claudia was so overcome with the charm of

this place that she drank from someone else’s beer glass. A fabulous town, good times. 8/7/03 My secretary and I love this room — we got a lot of work done! 4/2/04 Loved the shower, hotel and town! Maybe someday I can sleep with my boss here too! 6/30/04 No Ghosts!!! 8/7/04 On our way from Annapolis to Monterey in our 1923 Rolls Royce – Lost 10/13/07 I found my true love in Jimmy Stewart’s room . . . This article from the Billings Gazette describes how American Indian tourism markets are expected to blossom as international visitors return to the USA after the greatest travel decline in U.S. history in the aftermath of 9/11. Nevada Indian Territory is a part of our own effort to bring visitors to Native American locales throughout the state . . . So here’s Dick Stephens of Reno, thinking his four sevens were boss in the 7 Card Stud Hi/Lo Split game he was playing in at the Carson Valley Inn the other night. Ken Bryant of Gardnerville was also in the game.

“Based upon the cards showing, I knew he probably had four 7s. I just needed that king on the final card,” Dick said. The pot grew to more than $100 when the final bet was called and Ken happily turned over the fourth king he was dealt as his last card. But it was no problem for Dick because he and all the players at the table got to share in the $1,000 Bad Beat Prize, which is paid whenever a hand of 4-of-a-kind or better is beaten by a higher hand. $500 went to Dick for the beaten 4-of-a-kind hand and $300 (plus the pot) went to Ken, with the remaining $200 split between the other players at the table.

Overheard at the bar of the Hotel Nevada & Gambling Hall in Ely: “If I had known it was harmless, I’d have killed it myself.”