If you have visited our home page lately, you may have clicked the link to Edna Purviance, Nevada’s Forgotten Movie Star. For a long time I thought Pansilee Larson and I were the only people in the world who still remembered Edna — she was Charlie Chaplin’s co-star in the movies that raised him to fame and fortune — but it turns out otherwise. One who cares, and who has converted that caring into a marvelously detailed website about Our Girl is Linda Wada, an Oregonian who has tirelessly researched Edna’s life, and particularly her girlhood years in Paradise Valley and Lovelock. 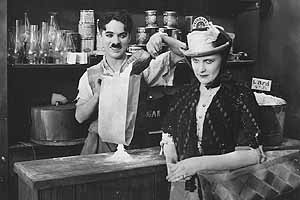 Most recently she has added a Chapter on Edna’s father, the peripatetic Madison G. Purviance, who divorced Edna’s mother in 1902 and moved to California. Edna is the only one of this large Nevada`family to catch the public eye, but they were an interesting bunch, and Linda’s website presents their saga in full and fascinating detail. An annual

Edna Purviance Film Festival is being discussed for her birthday, October 21. Her films with Chaplin would be shown of course, and the grand finale: a screening of her post-Chaplin feature, “A Woman of Paris” with Adolph Menjou. If Linda will lead a walking tour of Edna’s Lovelock girlhood, we would have a real chance for time travel.

One of the most enjoyable messages I pick out of the endless avalanche of spam is Mark Bassett‘s weekly “At The Throttle” column. Mark is an engaging writer, and “The Ghost Train of Old Ely” is a beguiling subject. Here’s an example. You’ll enjoy exploring this interesting and comprehensive website about one of Nevada’s most wonderful treasures, The Nevada Northern Railway.

Speaking of wonderful Nevada treasures, the sale of the Mizpah Hotel in Tonopah has fallen through and it is back on the market. Yes there are many good alternatives to the old landmark for an overnight stay, including our website client Tonopah Station at the top of town, but nothing represents Tonopah more in the public mind than “the finest stone hotel in the desert”, as it advertised itself in 1908. Isn’t there someone with a few million at hand, a vision of the prosperous future, and a lots and lots of patience? If so, you are needed in Tonopah right away.

There’s no inertia in Nevada’s international outreach efforts. After opening an office in China, The Nevada Tourism Commission has partnered with the LVCVA and Travel Pie-Mexico International Destination Marketing to maintain the Nevada presence in our third largest visitor nation. So if you find yourself homesick in Mexico City you could stop by Alejandro Dumas No. 124 Colonia Polanco 11560 and book a flight to Yerington or Wells.

Bob Carroll, the tireless Reno Radio All-Star, sent this response to the previous Nevada Travelgram: “David — Agree, Nevada is a beautiful state. I had the occasion this weekend to drive over to Ely and back — beautiful mountains, green valleys — peaceful. One thing bothered me though, the lack of rest room facilities at the sparse roadside stops. How do we get the state to address the problem. Lots of Historical Markers — but no Johns!”

Actually, this is part of the Nevada Adventure program. By not providing bathroom facilities, the state is encouraging travelers to experience our state the way the pioneers did. Next time you make the drive, just pull off the pavement, stroll into the sagebrush, and participate in the great tradition of Jed Smith, Kit Carson, John Fremont and the wagon train emigrants.

Bob has a program on KUNR on Wednesday evenings playing “The Music of America”, the perfect rebuttal to computer-managed radio programming. Last Wednesday night I was pulling up at The Cider Factory Resturant — no, that’s not a typo, that’s Swedish — in Virginia City, joining friends and family for dinner. I couldn’t get out of the car, I had to hear it all as Bob played “Abba Dabba Honeymoon” and Count Basie’s “One O’Clock Jump” back to back, the perfect haiku-sketch of an era with just two records.

Overheard in the morning line for cinnamon buns at the Steptoe Valley Inn in Ely: “I’m telling you, Fred, the very act of seeking sets something in motion to meet us. There’s something in the universe, or in the unconscious mind, that responds as if to an invitation.”