The recent Governor’s Conference on Tourism, held in Reno last week, focused on Nevada’s new slogan, “Bring It On”. Poster Boy for the new campaign (and speaker at the Tuesday luncheon) is Glen Plake, an extreme skier who goes right on over the edge. He grew up at South Lake Tahoe and resides today in the hills above Lake Lahontan, where he water skis and bounces down country roads between winters.

You can get a copy of the Commission’s new Adventure guide “The Dirt” here.

The effort to bring attention to Nevada’s uncrowded outdoor activities is being greeted warmly in rural Nevada. Folks there are gratified at getting recognition at last for their unique recreational resource: the 85% of the state that is public land. Accessible and user-friendly, this immense realm of almost-unspoiled landscapes is a national treasure of enormous value and can be a great economic resource for the state for generations — until the rest of the country gets uncrowded again.

As if to emphasize this new direction for the state, Reno has been selected to host the ESPN Great Outdoor Games July 10-13,

2003. The 2002 Games attracted 60,000 to Lake Placid NY, and were seen on TV. Events include archery, rifle and shotgun target shooting, bass and fly fishing, three sporting dog events and eight timber events, from Log Rolling to Tree Topping. ESPN, ESPN2 and ABC Sports will televise more than 19 hours from the Rancho Santa Fe Park, the Truckee River and other venues to be announced. More information here.

A recent website visitor asked what the weather will be like in Reno in mid-winter. Our reply: 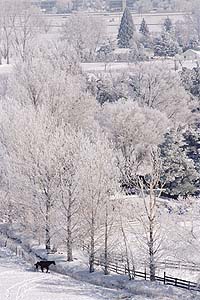 No-one can tell you what the Reno weather will be like in mid-winter.

It could be well below freezing at night but warming into the low 50s during the day with sunshine, blue skies and snowy peaks looming to the west. Or it could be a ferocious blizzard followed by pogonip (an ice-flecked freezing fog that burns away in mid-morning to reveal the fresh snow sparkling from every ice-crystallized surface). Or both. Either way it will be beautiful.

Then again it could be one of those gray, soupy, soppy, sloppy days that inspired Ezra Pound to sing his Ancient Music.

We never know for sure (another reason we’re so popular with adventure travelers!). . . . Dress warm and waterproof! 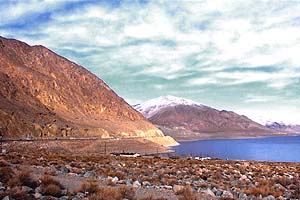 The great winds of a week ago did serious damage at Hawthorne, most especially at Walker Lake, where the steep massif of Mt. Grant drops to the lake level. The new owner of The Cliff House is making plans for a big seaplane “Splash-In” at the lake this summer. In the meantime, Chris the bartender is an amazement, performing mystifying magic at the bar. Also in the meantime the lake continues to dwindle because of upstream diversion. The Walker Lake Working Group is making an effort to save this sparkling remnant of the ancient inland sea but it will take mighty big magic to accomplish. Upon departure from Hawthorne I had a massive omelet at Maggie’s Restaurant, highly recommended!

Late-Breaking News — The makers of Old Spice Deodorants have pledged $125,000 toward next year’s Armpit Festival in Battle Mountain. Local folks are recovering from their astonishment and delight just as they recovered from their initial shock and outrage. They are now busy with plans for a much-expanded celebration. But alas, Donna’s Diner is still closed. . . .

Overheard at the Lake Mead Marina on Lake Mead: “Be brave for me darling, I’m sailing without you.”