Diamond Jack wasn’t surprised when he received an invitation to visit El Burro Borracho at the Rio All-Suite Hotel. The restaurant, adjacent to the lively VooDoo Beach pool, comes from Emmy Award-winning television host Guy Fieri, who I met and spent time with when he opened Guy Fieri’s Vegas Kitchen & Bar at The LINQ Hotel.

The literal translation of El Burro Borracho is “Drunken Donkey,” and one can achieve that moniker by enjoying Fieri’s signature jalapeno-infused Caliente Margarita.

Las Vegas is all about big and bigger. Now, the world’s largest free-standing outdoor sign has received a digital upgrade that makes it even bigger and better. The iconic Westgate Las Vegas Resort sign stands 28-stories tall near the corner of Paradise Road and Elvis Presley Blvd. The sign has a state-of-the-art LED video display that covers a combined 15,000 square feet and that means an LED display area of nearly 5,600,000 pixels … larger than the Dallas Cowboys’ famous stadium sign. Visitors landing at McCarran International Airport will be able see the new sign from more than three and a half miles away. It joins the 267-foot indoor 4K LED screen in the world-famous Westgate Superbook, home to Nevada’s largest wagering system.

A man was telling his neighbor that he had just bought a state-of-the-art hearing aid.

“It cost me four thousand dollars,” he said. “It’s perfect.”

“Really,” answered the neighbor. “What kind is it?”

Get Your Groove On And Relax In Vegas!

Have you ever thought about learning to tap dance? You thought this was a dying art, didn’t you? Go and see for yourself at the Las Vegas Tap Festival (LVTAPFEST) being held May 11th through 13th at UNLV’s Ham Fine Arts Building (HFA) in the Black Box Theater. This is their 6th festival where you can learn to tap, or if you already know how to tap, can join the intermediate, advanced or master’s classes. 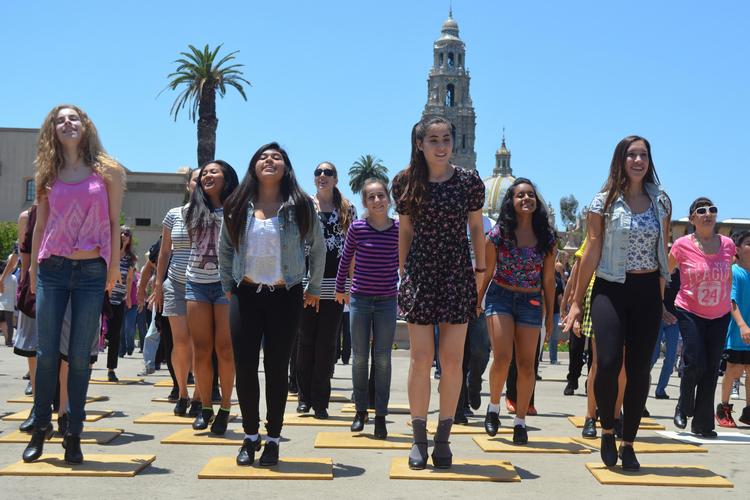 The beginner’s package is $239.60 and includes 11 full classes and is for those who have had 1 year or less of training or those that want to enjoy the experience at a slower pace. The intermediate and advanced packages both include 9 full classes and are $265.99 each. The individual master’s class is $44.28. They also offer a senior package for only $134.02.

All the packages include classes in technique, specialty and mastering the art. You can also drop in on a class for $33.72 if you do not have the time to attend the full package. And the show, Keepin’ The Classics, is $23.16 presale. The show will feature Arthur Duncan who performed on The Lawrence Welk show for 18 years and  appeared on Little Big Shots and The Talk. (All prices above include the fees.) 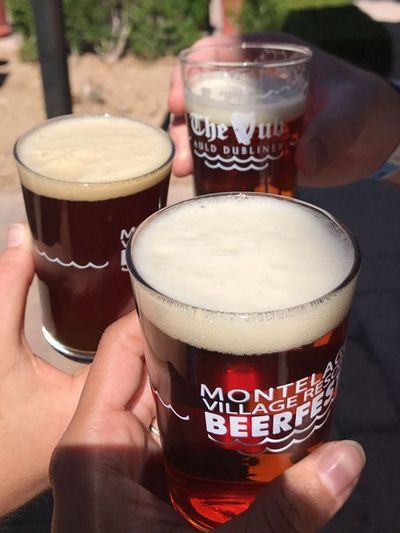 Have you been out to Lake Las Vegas yet? If you missed their dragon boat races last year you can try their MonteLago Village Beerfest between 2 p.m. and 7 p.m. on Saturday, May 12th. They will have tents set up for 30 breweries pouring over 100 different beers. You can stroll through their village and relax in the outdoor scenery of the lake.

Note: They are only selling 2,000 tickets for this event! Admission tickets will get you a wrist band and souvenir glass for the beer. Try to order the tickets in advance from their website http://mlvbf.com/#tickets. Tickets in advance for the VIP admission at 2 p.m. are $45 and are limited to 1,000 attendees. General admission at 3:30 p.m. is $35, limited to 750 people. They will only have 250 tickets available on site at the Admission Tent; however, the 2 p.m. entry fee will be $60 and general admission will be $45 if you wait until the day of the festival.

Keep in mind that if you miss the opportunity to purchase admission tickets there are still other vendors and restaurants open for you to enjoy. The trip is worth the drive to enjoy the beautiful scenery of the lake area.

Looking for some peace and harmony? Craig Ranch Regional Park in North Las Vegas is hosting The Love In May 18th through 20th. This is the first Silver State Cannabis Festival. This is truly a weekend event, with over 3,000 campsites and RV spaces being provided to keep you in the groove. Musical acts, including Ziggy Marley, tribute bands to The Grateful Dead, Journey, Chicago, The Beatles, Bon Jovi, and others will be performing throughout Saturday and Sunday.

Food vendors, art, yoga, snacks, meditation, dancing, cannabis education, breweries, and games will be featured, along with networking, connecting and socializing with others.

The VIP festival pass is $450, which includes The Spot, a private section with best views of the stages and access to the performers and to exclusive bars, a VIP buffet and special activities/performance on Friday plus a preferred entrance to the festival.

The South Point Arena & Equestrian Center hosts dozens of events throughout the year, including a couple of events which are free in May. May 19th through 26th they are holding the Wild Card Reining Challenge Horse Show, and the National Barrel Association Professional’s Choice Super Show is running from May 31st through June 3rd. Both events will include the Western Gift Show for your shopping pleasure.

Again, both events are free to the public, and parking is free at the South Point Hotel & Casino.

Tacos & Tequila (T&T) at the Luxor will host its 5th “Sexy de Mayo” fiesta in celebration of Cinco de Mayo from 6 to 9 p.m. This year’s edition is inviting guests to meet and mingle with international model and social media personality Carmen Ortega, to dance to the music  of Los Angeles-based mariachi band Mariachi Los Toros, and to enjoy $5 drink specials.

The Plaza downtown is planning a free Cinco de Mayo party under the bright lights of the entrance dome on Saturday, May 5 starting at 7 p.m. Entertainment will feature a Mariachi band, Folklorico dancers, eight Lucha Libre wrestling matches and DJ spinning top radio hits and Latin music. Festivities will include downtown’s largest piñata, with prizes and authentic food and drinks specials.

Freed’s Bakery, the featured bakery on Food Network’s “Vegas Cakes,” will create two festive cupcakes in celebration of Cinco de Mayo: the Tequila Sunrise and the Horchata. Each cupcake is $3.25.

Commonwealth, in the Fremont East Entertainment District downtown, will partner with the Vegas Golden Knights (VGK) Foundation to host a “Seersucker and Sombreros” party in celebration of the Kentucky Derby and Cinco de Mayo starting at 2 p.m. on Saturday, May 5. The afternoon will be celebrating the 144th annual Kentucky Derby with a classic mint julep, passed hors d’oeuvres, music by The Moonshiners Band, and the opportunity to win prizes by entering in a Derby hat competition. At 5 p.m., Commonwealth will open its rooftop patio for a Cinco de Mayo fiesta. Tickets to the “Seersucker and Sombreros” party are $20 online and $30 at the door with all event proceeds going to the VGK Foundation.

Latin award-winning artist Ramon Ayala will appear in concert at the Star of the Desert Arena in Primm on Saturday, May 5 at 8 p.m. Tickets start at $40.

Ayala is known as “El Rey del Acordeon (the king of the accordion),” which is an instrument he began playing at age six. He eventually performed in several notable bands before setting out on his own and forming the legendary band Ramon Ayala y sus Bravos del Norte. The group earned multiple Grammy nominations and awards including Latin Grammy awards for albums “Quemame Los Ojos” in 2001 and “El Numero Cien” in 2002.

Ayala has been in the music industry for more than 50 years and continues to be one of the leading influences of Norteño music.

Marilyn Monroe will be coming alive on stage when “Marilyn! The New Musical” opens at Paris in May with 20 original musical numbers. It will tell the sexy icon’s story from her days as Norma Jeane with a troubled childhood to her rise to stardom and eternal fame.

“Marilyn! The New Musical” is an original musical written, directed and produced by Tegan Summer, CEO of Prospect House Entertainment, in partnership with Authentic Brands Group, owner of the Estate of Marilyn Monroe. The resident Monroe will be played by actress-singer Ruby Lewis known for appearing in mainstream television series, “BAZ” in Las Vegas, and as The Leading Lady in Cirque du Soleil’s first Broadway show “Paramour.”

Other cast members will represent Norma Jeane and important characters throughout her short life, including husbands Joe DiMaggio and Arthur Miller. Preview performances for the show will begin May 23 with the grand opening set for June 1, which is Monroe’s birth date. Performances will be Tuesday through Sunday at 7 p.m. Tickets start at $49.

Bomb Tacos opened its new second valley location downtown at 616 E. Carson Ave. and celebrated with an explosive grand opening serving more than 300 guests in three hours with the first 250 receiving a free taco and soft drink. The look is reflective of an authentic taqueria with brightly colored furniture, corrugated tin walls, Mexican artwork, and hand-painted murals done by restaurant owner and executive chef Robert Solano. Hours are daily from 11 a.m. to midnight.