Besides buffets, another thing Las Vegas does well is implode hotels. So many of the grand casinos of the past 50 years Dunes, Sands, Landmark, Hacienda, Aladdin have been imploded, and now it’s time for the Riviera to join the list. The Riviera opened on April 20, 1955, and closed her doors for the last time on May 4, 2015. So stand aside as more Las Vegas history disappears via nicely choreographed dynamite. It’s something Las Vegas does well. 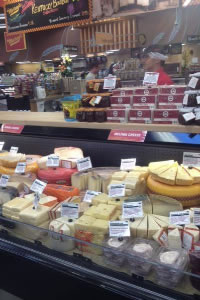 persnickety shoppers like me always stop at the Smith’s Grocery at 8180 Las Vegas Boulevard South because the only Murray’s Cheese in Nevada (“America’s best loved cheese shop”) is there. Murray’s is from New York’s Greenwich Village and carries more than 175 specialty cheese products, along with crackers, honey, oils, chocolates, olives, vinegars, pickles, and dried fruit. One-stop shopping at its tastiest.

We don’t just love our cheese here, we also love our chicken wings, so long as they’re the very best (that’s what I care most about). During Super Bowl XLIX, Americans ate 1.25 billion of them (that’s a ‘b’). Discriminating Las Vegans with a yen for the best, most delectable wings in town head for the Anchor Bar in the Grand Canal Shoppes at the Venetian. This is the only offspring of the Buffalo, NY restaurant where this iconic chicken wing originated way back in 1964. The wings are tossed in the traditional spicy hot sauce with celery and blue cheese dressing. They are superb, of course, and in fact in 2003, the James Beard Foundation recognized Anchor Bar Chicken Wings with an America’s Classics award.

While most people come to Las Vegas to enjoy all the sights, sounds, fun and excitement of the strip, others decide to explore the local areas outside of the strip corridor. And with the weather becoming unbearable for anything except swimming and indoor activities, it’s time to find somewhere cool to spend an hour or two so we do not fry to a crisp during the summer months.

Brooksys Bar & Grill on west Flamingo just east of Ft. Apache (9295 W. Flamingo Rd.) is just such a place. When I first visited there, I was amazed that the view from the bar was of a hockey rink. Not only was I seeing a hockey game in progress, but I found there are actually two ice 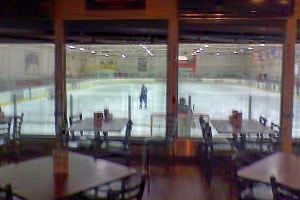 rinks connected to the bar. The hockey rinks are part of the Las Vegas Ice Center, which also has a separate entrance. The north rink is home to the Las Vegas Storm hockey team, and the south rink is used for ice skating parties, lessons, group skating, and open skating at various times during the day and on the weekends. Hockey is played every day, all day long, 8:30 a.m. until 10:30 p.m.

The bar also has plenty of seating at tables and booths with views of the hockey rink, plus excellent cafe food — entrees, sandwiches, burgers, salads, appetizers, and so on — and their pizzas draw rave reviews. Check out their website, where you can find Brooksy’s afternoon and evening menu plus their breakfast menu.