It’s heart month, and what could be more warming then getting together with your significant other and going to the Divine Café at the Springs Preserve? On February 10th, they are having their Couples in the Kitchen event which is the first event of their Friday Night Date Nights. This is an evening class from 6:30 until 9:30 where you will prepare a four course meal by direction of trained chefs. The non-refundable price is $89.00 for non-members; $80.10 for Springs Preserve members and includes cocktail and wine pairings for each course. You will prepare salads, risotto, Spanish Tapas, and your creation of a Portuguese dessert. Call for reservations since this is not a walk-in event.

So, maybe you want to just let your special someone enjoy fun with her girlfriends. You might suggest that she attend the Divas’ Day Out held on February 25th at the World Market Center on Grand Central Parkway & Bonneville. This is a large convention for women with everything geared towards women. They will have entertainment, beauty, fashion, fitness, health, jewelry, clothing, shopping … Need I say more? The event begins at 10 a.m. and ends at 4 p.m. This is usually a free event to enter; however, check the website linked above for final confirmation of the free event.

Since your other half was allowed to do a girls-day-out, the least they can do is to send you to the first WWE Monday Night Raw live at T-Mobile Arena on February 13th. (It’s the day before Valentine’s Day so you will not have any excuse for missing the special day with them!) The events start at 4:30 p.m. with tickets $30, $45, $55, and $65. The participants scheduled as of press time are TJ Perkins, Kevin Owens, Seth Rollins, Chris Jericho, Sasha Banks, Charlotte, Sami Zayn and several others. 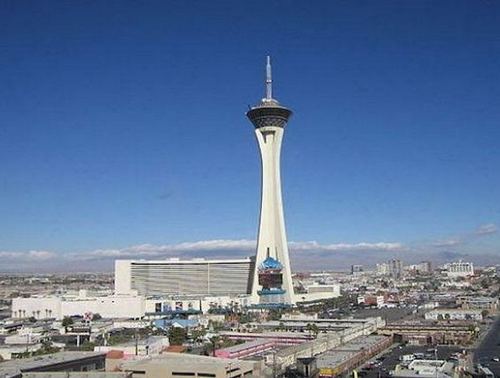 If the romance has not started in your life yet, and you are into MAJOR exercise, you can always go to the 9th annual Scale the Strat event on February 26th. This event is for the physically fit, since you must climb all 108 floors (which includes 1,455 steps, not counting the steps it will take you to get there) of the Stratosphere Tower. It begins at 7 a.m., which is another reason you must be physically and mentally fit to begin any grueling exercise at this unreal hour in Las Vegas. This is all for a good cause, since the money goes to the American Lung Association. If you contact the Stratosphere before February 17th you can get a discounted rate. 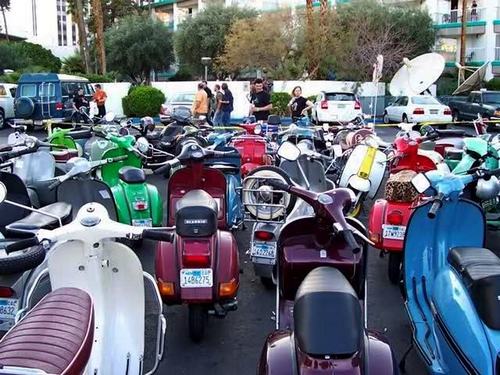 And how about getting together with some Brits to enjoy their High Roller Scooter Rally, which will have its official gathering at the Downtown Grand from February 23rd through 27th. This brings together US & UK scooter connoisseurs to have nonstop entertainment together with scooter outings. (Yes, the ones that are always holding up traffic!) There will be a poker walk, DJ’s & bands, food events, a custom scooter show, and trade events.

By the way, this might not be a good time to scold them about their driving habits.

Here’s another reason to love Las Vegas. Diamond Jack and Mrs. Jack welcomed 2017 by venturing from one Strip party to another. Sometime during the night (or early morning), we found ourselves on the 23rd floor Sky Lobby of the Mandarin Oriental Hotel. There, to my surprise, I discovered a vending machine dispensing 187-millimeter splits of Moet & Chandon Imperial Champagne — the same champagne served at the Golden Globe Awards. This is how you retrieve a bottle: purchase a $20 golden coin at the hotel registration desk, drop that coin into the machine, and then push the button for either a brut or rose mini bottle. Out comes the bottle with a champagne flute bottle topper so you can drink it now or on the go. The only other version of this unique vending machine is found in New York City. Happy New Year! (For more information on the Mandarin Oriental Hotel go to mandarinoriental.com) 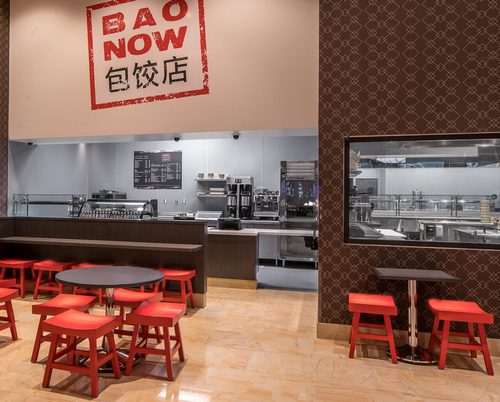 And speaking of New Year – well, Chinese New Year – the Lucky Dragon Hotel & Casino has opened just in time to celebrate the Year of the Rooster. Located at the north end of the Strip at Sahara, the Lucky Dragon is an authentic Asian cultural and gaming experience featuring 203-rooms, an indoor-outdoor Tea Garden, five Asian-inspired restaurants, and staff and signage to accommodate guests from throughout Asia. While touring the property, Diamond Jack discovered the 24-hour Bao Now restaurant, adjacent to the main gaming floor. The eatery features dim sum, soups, rice, noodles, congee, Boba tea, and other delicious dishes. Gung Hoy Fat Chow! For information go to LuckyDragonLV.com or call 702-889-7109. 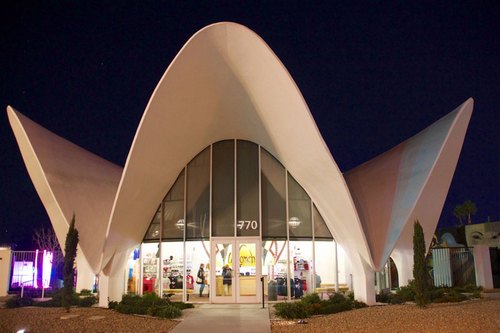 The early years of Las Vegas can be seen through its iconic signs and marquees. The Neon Museum is dedicated to collecting, preserving, studying and exhibiting those signs for educational, historic and cultural enrichment. The two-acre campus includes the outdoor exhibition space known as the Neon Boneyard and a visitors’ center housed inside the former La Concha Motel lobby. This is a family experience that tells the Las Vegas story of the ’50s, ’60s and ’70s. 770 Las Vegas Blvd. North. 702-387-6366. www.neonmuseum.org.

Carlos Santana Continues into Fifth Year at the House of Blues

Carlos Santana has announced additional 2017 performance dates in May, September and November of his “An Intimate Evening with Santana: Greatest Hits Live” show at House of Blues at Mandalay Bay solidifying the guitar legend’s fifth year at the intimate venue. Santana has sold more than 100 million records and won 10 Grammy® Awards and three Latin Grammy® awards over a more than 40-year dynamic music career. His upcoming dates are Feb. 1-4.

Tickets for Santana’s 8 p.m. shows start at $99.50. A portion of all tickets sold are donated to The Milagro Foundation created in 1998 by Santana and his family to benefit children worldwide.

The Mob Museum downtown will mark the occasion of its Fifth Anniversary with a series of celebratory public events planned Friday through Tuesday, Feb. 10-14. Also each day, the first 10 Museum guests will receive a commemorative chocolate package from Ethel M Chocolates. One out of the 10 will contain a special “golden ticket” redeemable for a grand prize. 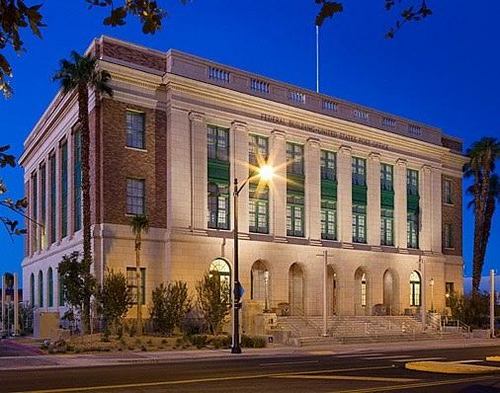 On Friday at 10 a.m. the museum will unveil a collection of St. Valentine’s Day Massacre artifacts that will go on permanent display. From 11 a.m.-2 p.m., there will be a United Blood Services Blood Drive.

On Saturday, there will be two presentations at 11 a.m.-noon and 1-2 p.m. by author Chriss Lyon who wrote “A Killing in Al Capone’s Playground: The True Story of the Hunt for the Most Dangerous Man Alive” about gangster Fred “Killer” Burke.

From 1-2 p.m. on Sunday, there will be a Panel Discussion: History of The Mob Museum Building featuring panelists including Robert Chattel, founder, Chattel, Inc., the historic preservation consulting firm which advised on the restoration of the historic federal building and post office occupied by the Museum.

All day Tuesday from 9 a.m.-9 p.m. will be free admission for Nevada residents and buy-one, get-one admission for non-locals. There will be two St. Valentine’s Day Massacre Evidence Presentations 11 a.m.-noon and 1-2 p.m. Chriss Lyon will do book signings again from noon-12:30 and 2-2:30 p.m. From noon–8 p.m. there will be a celebration at The Commissary at Downtown Grand across the street.
During the five years, the museum greeted more than 1.3 million visitors from all 50 states and 36 countries. 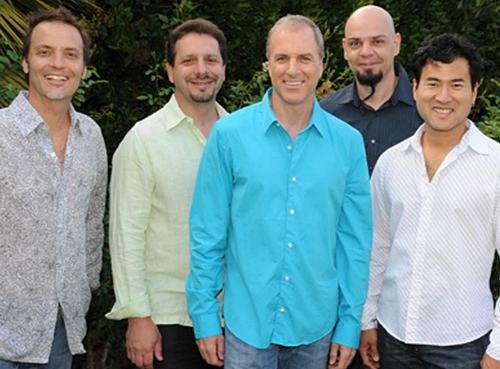 Grammy Award-nominated jazz musicians The Rippingtons are booked at Aliante in the Access Showroom Saturday, Feb. 18. Tickets start at $39.50 for their 8 p.m. show.
Formed in 1986 by the group’s only original member, Russ Freeman, who still helms the group, The Rippingtons have been performing jazz music for more than 30 years and released nearly 20 albums. Their most recent album is “True Stories” released in June 2016.
In the early 1990s, the group revealed its first No. 1 album, “Welcome to the St. James’ Club.” The group’s 15th album, “Modern Art,” was nominated for a Grammy Award in 2009 for Best Pop Instrumental Album. 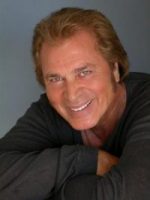 Engelbert Humperdinck, who has sold 140 million records worldwide, will make a stop with his 50th Anniversary Tour at The Orleans Showroom Feb. 25-26 at 8 p.m. Tickets start at $54.95.

Humperdinck found early success in Europe in the mid-1960s with the hit single “Release Me,” which spent 56 weeks in the Top 50 of the U.K. charts and reached No. 1 in 11 countries. Humperdinck continued producing hits in the 1970s including “After the Lovin’,” which became a Top-10 single in the United States and earned Gold. His album of the same name was a Double-Platinum success.