Topgolf plus Blackjack at The El Cortez 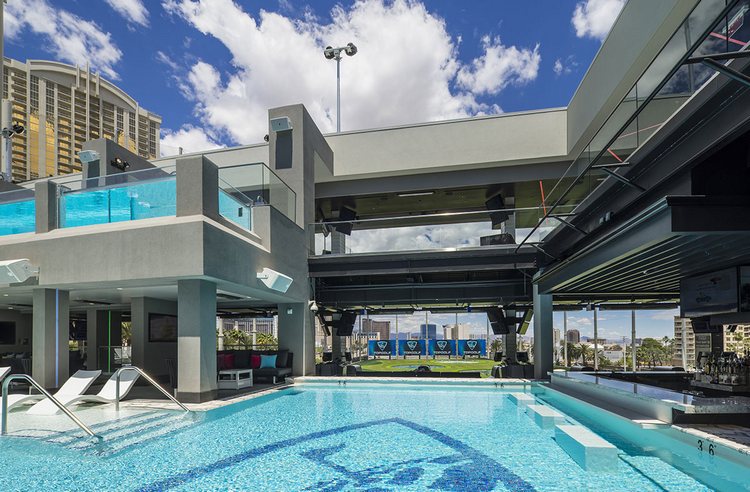 Diamond Jack doesn’t golf anymore. After several years of chasing the small white ball around 6,500-yard golf courses, I came to the realization that those five hours could be put to better use in a variety of ways, such as eating, drinking and reading. But I have since discovered Topgolf, an 8-acre playground just behind the MGM Grand. It opens daily at 8 a.m. and is truly a one-of-a-kind entertainment experience on the Strip.

Topgolf has 108 climate-controlled hitting bays, two pools, cabanas, a concert venue, hundreds of HD televisions, VIP suites, five bars, mobile Sports Book, a comfort food menu, and Callaway Fitting Studio and retail shop. Now I hit golf balls containing computer microchips that track each shot’s accuracy and distance while awarding points for hitting targets on the outfield. The hitting bays have lounge-style seating and can host up to six players at one time. Topgolf spans four levels (105,000 square feet) and is designated as the biggest Topgolf venue in the country. Of course – it’s Vegas. General admittance into Topgolf is free. Bay pricing starts at $30 per hour, depending on bay location and time of day. 4627 Koval Lane. 702-933-8458. www.topgolf.com/lasvegas.

The El Cortez is the longest continuously run hotel and casino in Las Vegas. For over 75 years, it has maintained its original, historic exterior façade, famous signage and classic ranch-themed architecture. It now has the distinction of being officially certified as “Best Blackjack Odds in Las Vegas” and the “best spot to double-down in Sin City.” The casino offers single-deck and double-deck games with a 3:2 payment, as well as double-down on any two cards. Players of the double-deck games can double after splits. Both games are available 24/7. It also offers guests the convenience of Gambling Gourmet which means you can dine and play and win all at the same time. This is so much better than golf. Gambling Gourmet is daily from 7:30 a.m. to 10:30 p.m. 600 Fremont St. 702-385-5200.

There is always a flood of things to do in Las Vegas, especially during Monsoon Season, which runs from July through early September.  I mention the Monsoon so that you will be extra cautious during August for any rainfall that should hit within the valley and in the mountain ranges surrounding the valley.  What is a beautiful, sunny day can suddenly turn deadly in the valley if storms are hitting the mountains.  All that water runs west to east towards Lake Mead and usually takes the path of east/west streets and can carry all sorts of things, like branches and garbage, wiping out cars and pedestrians.  So watch out for Charleston, Sahara, Spring Mountain, Tropicana, Russell, and the major intersections of those streets where water pools.  We want you alive when you leave Las Vegas.

Kumukahi Ukele and Hula Festival will take place at Sam’s Town on Boulder Hwy. & Flamingo Rd. (East) beginning on Friday, 8/12 at 2 p.m. & on Saturday, 8/13 beginning at 8 a.m. This is their 4th annual Ukelele & Hula festival which honors Hawaii’s culture with musicians from across the country. There will be two days of music and dance with a price of $25 per ticket plus tax & fees.

After the Hawaiian culture I want you to completely rearrange your culture shock by going for dinner at Billy Bob’s Steak House in Sam’s Town. If you are an early bird eater get there between 5 and 6 p.m. for their $12.99 prime rib special. If you typically like late night meals go from 9 p.m. until before close. During that time they offer a steak & lobster special for $14.99 if you have their B Connected players card (which is free to obtain). Whatever you happen to order at this restaurant will be a HUGE portion.

Following the Pokemon Go craze can result in injuries.  To try something along those lines but learn about Las Vegas, the Amazing Scavenger Hunt Adventure is going on every single day in August and September from 10 a.m. until 8 p.m.  This is on my to-do list and it promises to combine the excitement of the Amazing Race with a tour of the city for 3 hours.  You would gather a team of 2 to 5 people (no more than 5) using your Smart Phone to learn about local history by solving clues and completing challenges.  You would play at your own leisure starting whenever you are ready at City Center.  There will be around 23 questions and 3 bonus questions.  The “tour” is approximately 2 1/2 miles and could include our RTC system, bus and monorails and will be in and out of hotels. Tickets start at $30 for 2 people on a team., $38 for 3, $44 for 4 or 5 people.

There is also another team building event for The Strip or Downtown Las Vegas called The Hunt Las Vegas which can be done at any time, for any number of people (even just a couple) and you can do this on the Strip or Downtown.  This event has been used by corporations for team building and for large groups of vacationers to do something different in our surrounding area. 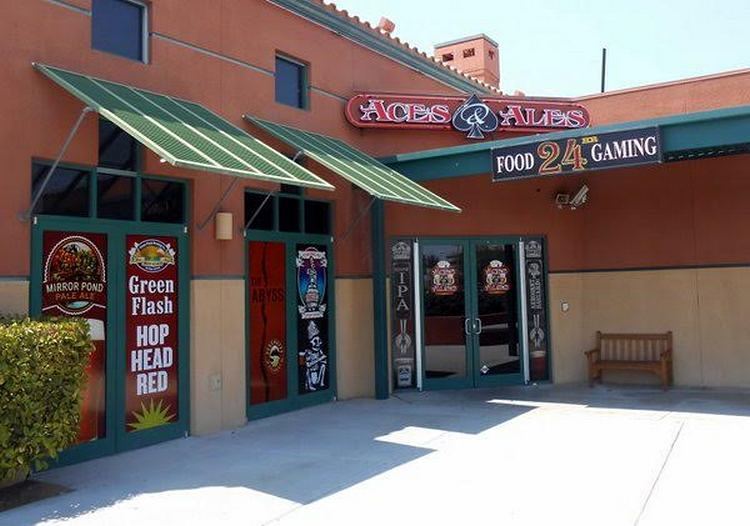 On Saturday, August 13, Aces & Ales is hosting their 7th Annual Strong Beer Festival at their Tenaya Way location, south of Cheyenne Avenue at the N.W. corner of N. Tenaya Way & Peak Drive. It starts at 3 p.m. and ends whenever they decide it ends. This is one of their craft beer festivals that usually runs for 3 days at their Nellis location. The Nellis location previously charged $15, which would give you a commemorative glass and your first of any of the international beers.  Their selection would change at noon each day.  Each beer taste after that had a price of $4. If you did not want to pay the $15 you could choose a “goblet” of beer for $9. Even if you do not make this festival you should stop in at their Tenaya location during your travels. They normally have 50 rotating beers on tap from Delaware to California to Illinois to North Carolina to Alaska, and their food is — usually — excellent for bar food (try their Eddie Spaghetti Pizza, their Bacon Jammy-Jam with crostinis, A.B. Cheese Balls, Fried Oreos … (I could go on.) If you go during one of their two happy hours you can get drafts, specialty cocktails and food (like Beer Belly Grilled Cheese) for $5. They also have Tuesday night trivia for your enjoyment and lunch specials.

News about “Mystère” at Treasure Island

“Mystère” is the original Cirque du Soleil production in Las Vegas that led to the Quebec-based organization started in 1984 from a group of 20 street performers to have seven permanent resident shows in Las Vegas. A special deal for the summer is tickets starting at $49.50.

The show at Treasure Island features an international cast of 75 artists performing high-energy acrobatics. An invigorating change is a new version of its famous Teeterboard Act. Making this rendition even more exciting, the act has a new teeterboard, more powerful acrobatic sequences, faster paced choreography and new artists. The new board is shorter and catapults artists higher and faster into the air, soaring to impressive heights of nearly 20 feet.

A rare opportunity to observe cast members rehearsing is happening every Saturday from 3 to 3:30 p.m. and Sunday from 4:30 to 5 p.m. In addition, guests attending receive an exclusive offer—a voucher for two tickets for $99 that can be presented at the box office.

Two opportunities to meet a “Mystère” cast member and take photos with them will happen on Tuesdays, July 26 and Aug. 9 at 5 p.m. Free and open to guests of all ages, the meet-and-greets will take place at the Mystère Theater.

The media had an opportunity to see about an hour presentation by ex-CIA agent Jason Hanson, who will begin

giving his two-day Spy Escape & Evasion seminar and training session in the Stratosphere Theater Aug. 17-18 and 19-20.
Hanson is extremely likable and knowledgeable. His life-saving information is really powerful, and the audience is captivated. In less than an hour we learned how to escape rope, duct tape, zip ties and a little about being a human lie detector. What we experienced was the tip of the iceberg of safety tips. After almost a decade in the CIA, Hanson brings real-world spy safety experience and techniques direct to participants, teaching critical skills and valuable information that 99 percent of Americans will never know or have access to learn, until now.

The ticket price is steep at $1,499.95 per person, but it would be worthwhile. Visit www.TicketBAT.com.
In addition, participants can also take part in a special VIP dinner and meet and greet with Hanson at Las Vegas’ El Dorado Cantina for $250.

The Neon Museum downtown is now carrying a limited-edition Fossil watch that was inspired by the iconic landmarks created by pioneering sign designer Betty Willis. The watch, which is available in the museum’s gift store and online, comes with a commemorative booklet dedicated to Willis’ distinctive life (1923-2015) and achievements.

Fossil’s creative director Kaspar Spurgeon Heinrici visited the museum in 2015 and was inspired by the impact Willis had on mid-century signage design and the lasting effect her creations particularly the Welcome to Fabulous Las Vegas sign have had on  the world. Willis never copyrighted the famous gateway Welcome sign done in1959.

The face of the watch sits in the center of two intersecting pieces in gold and silver tones, which reference 1950s and 1960s-style design elements, namely the arrows.

Fossil is an American watch and lifestyle brand since 1984 inspired by all things curious.